Time to explore more of the surrounding area, so we loaded into the car and headed toward Pincher Creek. Suddenly we noticed cars stopped in the road. A young bear was moving off into the bushes. I was too late to capture much of a shot, but Karen managed to get this one. 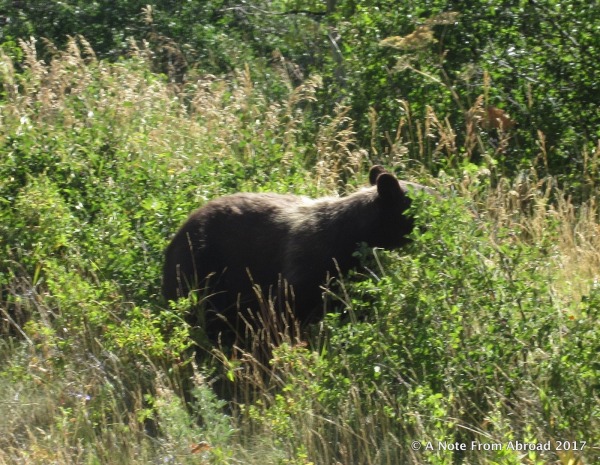 They say that you can identify the type of bear by their ears, back hump or rump, shape of the nose and claws. Since I don’t have much to go on here, would love any bear experts to chime in to let us know if this is a grizzly or black bear.

We took a slight detour to drive through the Bison Paddock that is still within the parks boundary. 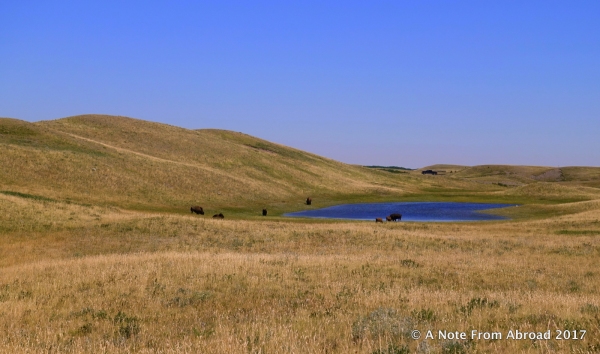 The bison paddock was really nothing more than a large fenced in area with a few small lake ponds and maybe twenty head of bison. Having seen so many of them in Yellowstone, this was a bit of a disappointment. Still if someone had never seen them before, it might have been a thrill.

Now if these had just been moose… 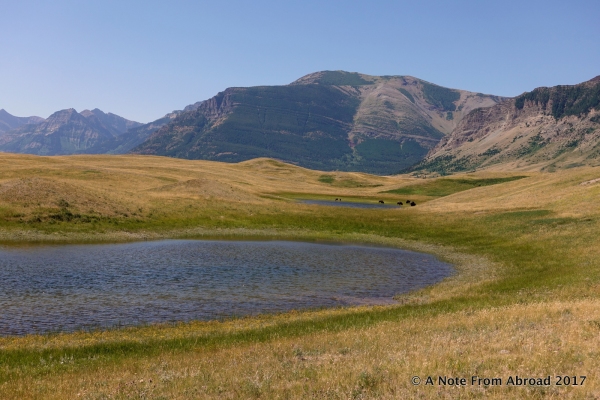 More Bison in the distance

After we left the park, we climbed the hill for a fabulous view of where the mountains meet the prairie called Waterton Park Front

Where the mountains meet the prairie

The small town of Pincher Creek has a funny story behind its name:

“The town received its name in 1868 when a group of prospectors lost a pincer in the small creek at this location. These pincers would have been used as a mechanism for trimming the feet of the horses and thus had some value to the group. In 1874, the North-West Mounted Police came to southern Alberta. One of them discovered the rusting tools in the creek, and they named the area Pincher Creek.” ~ Wikipedia 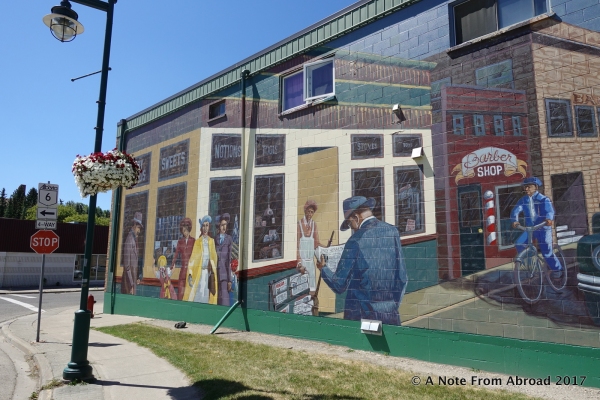 Telling a story of life in Pincher Creek

Sleepy village meets tourist hangout. And what could be more appropriate than having a chat with the local Mountie. He was so excited when he found out we were from California. His daughter went to college in San Francisco, and just took her bar exam a few days ago. Now the long wait for the results. He was such a proud dad!

And another typical scene in and about town – deer can be found most anywhere. 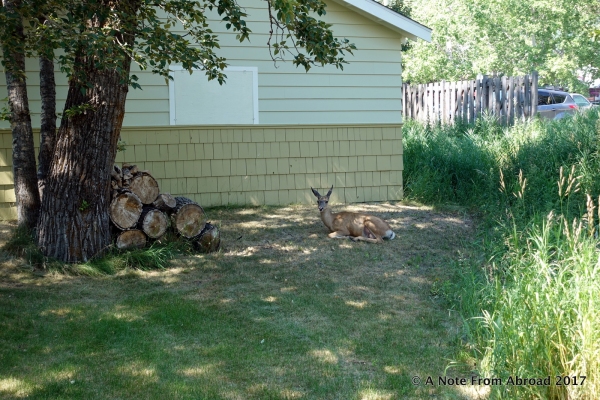 Just making itself right at home on someones front lawn.

Our time was coming to an end with Dick and Karen as they were planning on departing early the next morning. But before they left, we decided to have an early joint birthday celebration to honor our guys. Tim’s birthday is August 2nd, and Dick will hit a special milestone when he turns 80 on August 18th.

GRATITUDE MOMENT: Today I am grateful that we got to have two fabulous weeks together with dear friends exploring both Glacier and Waterton Lakes National Parks. We  figured out that Canada was the sixteenth country that we have visited together.

Hi and welcome! We are Tim and Joanne Joseph and we have just embarked on our "next chapter". At a stage in life where traveling the world, taking pictures, and sharing our adventures with friends and family will be our dream come true.
View all posts by Tim and Joanne Joseph →
This entry was posted in Canada, Photography, RV Life and tagged Bear, Bison Paddock, Canada, Dear, Photography, Pincher Creek, Road Trip, RV Life, RVing, Travel, Wall Murals, Waterton Lakes National Park, Waterton Village. Bookmark the permalink.