Remington Carriage Museum ~ Have you ever had a museum all to yourself?

Finding the largest collection of horse-drawn carriages in North America in the tiny town of Cardston (Alberta, Canada), with a population of just over 3500, is not what one might expect. 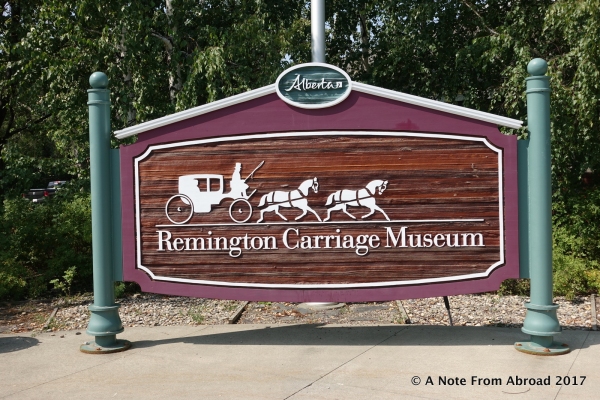 The story begins back in 1954, when the local Rotary Club asked Don Remington to be in charge of the annual Santa Claus parade. In the past, Santa had arrived in the back of a pick-up truck. He thought a better idea was for santa to arrive via a sleigh. Finding an old Cutter, putting a fresh coat of paint on it, and a new tradition was born. 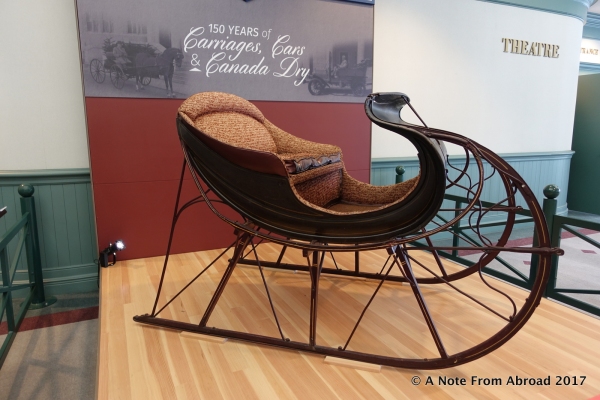 “Cutter, lightweight, open, horse-drawn sleigh, introduced in the United States in about 1800. It usually had a single seat that held two people, but some contained a second one, which could be removed or jumped out of the way when not in use, for two additional passengers, and some had a child’s seat that folded out when needed. They have been made in many different styles, but most have gracefully curved runners and decoratively coloured bodies. Cutters are still used occasionally in winter as a form of recreational transport, most often in the northeastern United States.” ~ Britannica.com

Over the next 30 years, Mr. Remington collected and restored 49 horse-drawn vehicles. As he neared the end of his years, he offered them to his sons who were not interested. In 1985, he made an arrangement to donate them to the Government of Alberta with the understanding that a building would be constructed to display his collection.

With additions and some pieces on loan, the museum now houses over 270 horse-drawn sleighs and vehicles.

There is also currently a special exhibit about Robert McLaughlin, who turned his sleigh building hobby into the largest carriage manufacturer in the British Empire. His sons, Sam and George took it to the next level with motorized vehicles with McLaughlin-Buick and later General Motors of Canada.

In the meantime, son J.J. McLaughlin had a better idea of putting bubbles into water and started a company he called “Canada Dry”.

This is the 150 year anniversary of the McLaughlin empire, which coincides with the Canada 150 celebration, which makes this a fitting temporary exhibit for this museum.

With our background in the wheel and tire business, I loved this one.

I was surprised how much I enjoyed taking my time and reading the stories and details about many of the items on display. There was so much history.

Back in the day, life was governed by horse-drawn vehicles. They provided transportation of course for people going visiting, to church, or to get supplies. Farmers depended upon them to work the land as well as transport products to town markets. Ice or milk was delivered, laundry picked up and returned to hotels and restaurants. Get the kids to school, a hearse to deliver the body to the cemetery, Doctors and veterinarians used them to make house calls. 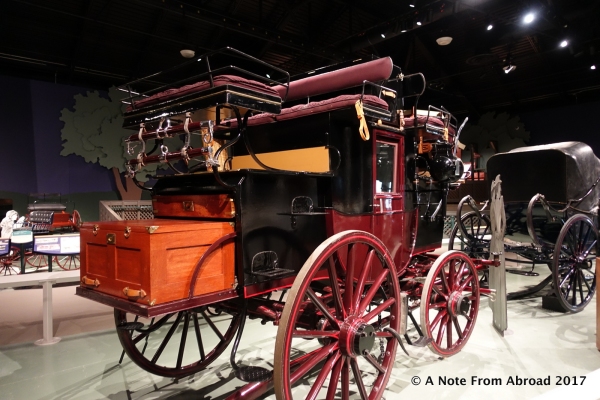 There were also some hands on displays where we could climb up into the driver’s seat of a wagon, take the reins and learn virtually how to “drive” a team of horses. Or hop on board a stage-coach and pretend you were back in the wild west coming across the prairie to a new home. 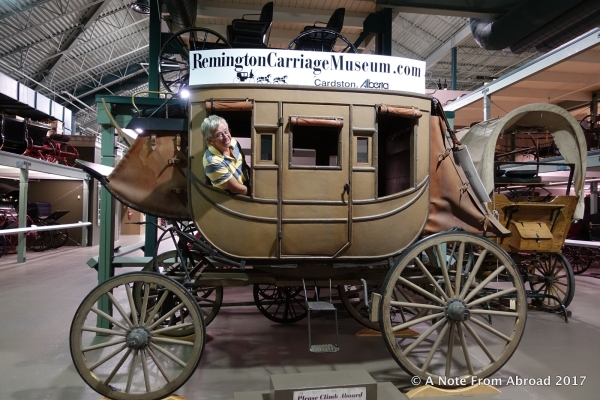 The tack room was well laid out, but I wanted to get some saddle soap, wax and oil out for a few of the pieces that appeared to be dry.

Their on-site renovation room was equally fascinating. Instead of looking from behind a glass wall, you are invited inside where you can visit and ask questions of the two artisans who are in charge of the restorations.

I was astonished to learn that only two men did all of the work that ranged from woodwork, construction, carpentry, upholstery, making wheels, metal work, painting, and so much more. Talented tradesmen for sure.

An extreme example of a “before” and “after” restoration/reconstruction was when just a handful of pieces were presented that had been found in a field. From those few items, an entire carriage was recreated.

After learning so much, I was gifted with a ring that was custom-made for me from a horseshoe nail as we watched. It was called a “Prairie Diamond”, as back in the day, when coming cross-country, if a fella wanted to ask a lady for her hand in marriage, there was simply no place to purchase a proper ring. So, the solution was to ask the local blacksmith to make a simple ring, with the expectation/hope that someday it could be replaced with a real diamond.

Prairie Diamond on my hand (OMG time for another manicure)

There is also a theater which shows a short clip about the history of horse-drawn vehicles, as well as one about the famous horse, Seabiscuit.

The jockey who rode Seabiscuit in “the race of the century” was George Woolf, a native son of Cardston. A beautiful life-size statue of horse and rider decorate the grounds. 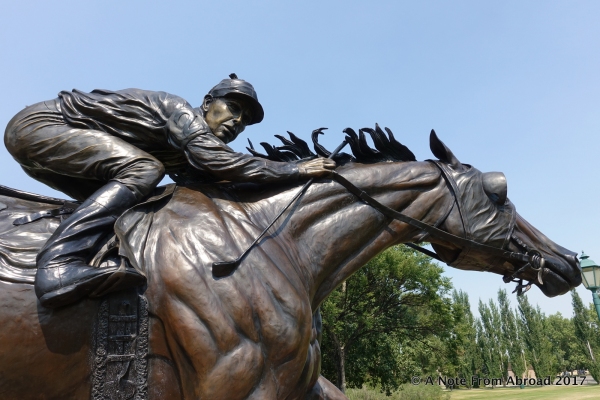 There is also a working stable with carriage rides offered, a gift shop and a cafe.

One more thing that astonished us – we had the entire museum almost to ourselves. Coming from a big city where we are used to having to wait to see the premier pieces, get in line, or try to be patient, this was such a treat. We were the ONLY ones in the theater, and joined by one family of four on the McLaughlin tour, and a couple came into the renovation room at one point. A lone male photographer wandered one room and that was it!!!

This museum is only 33 miles from Waterton Lakes National Park, so a great side trip for the day, or a good place to stop off on your way to Calgary.

Two thumbs up from this lady!

Yellow fields and hay on the drive toward Fort Macleod

Another short 38 mile drive brought us to the town of Fort Macleod where we plan to overnight. 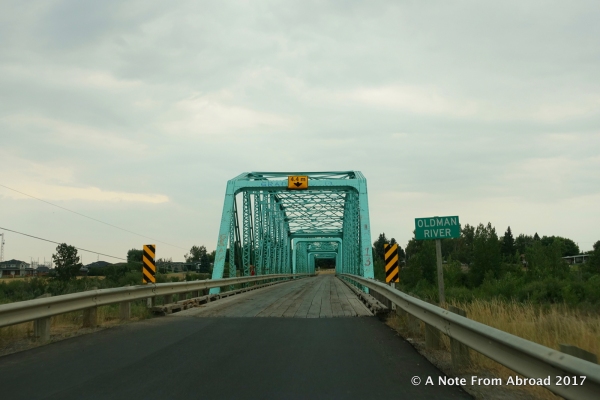 One lane bridge at Oldman River in Fort Macleod

OVERNIGHT: We parked Ellie Mae at Daisy May Campground in Fort Macleod. Next Gus will want us to find a park named just for him.

GRATITUDE MOMENT: Today I am grateful for the fun new piece of jewelry I am sporting on my right ring finger. Not everyone can claim to have a “Prairie Diamond” 🙂

22 Responses to Remington Carriage Museum ~ Have you ever had a museum all to yourself?