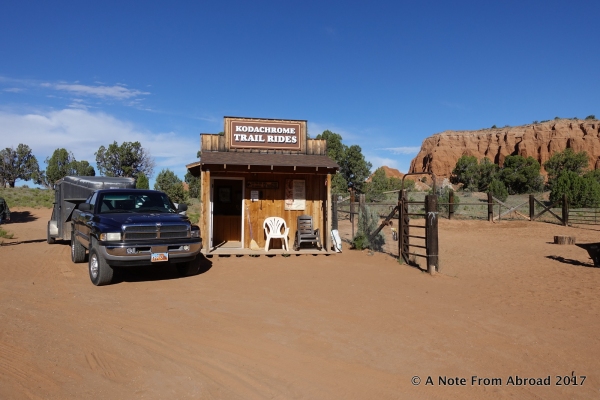 Tim and I were the first to arrive. Soon Jerry pulled in with an empty horse trailer. She pointed to the dirt road behind us and said that Steve would be arriving shortly with the horses.

Steve arrives with our mounts

Steve matched each rider up with an appropriate horse. My sweetheart was Sandy Bob. 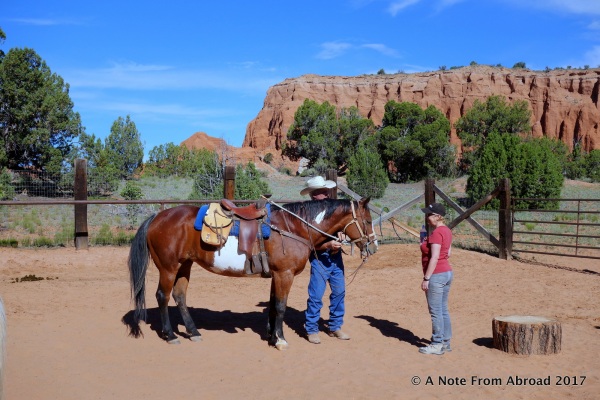 Tim drew Annie, one who needed a bit of encouragement to keep up with the rest, preferring to nibble on the enticing greenery along the way. She also had a bit of a flatulence problem, or at least Tim claimed it was the horse 🙂

Staying just a bit behind the pack however had an advantage of less dust in your face. It is dry and we were quickly covered in a reddish haze.

The ride itself covered the Panorama trail plus an extension that took us over to the entrance of a slot canyon. 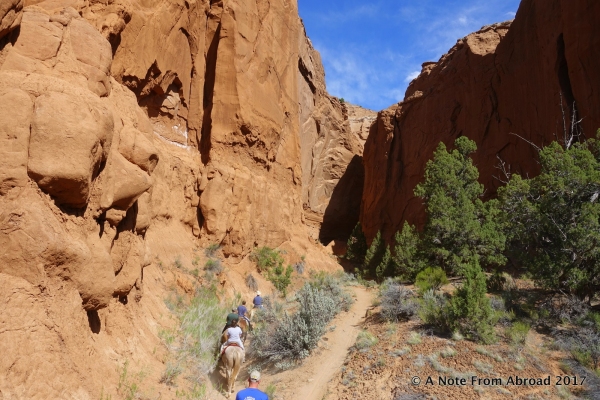 The slot was not nearly as scenic as Antelope Canyon, but I still got a kick out of riding a short distance inside.

Inside the slot canyon on horseback

The horses were well-behaved, and I’m quite sure I could have given mine her head and she would have simply followed the pack. Steve did mention that he had his four-year-old granddaughter on her last week.

I’m only half comforted by that as I’m guessing she has ridden ever since she could sit up in this family.

Stone figures dot the landscape, many with entertaining or descriptive names. By this point in the ride I am having enough trouble remembering my horses name, let alone the names of rock formations. 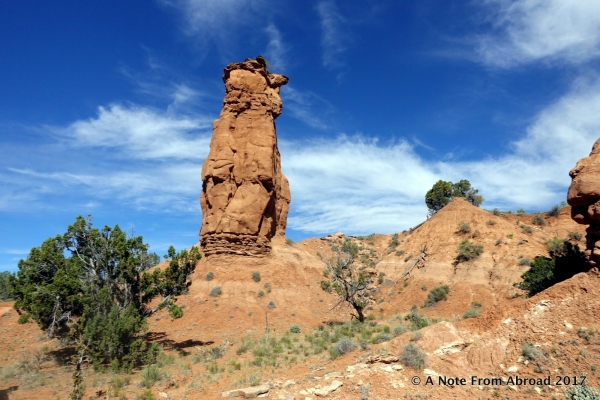 One of many formations along the ride

One was named after the Travelocity Nome, but I don’t think it was this one… 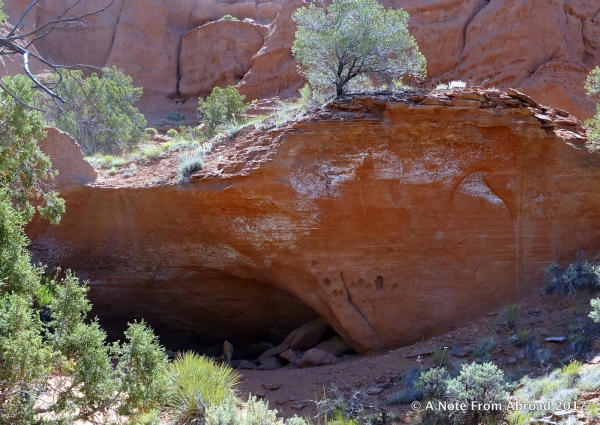 This one was called Indian Cave. It has ancient handprints on the side.

I mentioned my slip on the pathway yesterday and concern that my hind end might be a bit tender today for sitting in the saddle for so long – especially taking into consideration that I have not ridden in over 30 years.

I was so surprised to find that part of my anatomy held up fine. It was my KNEES that started screaming. I suspect that my stirrups were just slightly too long. By the time we got back to the corral, I was wondering if they would hold me up.

Somehow I managed to coax one leg over the top of the saddle, and gingerly slid down the side of my horse. I was thankful that Steve was there to add his support, as my legs had turned to jelly. I know I was a laughable sight to watch as I waddled and staggered to the gate.

Tim seemed to find some measure of humor in it at my expense. That afternoon hike we had planned I think has just gone out the window! 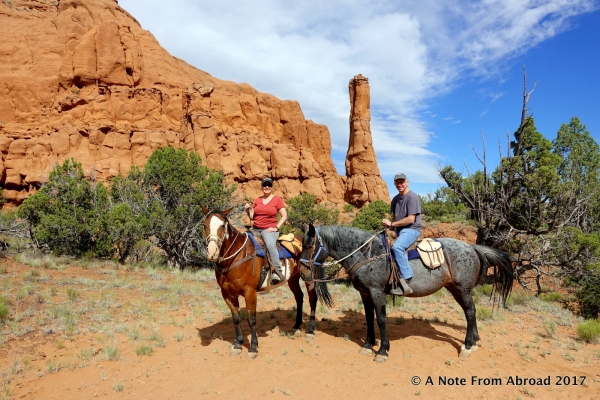 Back at the RV, we get rehydrated and after a bit I am recovered enough to slap together some dill egg salad sandwiches with arugula and warm up the leftover home-made chicken soup. At least we are eating well.

As I sit typing at my keyboard, I can see the same chipmunk out my side window that I watched a day ago, munching on juniper berries. It has staked its claim to these few branches, and chases off any intruder. I think I understood Steve say these berries are used in the making of gin.

Tim is already having a nice nap. I think I will shower off the morning dust and join him…

GRATITUDE MOMENT: Today I am grateful for Motrin and ointments 🙂