Whitstable ~ Raw oysters on the half shell and Cats

Our morning breakfast was more of the juicy, sweet flat peaches.  The juice rolling off your chin type.  The OMG this is the best peach I have ever eaten type.  We can walk out our hotel door and 1/2 block down the car-free walking street get a handful off of a fresh fruit cart.

We put our adventure shoes on and hopped on a local bus for a day trip to the nearby coastal town of Whitstable.  Sitting up top on a double-decker bus is a great way to see some of the neighboring countryside, buildings, sheep in the pasture, gentle rolling hills and small towns.

The “Triangle” bus offers a 1 day or a 1 week explorer pass that allows you to use the busses through out Kent as much as you want.  We got the one day pass for just over 6 pounds. 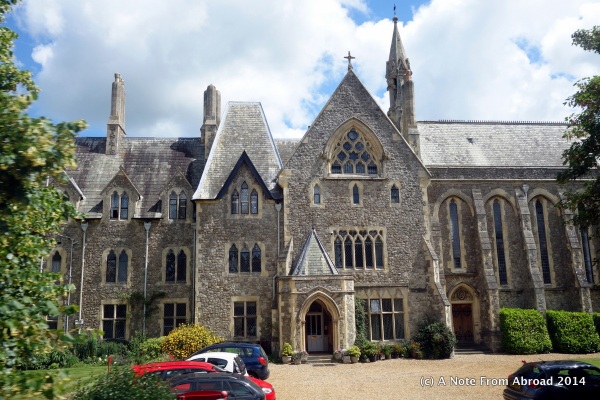 Building we passed on the way to Whitstable. I think it is a school.  (Local Hogwarts?)

Whitstable is a sleepy fishing village situated on a rocky beach.  They are famous for their fresh oysters, which are raised right offshore, lobster and several other varieties of fish.

On the bus we met a couple of actors that are currently performing in “Cats” at the Marlowe Theater in Canterbury.  Nicholas Pound (Nic) plays the lead “Old Deuteronomy” and Barry Haywood is his understudy.  Nic recommended a restaurant, The Lobster Shack, to us in the harbor, and since I had never tried raw oysters, I thought this was the perfect opportunity.  You can’t get them any fresher than this! 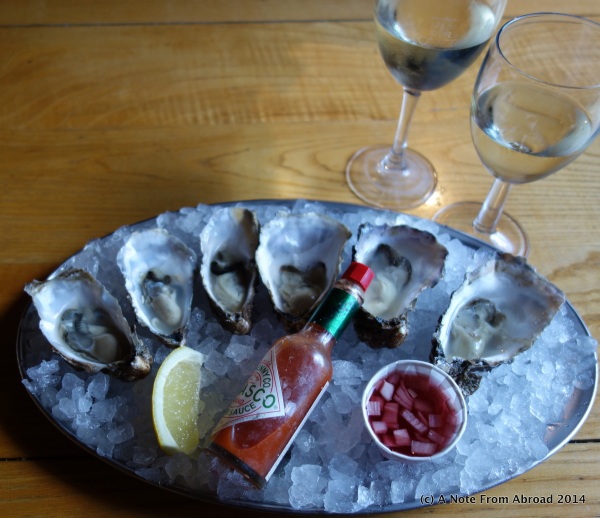 How the Rock oysters were served – On a bed of ice with lemon, tabasco, and a mixture of shallots and vinegar

The 1/2 dozen came to £7.50.  They were much better than I thought they would be and I would definitely try them again.

The shoreline is rocky, and not what I think of as a “beach”.  The harbor area is lined with colorful fishing huts, some that have been converted into overnight rental units.

The oyster shells are recycled and replanted in the sea

Through the window at the restaurant

Purple flowers (did I mention that I love purple?)

We took the bus the long way home, via the town of Herne Bay to see more of the area.

After meeting Nic and Barry, we decided that if we got back to Canterbury in time, we would see if we could get tickets for the evening performance.  As we entered the lobby of the Marlowe Theater, there was Nic, sitting waiting on Barry who had taken a detour to the  police to turn in a wallet he had found on the bus.

Nic walked with us to the window and since he was part of the cast, got us a discount on the tickets.  What a lovely gesture.  The play was almost sold out, but we managed to get front row in the upper balcony.

Tim took a picture of me with Nic before we headed out for dinner and to change before the play. 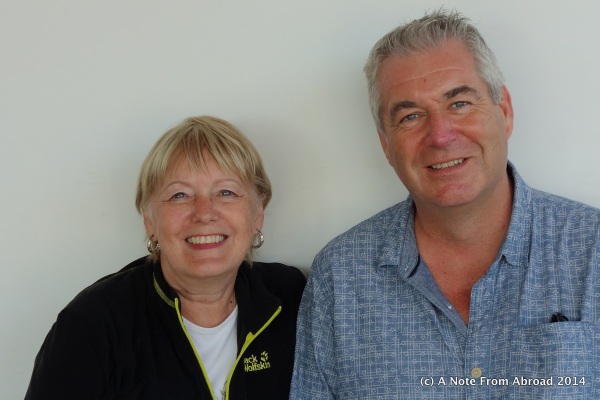 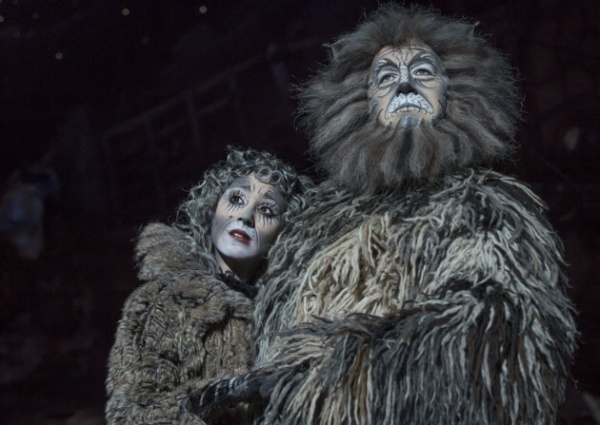 I took a picture of the set before the play began.  Old Deuteronomy signed my program for us at intermission.

The play “Cats” has always been a bit of a mystery to me.  This was my third time seeing the play and the storyline still confuses at times.  What I most enjoy about it is watching the cast interpret the movements, attitude, playfulness, and disinterested behavior that only a cat can do.  The singing and dancing were excellent.

Having someone on stage that you have met gives an added dimension to the performance and I loved watching Nic in his role.  He has a wonderful voice, as does Sophia Ragavelas who plays Grizabella and sings the classic song, Memory.

I love these unstructured days where we just let it unfold.  When we got up, I had no idea that by the end of the day I would try raw oysters, walk on a rocky beach and see colorful fishing huts, meet two actors and attend a fabulous play before the day was over.

Gratitude Moment: Today I am grateful for surprises around every corner.  Tim and I discussed this evening how delightful most days turn out if we are simply open to “possibilities”.

Hi and welcome! We are Tim and Joanne Joseph and we have just embarked on our latest adventure. We hope you will join us!
View all posts by Tim and Joanne Joseph →
This entry was posted in England, Europe and tagged Canterbury, Cats, England, Fishing huts, Kent, Oysters, photograph, Theater, Travel, Whitstable. Bookmark the permalink.