Originally we thought we would take the train or a bus to see Leed’s Castle today, but we got a late start and decided to go to the closer Dover Castle instead.  Our weather has held out and we have had lovely sunshine with temperatures in the mid 60’s to mid 70’s all week but there is a threat of some rain late in the day.

I’ve written about how nice the busses are here, but thought you might be curious to see what they look like inside: 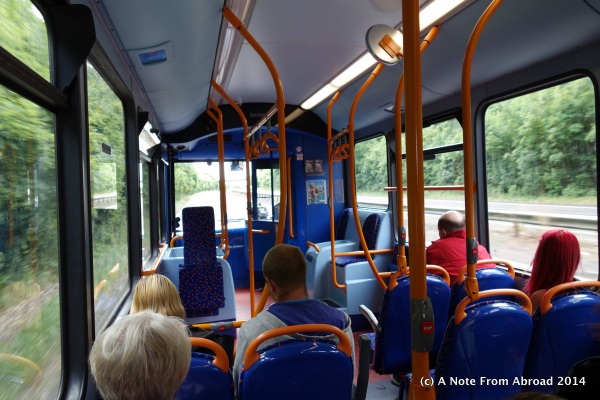 This one is only one deck, but many we have taken are double-deckers which provide an even nicer view.  There is no narration on these busses though as this is just transportation and not considered a “sightseeing” trip.

The countryside is green and we pass by a variety of homes and shops, but most of the area is open pasture or fields of crops.  One field looked like rye, another like potatoes.

Green fields as we zip by on the bus

By the time we reached Dover, we were hungry for lunch so walked from the bus terminal a few blocks to the heart of the town.  Walked down Cannon Street and passed by St. Mary’s Church.  We had a disappointing meal which I abandoned after two bites. Thankfully Tim shared his cheese and tomato Panini with me. 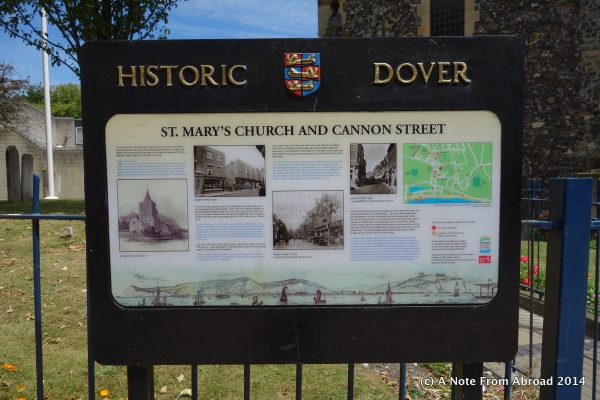 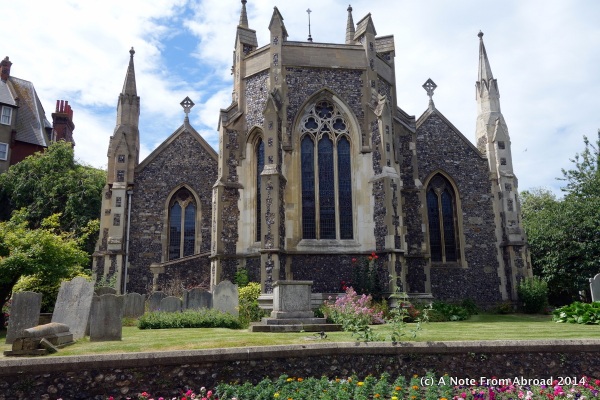 A few minutes later we were back at the bus station to catch our connecting bus up the steep hill to the castle.  Dover Castle sits on the white cliffs, high above the harbor and affords magnificent views of the area.

I’m standing on a bridge looking down into the narrow stream waiting for our bus to arrive when I hear a scrape, scrape, scrape sound.  A very elderly tiny man walks up to me to ask where to catch the Sturry bus number 15.  He is not much more than my height, 5’2″, since I am about eye to eye with him. I guess his age to be from the mid 80’s to early 90’s . Wearing an old plaidish suit that was in style maybe 50 years back, and clutching papers in his hand, I let him know that there are several places to wait for the busses, and that I was not sure about the city he mentioned.  Seeing a couple more ladies ahead, he shuffles over to ask them the same question.

And by shuffling, it was more like pushing his heavy shoes along the ground, as he did not pick up his feet in any manner that I could see.

About 10 minutes later our bus arrived to take us to Dover Castle.  He climbed on the same bus and by way of eavesdropping on his conversation, found out he was going to Dover Castle as well.  The papers he was carrying included information on the castle, hours of operation and tours.

The bus drops us off on the main road, but we still need to walk a fair distance up the hill. Not far for someone young and healthy, but not an easy jaunt either.  I am worried about him making the climb, as he slowly followed behind us.

A couple approached us along the way that may have been homeless or high or both.  Their speech made no sense.  Tim and I passed by, but we watched as they joined the old man. Tim and I slowed to observe that he was OK.  A minute later they abandoned him and the three of us moved on.

At the entrance ticket gate Tim and I had decided to get a yearly pass to the English Heritage Sites.  The senior version for a family was £60.  If we had just purchased the admission tickets for this ONE site alone would have come to £39.90 for the two of us. Since we will be staying in England for a while after our cruise, we are hoping that the yearly pass will get put to good use.

The old gent finally makes it to the top of the hill as we are almost done completing the paperwork to join.  He offers up £10, to enter and is advised that is not enough.  He shows the papers in his hand and says this is what the papers say – £15.80.  He went on to explain that he had been trying to get here for over 20 years.  He wanted to see the spot where Churchill stood and watched from.

The clerk took his money and off he went.

The ladies on the bus told us that the secret underground tunnels were especially interesting and that there were guided tours through them offered at scheduled times. This sounded good, so after a stop in the cafeteria and shop, we headed in that direction.

Coming out of the cafe, we spotted out Old Friend, slowly heading our direction.  We had noticed a sign where an in-park “train” was available to take one through the over 80 acre site.  I walked back up the hill to where he was by now sitting and resting and asked him if he was getting tired of all the walking and offered the train option to him.  He let me know in no uncertain terms that he was not tired from walking and that he could walk a long distance, it just took him a while.  He then thanked me for my concern and offered a sweet smile.

The tour lasted just under an hour and moves from one section to another.  I found out along the way that he had been in the air force for two years and had been here many years before inside these tunnels, but some of his speech was unclear.

The tunnels themselves were quite interesting.  We got another history lesson on how and why Great Britain and the Allies entered into the war and how the tunnels were used during Operation Dynamo to rescue troops from Dunkirk. 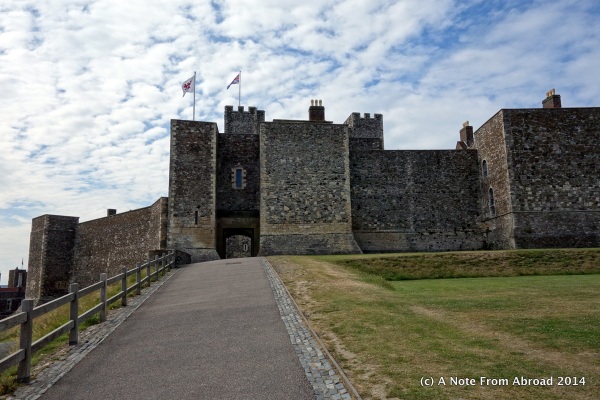 Main part of the castle with high towers

That completed, Tim and I took off on our own now for something to drink and then headed into the main part of the castle to go through numerous rooms and displays.  I especially enjoyed seeing all of the different metals of honor that one can earn while in the British military.  Never having been in the military myself, I am not familiar with the different colored ribbons, the bars, or the emblems hanging from each one, nor do I understand their significance and what it takes to earn one.

One last thing remained, to walk to the top of the Great Tower to take in the views.  It is many, many steep steps up to the top, but I slogged along, stopped to catch my breath a few times and finally made it all the way up.  I was so proud of myself and as I looked around to take it all in, I could not believe me eyes.

Yes, the Old Man stood in front of me!

How he made it all the way up there boggles the mind.  He simply had the will and determination to not only get there all by himself, traveling by bus, walking quite a ways, and then climbing those many steps.  He wanted to see it all – AND HE DID JUST THAT!

The views, especially of the harbor and town way below were lovely. 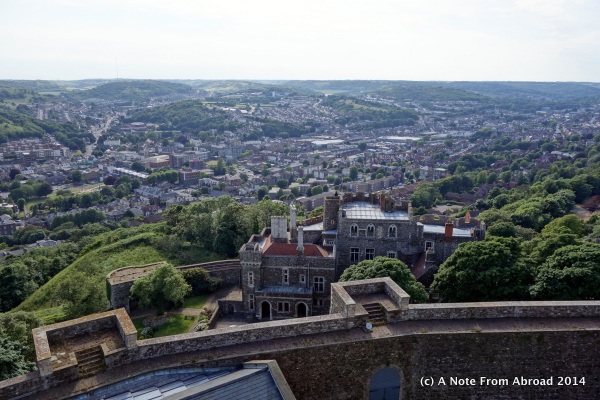 View from the top of the castle

One of several gates that had a drawbridge

Our day was coming to an end, but for a few remaining moments we rode the train around the rest of the grounds and then walked back down the hill to the bus stop.  We waited for about 20 minutes for the next bus to arrive and you can bet I was keeping my eyes open for our Old Friend. He never arrived, so I don’t know if he caught a later bus back toward town, or some kind soul offered him a ride instead. 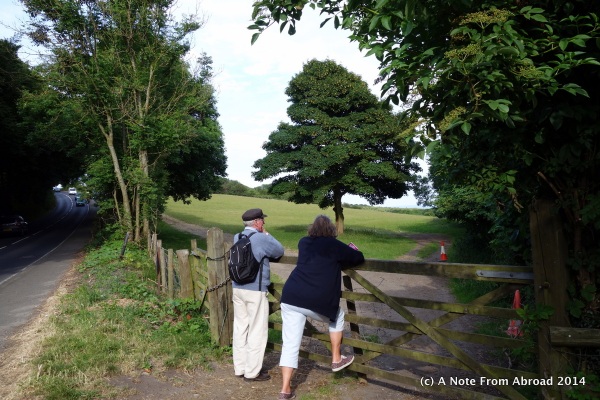 Waiting with us for our bus along a country road.

Gratitude Moment:  Today I am grateful for the wisdom and strength of the generation that came before us.  They show by example that if you are determined enough to accomplish something, that anything is possible.  I have no idea who that old man is, don’t know his name or even where he is from, but for today he is my hero.

Hi and welcome! We are Tim and Joanne Joseph and we have just embarked on our "next chapter". At a stage in life where traveling the world, taking pictures, and sharing our adventures with friends and family will be our dream come true.
View all posts by Tim and Joanne Joseph →
This entry was posted in England, Europe and tagged Dover, Dover Castle, England, Kent, Photography, Travel. Bookmark the permalink.