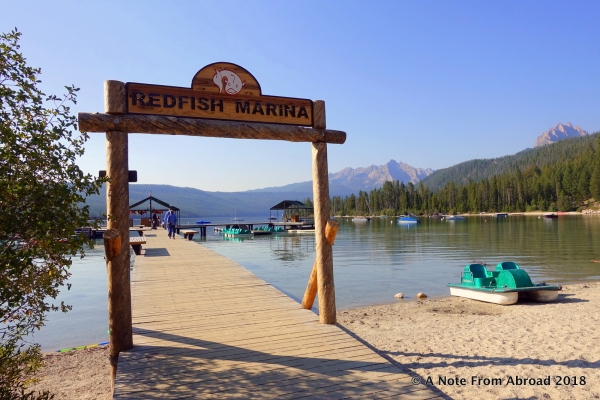 Redfish Lake is located about five miles south of Stanley and smack dab in the middle of the Sawtooth Mountains Recreation Area. 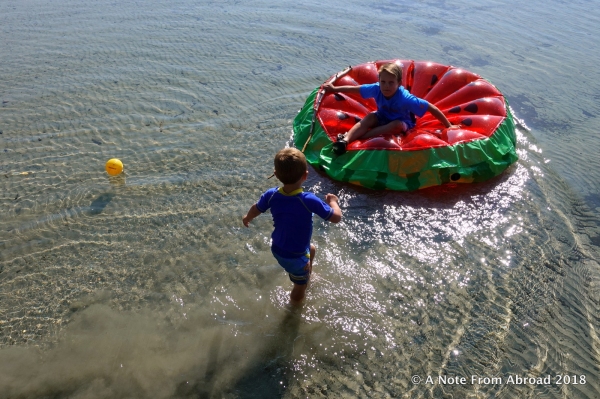 The Lake got its name from the red Sockeye Salmon that used to flourish in these waters.

“It is named for the brilliant sockeye salmon that once returned from the Pacific Ocean in such massive quantities that the lake shimmered red during spawning season. Currently, only a small percentage of the wild sockeye succeed in making through the several hydroelectric dams along their route back to the lake to spawn.” ~ Wikipedia 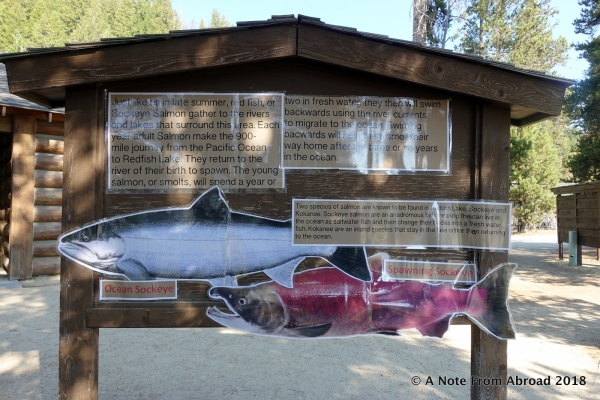 Sockeye Salmon are rare to see in this lake these days

Today the lake area is mostly known for camping, hiking, and water sports. We decided to rent canoes for a half day to explore and get some exercise. 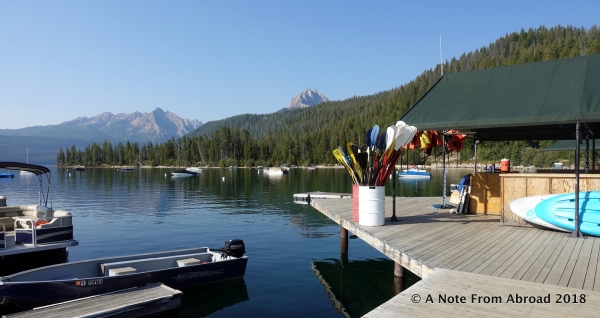 Several kinds of water vessels were available to rent

If one knows what they are doing (and we clearly did not), then the person sitting in the front of the canoe does most of the paddling while the one in the back steers. For some odd reason both Jan and I got seated in the front and the guys behind us. 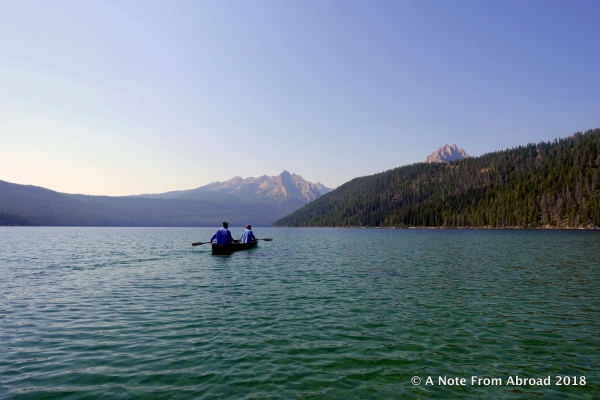 Lovely day on the lake

The lake was relatively smooth save for the occasional waves from a passing boat. We rendezvoused at one point, hooking the two canoes together and shared in a small lunch that Jan had packed. 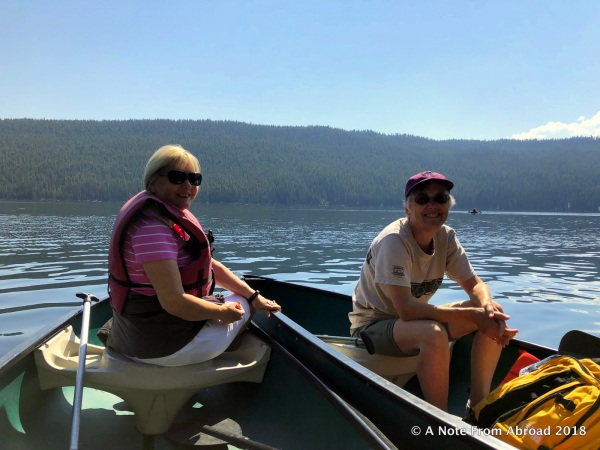 Jan and Mark decided to forge on ahead to see what was around the next (and next) corner and enjoyed a better view of the Sawtooth Mountains. 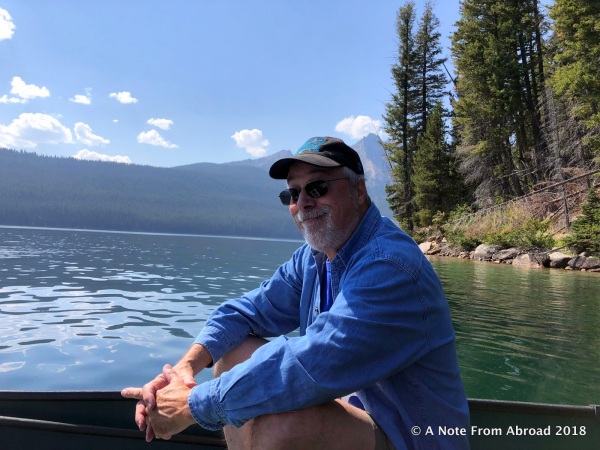 Mark looks like he is up to no good doesn’t he?

Tim and I opted to stick closer to shore and slowly work our way back toward the dock. We enjoyed watching fish in the shallow waters, spotted an enormous osprey overhead, and simply soaked in the sunshine. 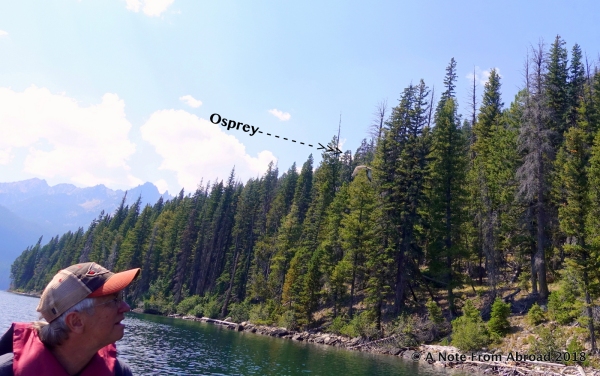 Sadly for Tim, that paddling arrangement did not work out so well. While I calmly and occasionally put an oar in the water, I was surprised that when we returned to shore that his t-shirt was soaked with sweat.

We still had part of the day remaining so decided to drive over to check out Stanley Lake, not far away.

There is a lot of construction currently underway to improve the roads and sites at the lake which limited our access. We were only able to see a morsel from an overlook. 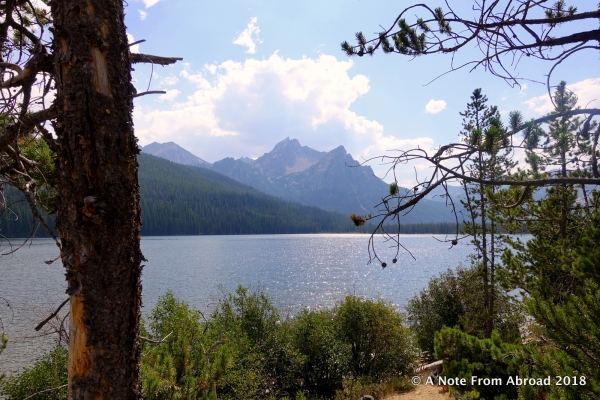 Our campsite at Smiley Creek Lodge for the two nights was simple but certainly adequate. There is a small store and restaurant where we enjoyed a hearty breakfast one morning. They also have a large grassy area with horseshoe pits and corn hole toss game.

The guys got their revenge on our lack of extreme canoe paddling skills and managed to whoop us at both horseshoes and corn hole toss.

Several years ago I was introduced to this game back in the midwest when visiting Tim’s family in Illinois. I’m not sure how widely this is played and would love to hear from others who are familiar with it. 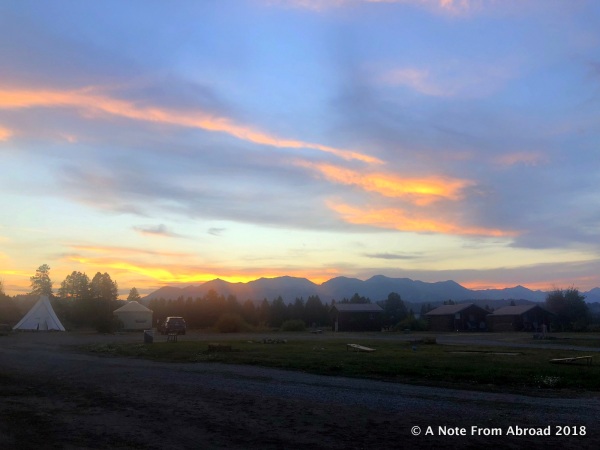 Loosing our light after loosing at horseshoes and corn hole toss

In case you have never played corn hole toss, here are the official rules, not that we adhered to them, mind you *sheepish grin*.

GRATITUDE MOMENT: Today I’m grateful that I don’t have eyes in the back of my head, as I’m quite sure Tim was making faces and unkind gestures behind me as we paddled in tandem. But he is too much of a gentleman to admit it…

Hi and welcome! We are Tim and Joanne Joseph and we have just embarked on our latest adventure. We hope you will join us!
View all posts by Tim and Joanne Joseph →
This entry was posted in Idaho, RV Life, United States and tagged Camping, canoe, corn hole toss, horseshoes, Idaho, Photography, Redfish Lake, Road Trip, RV, RVing, Stanley, Stanley Lake, Travel, trip, vacation. Bookmark the permalink.