Cologne ~ From the Magnificent Cathedral to a Chocolate Factory 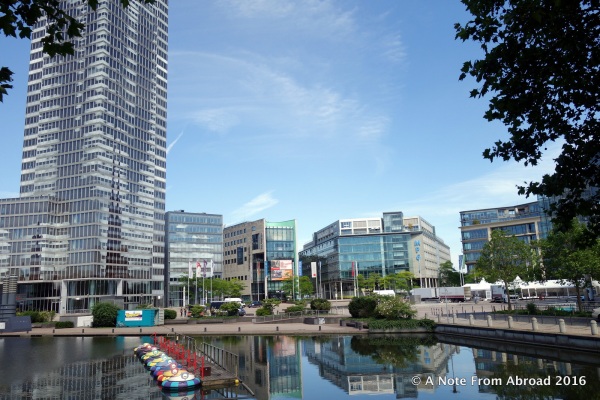 Cologne is a big city metropolis compared to the smaller bergs we have been visiting. It ranks number 4 in size in Germany with a population of around one million inhabitants, behind Berlin, Hamburg and Munich.

At a strategic position and German military base during World War II, it was almost completely destroyed by RAF bombs, and 95% of the city fled. Due to the postwar rebuilding efforts, this city is an amalgamation of restored historic buildings right next door to modern complexes.

We had decided to just wander on our own today, walking from the ship into the heart of the old town center where Cologne Cathedral is located. It being Sunday morning, we had been advised that we would not be able to enter the cathedral until early afternoon. So, in the meantime we purchased tickets for the local hop-on hop-off version of a tour bus and got an overview of the city. Their pick up point was right next to the cathedral.

My shots from the morning just walking around and from the bus:

After our bus sightseeing tour, we decided to see if by chance we could take a look inside the cathedral, and were pleasantly surprised that we could enter during the services. Of course one must be more mindful and discreet taking photos then, but I managed a few, hopefully without being intrusive.

A stunning example of Gothic architecture, the cathedral was named a UNESCO World Heritage site in 1996. It has the largest facade of any church in the world due to the two huge spires. It is the most visited landmark in Germany with over 20,000 people per day.

Construction was started way back in 1248, halted in 1473, restarted in the 19th century and finally completed in its current form and according to the original plans in 1880. Restoration went on between the 1950’s to 2005, but there is some ongoing work being done on the exterior at this time.

Many significant sites in Germany were bombed out, badly damaged or destroyed during World War II. The Cathedral was damaged but survived.

The church is immense inside with room to seat over 20,000 people. We were not able to visit the kings burial chambers due to the service being conducted, but if you are visiting at a better time you might want to check it out.

“Behind the high altar, the Shrine of the Three Kings rises up; the relics of Caspar, Melchior and Balthasar-the city patrons of Cologne-rest here alongside the relics of Saints Felix and Nabor and Saint Gregory of Spoleto. This impressive work of medieval gold craftsmanship surpasses all other shrines in the Western world in terms of size and grandeur.” ~ Cologne.de

Interior of Cologne Cathedral during a service

And a few more exterior shots:

Our day was only half over at this point, so after returning to the ship, enjoying another bountiful lunch, we realized that our ships position was absolutely perfect for us to take  a five-minute walk over to the CHOCOLATE MUSEUM.

The museum is comprised of nine different exhibit areas that trace the history and culture of chocolate. Your journey will take you from the Mayan and Aztec civilization, the Baroque age and all the way to modern production methods. And yes, samples are provided from the largest chocolate fountain I have ever seen.

GRATITUDE MOMENT: Today I am grateful for being able to visit the Cologne Cathedral. Although we did not “attend” the Catholic service, we still got to witness some of the rituals, hear the choir sing, the organ play, and soak up the immensity and grandeur that she embodies.

Hi and welcome! We are Tim and Joanne Joseph and we have just embarked on our "next chapter". At a stage in life where traveling the world, taking pictures, and sharing our adventures with friends and family will be our dream come true.
View all posts by Tim and Joanne Joseph →
This entry was posted in Europe, Germany and tagged Chocolate Factory, Chocolate Museum, Cologne, Cologne Cathedral, Cruise, Dome Cathedral of St Peter, Europe, Germany, Gothic, Kölner Dom, Museum, Photography, Rhine, River, River Queen, Schokoladen, Schokoladenmuseum, Travel, trip, UNESCO, Uniworld, vacation, World Heritage Site. Bookmark the permalink.