View of Koblenz and Rhine River taken from Marksburg Castle

Koblenz, also spelled Coblenz, is located right on the confluence (junction) of the Moselle and Rhine Rivers in the western part of Germany. We had cruised right past this city in the middle of the night several days earlier.

TRIVIA MOMENT: Koblenz is a sister city with Austin, Texas.

This time through we had a chance to explore. But first a tiny bit of history.

This is a very old settlement, dating clear back to 1000 BC, when early fortifications were built on the hill above Koblenz. Even Julius Caesar comes into play, building a bridge here around 55 BC.

It would be ludicrous to try to detail all of the back and forth that took place over the past 2000 years, but suffice it to say this territory has been conquered, traded, battled over, given as prize or via treaty agreement, invaded, and bombed out. Most often she traded hands between the Romans, Franks, French, Germans, Swedes and even the Russians and Prussians, with a few others tossed in for good measure.

The city also marks the northern border of the Rhine Gorge, the section of the Rhine River that was designated as a UNESCO World Heritage Site in 2002.

Our walking tour takes us through the Altstadt (old city), starting off where the two rivers come together. There is a huge monument that presides over the triangular park. As you are facing the water from the statue, the Moselle is on the left and the wider Rhine on the right.

The story behind the statue and monument is interesting. The original equestrian statue of the German Emperor, William I (William the Great), dates back to 1897. The inscription on the base (English translation) reads “Never will the Empire be destroyed, so long as you are united and loyal”.

Thinking this was a base of operations, the area was heavily bombed in 1945 (World War II). The statue was badly damaged and taken down shortly afterwards. By 1949, Germany was divided into two parts, the Federal Republic of Germany and the German Democratic Republic; the capitalist west and the communist east.

The German Corner was later turned into a monument with visions for German unity by then President Heuss. The coats of arms of all the German states were installed and a large German flag was flown over the plaza.

Finally the Berlin Wall came down in 1989 and three slabs of concrete from the actual wall were placed next to the monument.

A section of the Berlin Wall is on display

After the reunification and much debate, a replica of the original sculpture and the statue was created and installed in 1993. The three parts of the Berlin Wall are dedicated to the “victims of the division”. 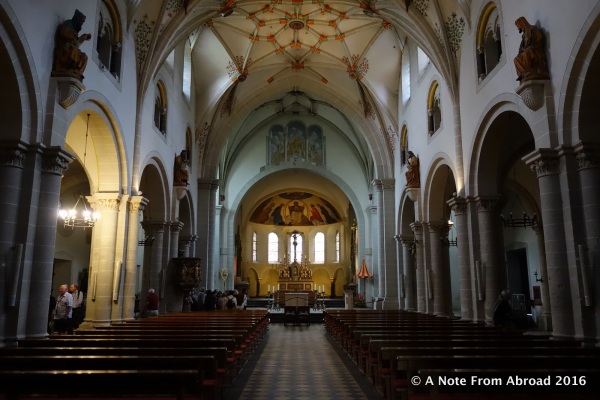 And a few more random shots taken in Old Town

The little guy on this statue also has a story.

He looks pretty innocent, but don’t let him fool you. When you least expect it HE SPITS AT YOU!

He has caught many a tourist by surprise

He has become the symbol of Koblenz and even shows up on the manhole covers in town.

Located in Braubach, a short bus drive from Koblenz, presiding above the Rhine River is the Medieval Marksburg Castle.

As part of the Rhine Gorge UNESCO Site, this is the only one of forty castles along this stretch of the river that was never destroyed. It was used as a defensive or protective structure and not a royal palace.

The views from the top of the castle were stunning.

View from the top of the castle

And the inside of the castle was pretty interesting as well. Gus managed to pop into a couple of photos when no one was looking.

Gus with several of his new best friends

Returning to Koblenz, the cable car carries us high over the Rhine River to get to Ehrenbreitstein Fortress. It too is part of the Rhine Gorge UNESCO sites, sometimes listed as Upper Middle Rhine Valley.

The Koblenz Cable Car ride itself takes you right over the Rhine River and provides scenic views of both Koblenz and the German Corner. I thought that the ride was every bit as interesting as our time at the fortress.

Ehrenbreitstein Fortress sits on the hill across the Rhine from Koblenz

Walking back to the ship, we passed through the park and noticed that a large number of people were playing Pokemon Go. It seems to be EVERYWHERE! 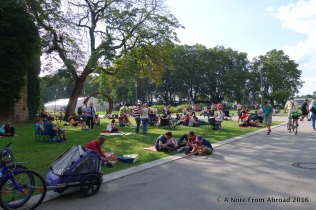 Click here for a short clip that shows how a cruise ship has to carefully negotiate the turn from the Rhine to the Moselle.

GRATITUDE MOMENT: Today I am grateful for the reminders that we have come far in our attempts to unite the world. May we never lose sight of the goal – WORLD PEACE.