One of our worst travel days EVER 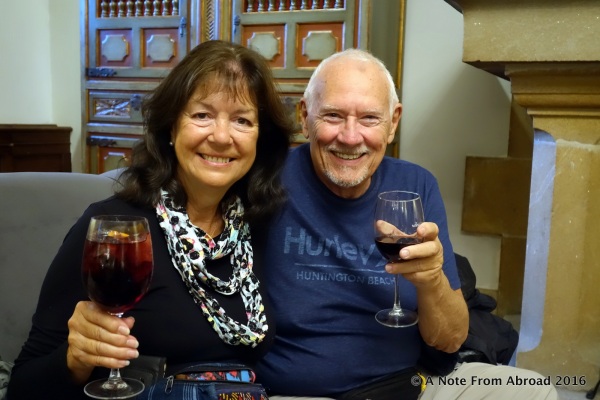 Our Gate 1 tour had come to an end and we still had 10 days left in Europe before our scheduled flight home on June 2nd from Madrid. As some of you may remember, our dear friends, Dick and Karen Theil were in Santiago where Karen had just completed her 500 mile trek across Northern Spain, known as “The Camino” or “Walking the Way”.

We had hoped to be in Santiago to witness her walk into the courtyard in front of the Cathedral and celebrate the moment “live”. But she was just too darn fast and completed the walk several days before we arrived. Better late than never though, we still wanted to head north and offer our personal congratulations on her achieving this amazingly challenging goal.

But first we had to get from Lisbon, Portugal to Santiago, Spain.

Originally I thought it would be easy to just hop on a train and head north, but after some research we discovered that it would take over 24 hours via train. Next we looked into renting a car in Portugal. The rental itself was not that expensive, but the drop off fee to leave it in another country (Spain) was around $900 – GULP!

I was able to book us two seats on Iberia with a connection in Madrid that would get us into Santiago late the same afternoon. It was not cheap, $132 per person plus tax, plus $17 per piece of luggage. But it was only a few hours vs over 24…

In the past our Gate 1 guides have been fabulous at helping us arrange transportation to the airport, but for some reason Andre, did not want to assist, giving Tim the excuse that the Gate 1 insurance would not cover us. That was simply B.S. and we called him on it. Suddenly he was Mister Nice Guy once again, and helped out.

I can honestly say this was the first time we have been disappointed with the service we have gotten from this otherwise fantastic tour company. Perhaps he was just having an “off day”.

Well, our day was about to get a bit more frustrating…

Upon checking in at the airport in Lisbon, we were told by the agent that she did not have a reservation for us and that the flight was oversold. I proceeded to show her my confirmation. She said there was nothing she could do and asked us to get out of line and go to the flight reservation or ground services desk for further assistance.

It was hidden but eventually we found the correct desk. They too said there was nothing they could do to help us, and suggested we call the Iberia Reservations department directly and gave us a business card.

My frustration was mounting…

Tim, ever the cool cucumber, even when I am about to lose it, calmly called the local number. He got an agent who did not speak English, however could explain to him (in perfect English with no accent I might add) that he would need to call back, use the number system (you know the one that says “push 1 for ____, push 2 for ____”) to select English.

Having just gone through their system, Tim was pretty sure that an English option had not been offered, but he politely hung up and tried again. Sure enough there was NO OPTION or English.

By now, I am moving BEYOND frustrated. I know it was not the end of the world, but we were running out of options. We looked at each other and said, OK, now what do we do???

We decided to return to the help desk (with me trying not to cry) and asked them if they could at least help us get someone on the line who would speak English with us. She looked at us like we had two heads (each) and were completely illiterate, but at least did proceed to redial on Tim’s phone, and listened to the recorded message herself.

The strangest expression came across her face as she said, “There is no English option”.

Hmmm, at least is was not just us.

Sooooo, she poked the Portuguese version, spoke on our behalf, and within about two minutes she told us to return to the ticket counter (the priority line) and that we now had our reservations and could check in!

OK then. Off we went.

The priority line was backed up checking in a large group, so we were directed to the line next to it where a sweet young lady could not find our reservations. We explained to her the long story. She called over her supervisor.

Eventually she found a record and went to print the boarding passes for us. I am relieved, thinking we are about to be on our way. Nope, she looks at them and tears them up.

After repeating this and ripping up five sets of boarding passes, she remarks, something about us still needing to pay for our luggage. I came so close to loosing it, but no, held it together and advised her that we had paid $17 each for two pieces of luggage and was about to pull out my confirmation once again showing where we had paid.

She must have realized that by now I was on the edge, she simply said, “OK, sometimes we just need to fix things”. Printed more boarding passes, checked our luggage and off we went toward passport control and security.

It had taken us two hours to get to this point. I was so thankful that we had allowed extra time. It was only 11:30 in the morning and I wanted a stiff drink 🙂

The flights themselves went smoothly and we arrived in Santiago just after 5:00 pm, jumped in a taxi and soon were greeted by Dick and Karen at the cute little boutique hotel they had chosen for the night.

Yep, “for the night”. We had planned on spending two nights here, but they were sold out for the second night. Soooooo, Karen and I spent the next couple hours going door to door in search of a place in the center of the old quarter, near the cathedral that could accommodate us for the second night.

Twice we were told a place had rooms, and by the time we got there, they were not available.

I was starting to think someone had put a travel hex on us this day when we were finally told about two rooms nearby, but we would have to go to a different hotel to book it. OK, that was odd, but by now, I would have settled for a broom closet with a blanket and a bucket for a toilet in the corner.

Success! The last two rooms were grabbed up by us, we returned to find the guys relaxing after they had rewired the hotels WiFi system and we went out to eat dinner. Or I should revamp this to read that we had dinner after enjoying a LARGE glass of the best sangria I have ever had at a five-star hotel (Parador Hostal Dos Reis Catolicos) that faces the square where the main cathedral is located.

Having a celebratory drink together at the Parador

That night as we crawled into our twin beds, we noticed a discrepancy in the length of the mattress. I was all tucked into the bed closest to the door, when Tim mentioned that his feet were hanging off the end. 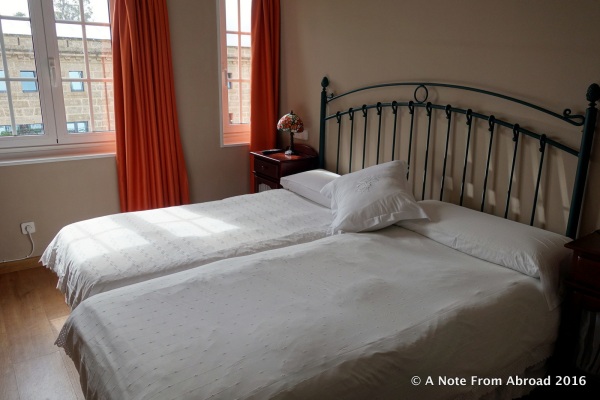 Notice one bed is longer than the other?

So of course I switched with him since I am almost a full foot shorter than he is. I ended up getting the better firm mattress though and swiftly fell into a deep sleep.

GRATITUDE MOMENT: Today I am simply grateful that the day is over, that we arrived safely, were able to meet up with our dear friends, found a place to sleep, and that the Parador serves sangria in HUGE glasses. I’m also grateful that my hubby is always calm, cool and collected no matter what is happening around us. Someday I think I may need to check his pulse…

In all seriousness, I do realize that with all the turmoil that is going on in the world, that the small setbacks and trials we experienced this day were nothing to get too worked up about.

Hi and welcome! We are Tim and Joanne Joseph and we have just embarked on our "next chapter". At a stage in life where traveling the world, taking pictures, and sharing our adventures with friends and family will be our dream come true.
View all posts by Tim and Joanne Joseph →
This entry was posted in Europe, Portugal, Spain and tagged 500 Miles, Airlines, Camino, Europe, Iberia, Photography, Portugal, Sangria, Santiago, Santiago de Compostela, Spain, The Way, Travel, Travel frustrations, Trek, trip, vacation. Bookmark the permalink.

26 Responses to One of our worst travel days EVER