20 Things I learned about Turkey and a Wrap-up

Harbor near the city of Troy in Canakkale just before sunset

Turkey is a land where many cultures have dominated, been overthrown, conquered, and deported.  It sits on the ancient Silk Road at the crossroad between East and West.

The amount of information gained and the variety of experiences on a trip like this is mind-boggling.

Just some of the highlights included visiting ruins that date back 3500 years, seeing naturally eroded rock formations that look like they belong on another planet, walking along the Aegean Sea at sunset, wading in travertine pools on the side of a cliff filled by natural hot springs, viewing frescos from the 10-12 century that are still vibrantly colored, seeing the glory that was Ephesus, being entranced by Whirling Dervishes, going up in a hot air balloon before dawn to float over fairy chimneys, entering an underground city built to house 60,000 people for three months, and exploring the sights of Istanbul including the Blue Mosque, Hagia Sophia, Grand Bazaar, Basilica Cistern, Spice Market, and walking on the Galata Bridge.

We also learned about the political history, religion, education, medical and monetary systems in Turkey.

Here are some of the interesting bits and pieces of information I learned on this trip:

1.  The Turkish people are superstitious.  In fact it is common throughout several countries in this area for people to fear the “evil eye”.  To protect themselves, they display a blue circular medallion or picture everywhere including in their business, home, and car.

2.  Turkey is located on two continents, Europe and Asia.  The city of Istanbul has the old section on the Europe side.  Then by crossing the Bosphorus Bridge you enter Asia where the largest part and financial hub of Istanbul is located.  The majority of Turkey is on the Asian continent, yet we classify Turkey as European.  It is also on the edge of the Middle East which results in a blend of many cultures.

3.  The primary religion in Turkey is Muslim.  In fact 99.6% of the population is Muslim. Once home to a large Christian population, there are groups that take religious pilgrimages here to trace people and places named in the Bible.  Some of these include the Seven Churches of Revelations and Mt. Ararat (where Noah’s Ark is said to have landed). Another interesting bit of information is that 60% of the places mentioned in the Bible are located in Turkey!

4.  The national drink is Raki.  A very potent liquor that has a slight licorice taste to it.

5.  Small dishes call Mezes are served in many Turkish restaurants.  They are the Turkish equivalent to Spain’s Tapas.

6.  Yoghurt is another food staple here and is often served with fruit, honey and/or nuts.  It is also mixed with fresh herbs, cucumbers, or other ingredients and used as a topping or side dish.

9.  The Turks did not have any last names until the 1920’s when the new president, Ataturk, made it mandatory for each citizen to choose a surname.   The president was given the name Ataturk (father of Turkey).  The name Ataturk can not be chosen for anyone else.

10.  The rock formations in Cappadocia are called hoodoos or fairy chimneys.

11.  Turkey is slightly larger than the state of Texas.

13.  There are a lot of cats in Turkey.  At every stop we made or place we toured we were greeted by numerous cats.  They seemed to be well cared for and well fed.  We also saw quite a few dogs, but the cats outnumbered them.  The street dogs were often seen with a plastic chip hooked in their ear about the size of a quarter.  This was how the local government could mark dogs without collars as having been vaccinated.

There were a lot of cats in Turkey

14.  Turkey is known for severe earthquakes.

15.  Their government is considered a republican parliamentary democracy.  They have both an elected President and a Prime Minister.

16.  There are 10 UNESCO sites in Turkey and we visited four of them on this trip:  the ancient section of Istanbul that includes the Blue Mosque and Hagia Sophia, Goreme Park and natural rock formations of Cappadocia, the ancient city of Troy, and Hieropolis-Pammukale.  Another site that has been nominated but not yet named as a World Heritage Site and in my humble opinion should be included are the ruins at Ephesus. 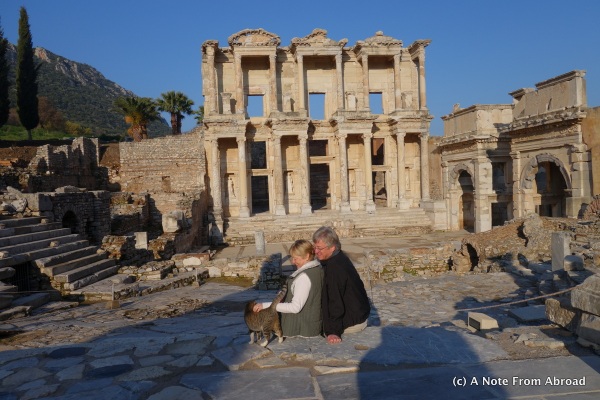 17.  The Whirling Dervishes are a religious order.  I had mistakenly called their twirling a form of dance, but it is instead an almost trance-like state and part of a religious ceremony.  With one hand lifted toward God and the other hand pointed down to connect themselves and their congregation with the Devine.  As the earth circles the sun, electrons and protons circle in atoms, the Semazen equate twirling (revolving) as part of a mystical journey to find truth and perfection.  There are seven advices of the Mevlana:

18.  A Visa is required for US citizens to visit Turkey, but it can be easily paid for and downloaded on the internet for $20.00

19.  Turkey introduced coffee to Europe and the tulip to the Dutch.  Writing was first used in Anatolia.

20.  Turkish traditions says that a stranger at one’s doorstep is considered “God’s guest” for at least three days.  I’m not sure if our trip was designed around this premise or not, and I somehow doubt that staying in a hotel counts, but we never stayed beyond our allotted three days anywhere and were treated with warmth and kindness.

We chose the Gate 1 Travel tour package for several reasons – they offer a great value for the money, they know the area and can allow you to cover the major attractions and highlights in a well organized and shorter period of time, they hire well educated tour guides and professional safe drivers.

Also this trip had been highly recommended by other friends of ours that had already taken it and we had been very satisfied with two other Gate 1 tours we had previously taken to Thailand and to the Balken countries of Bulgaria, Serbia and Romania.

New features this trip – WiFi on the bus and Whisper headsets so you can easily hear your tour guide even in crowded areas.

Hi and welcome! We are Tim and Joanne Joseph and we have just embarked on our latest adventure. We hope you will join us!
View all posts by Tim and Joanne Joseph →
This entry was posted in Asia, Europe, Photography, Reflection, Turkey and tagged 20 things I learned, Evil eye, Gate 1, History, Interesting facts, Travel, Turkey, wrap-up. Bookmark the permalink.