Our tour was starting to come unraveled at the seams. A game drive scheduled for the previous afternoon at Mutirikwi National Park was cancelled. Evidently the company that was supposed to take us on the safari had mechanical problems with their vehicle(s) and there was no back-up plan.

Our overnight at the Hippo Creek Lodge was frankly a disappointment. The rooms themselves held possibilities if they had been clean and updated. The “bones” were good, with a large roomy sleeping area and huge bathroom. The tile designs embedded into the flooring could have been special. 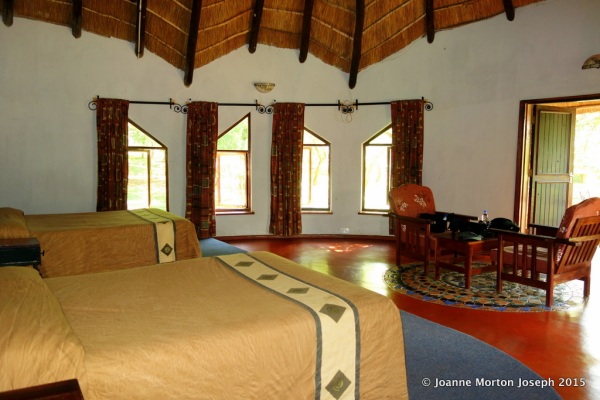 Sadly, I think that the lodge has been neglected and is in bad need of a facelift, including new linens and housekeeping. There is definitely potential here, but they have some work to do. I am sad to say this, but it was just dirty. I hope that they get this resolved because there is a lot of potential here.

Our first stop of the day was to be a visit to a neighborhood school. Several members of our group had brought along gifts for the children as well as school supplies. Much to our surprise, we were turned away at the gate and not allowed to enter the school property.

The principal came out to our bus, but would not budge. Evidently there had been a goof up on communications, and our visit had either not been arranged, approved, or confirmed.

Soccer balls, supplies and gifts were left with her and we drove off, disappointed.

But we still had one of the billed highlights to see, so off we went to explore the Great Zimbabwe, a World Heritage Site.

There are multiple ruins through out the country, known as a Zimbabwe. This is the largest, and therefore became known as the “Great Zimbabwe”. In fact, this is the largest set of ruins south of the Sahara and the second oldest after nearby Mapungubwe in South Africa.

To this day, there is an element of mystery surrounding the history. Sadly, the earlier white settlers, claimed that this was too advanced architecture, and could not possibly have been built by black Africans.

“During the 1960’s and 1970’s, archeologists faced censorship and were restricted in mentioning that the Great Zimbabwe was the product of black people….A few decades later, the black nationalist movements opposing the white regime pointed to the ruins as evidence that, hundreds of years earlier, Africans had run their own complex societies.

To them, Great Zimbabwe was a reminder of past glories and a symbol of a coming rebirth.

Both nationalist movements took their names from Great Zimbabwe and eventually adopted Zimbabwe as the name of their new country. Images of the green soapstone bird carvings found on the Acropolis now appear on Zimbabwe’s flag, coat of arms and money.” ~ Greatzimbabweruins.com

The site was proclaimed a National Monument in 1937, gave its name to the country in 1980, and became a World Heritage Site in 1986.

I was so surprised that our small group of 20 were the ONLY visitors there. For this to be a National Monument and a UNESCO Site, it is sadly deserted.

There are three main sections to this monument: The Hill Complex, The Great Enclosure, and The Valley Complex. Covering an area of 1780 acres, no mortar was used in the construction. It dates back to the 11th – 15th century and at its height, 18,000 to 20,000 people lived inside its wall, depending upon which article you read.

Upon our arrival we visited the on-site museum (no photos allowed) before taking the hike up to the Hill Complex. The museum was just OK in my humble opinion. I am overly tired and fighting a nagging headache today though so perhaps I did not give it the attention it deserved.

There are two routes to the top. Many of the youngsters took the more direct and steeper route, but several of us chose to take the slightly longer and easier side path. It still meant a bit of a climb, but taking my time, I had no trouble making it to the top.

Path up to the top of the Hill Complex 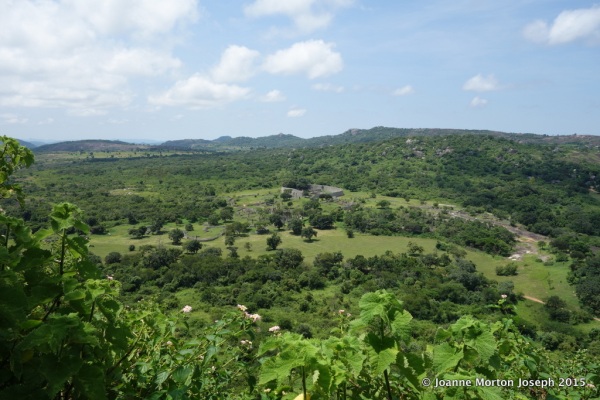 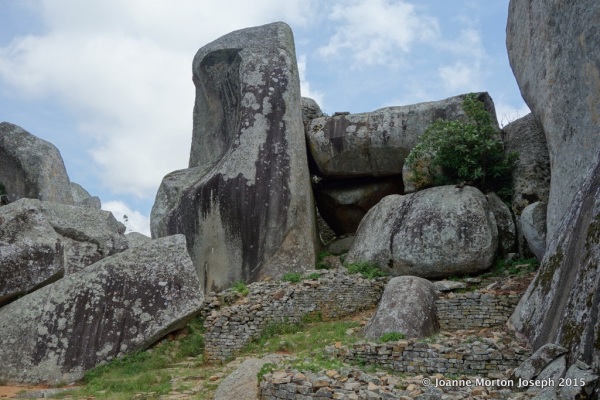 On top of the Hill Complex

Tim and I chose to take a break and did not join the group on their hike to the Valley Complex, but after a short time we once again met up with them to explore the Great Enclosure.

The Great Enclosure – I found this section quite remarkable, with the complexity of construction and no mortar used in the walls. Walking into the enclosure between two massive walls, I was immediately struck by a flow of cool air, a welcome respite from the hot afternoon sun. It felt like an air conditioning unit was softly coming through the small openings between rocks.

It was not, of course, but what a pleasant surprise! 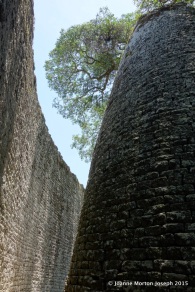 This massive stone cone was what I most associated with the Great Zimbabwe:

The walls had crumbled in many areas, but it was surprisingly still very impressive to see.

A picnic lunch was provided to us courtesy of Hippo Creek Lodge and Brian’s tour company, and we enjoyed a welcome chance to cool down before loading back on our bus.

And what about more shopping?

We did manage to get a couple of quick stops in, including roadside venders, and a small shopping complex.

The decision had been made two days earlier to make another very late change in our itinerary. It turned out that we would have needed to leave Hippo Creek Lodge extremely early the following morning in order to get a few people to the airport in time for their flight back to the USA.

We loaded back on our bus and headed for Harare, about four hours away, late that afternoon. To give Brian a break here, the hotel in Harare was not very good, but it was a very last-minute change and add-on.

All of a sudden the Hippo Creek Lodge was looking pretty good!

Our Harare hotel’s elevator was broken and being used as a janitors storage room, complete with mop and buckets.  We had to walk up four flights of stairs with our luggage. Once again I was grateful we travel light! 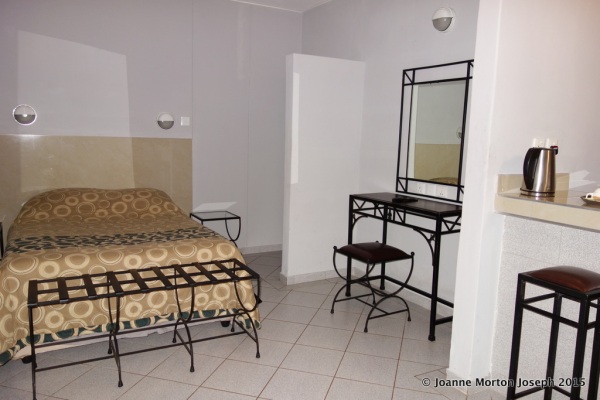 The next morning at breakfast, we were asked to pay for our hotel room. We politely let the manager know that it was already paid for as part of our tour, and that breakfast was to be included.

He then informed us that no, Brian had not paid our bill.

I’m guessing that with all the last-minute changes, it had not been prepaid as our other arrangements had been and that Brian had planned on paying with his credit card. Much to his and our surprise – they do NOT take credit cards.

Hmmmm, not a great situation to be in.

Thankfully, we still had some cash left on us and after a brief discussion between Tim and Brian, my sweet hubby covered the bill for the group. It would have been a nightmare for everyone to scramble to come up with money for a hotel and breakfast that they had not budgeted for.

Our friend Ben, took our young tour guide, Brian, aside and suggested to him that he utilize his tip money to repay Tim for the hotel rooms, which he did and everything was cleared up before we got on our airplane out of Zimbabwe back to the USA.

Another trip had come to an end…

UPDATE March 3, 2015: As is sometimes the case, my blog posts are written a few days after the fact. In this case, I have delayed publishing my final post for several weeks after returning home. We had some amazing times on the second half of our trip that was booked through Msuna Safaris and Travel. There were also a few snags along the way. Brian is a delightful young man, and I believe that in time he has the potential to not only be an ambassador to his home county of Zimbabwe, but to also grow into a good tour leader. I was sad to learn that since our return, he has cancelled two future tour groups with little to no warning.

Gratitude Moment: Today I am grateful for researchers that persist and continue to try to get to the bottom of the story to find the truth.

Hi and welcome! We are Tim and Joanne Joseph and we have just embarked on our latest adventure. We hope you will join us!
View all posts by Tim and Joanne Joseph →
This entry was posted in Africa, Zimbabwe and tagged Africa, Great Zimbabwe, Harare, Hippo Creek Lodge, Msuna Safaris, N1 Hotel, Photography, Travel, UNESCO, Zimbabwe. Bookmark the permalink.

14 Responses to The Great Zimbabwe