Tim on the Johnston Canyon hike

When we were staying in the campground right next to the town of Banff, I had wanted to do the Johnston Canyon Hike, but just could not get my patootie out the door. But now, I was feeling guilty at missing one of the most popular hiking trails in Banff National Park.

That could only mean one thing – BACKTRACKING!

Thankfully it was only a very short distance from our new site near Lake Louise, so really not a big deal.

Only .5 Mile to Lower Falls and 1.5 to Upper Falls

It was easy to see why this hike is on everyone’s list. The first part to the lower falls takes only 30 minutes, travels along a boardwalk and is rated easy. The engineering task of embedding metal into the side of the rock walls, and installing a cantilevered catwalk is impressive.

Word of warning – get there early to avoid the crowds and to get a parking space.

Many thousand boots have passed over this rock and polished it until it shined.

Rock polished by many pairs of boots over the years

Lower Falls – notice the tunnel opening on the far right side

On the right-hand side of this picture you can see a tunnel opening. It is narrow, but opens  up to a closer observation deck where you just might get some cool spray on your face.

Continuing up the trail toward the Upper Falls, there is a little more climb involved, but still not a difficult walk. The walkway is a simple dirt path in areas, interspersed with more of the reinforced boardwalk.

More waterfalls dotted our path. I think there were seven in all. Upper Falls was worth the climb.

Canada, as does the USA, has a dark relationship with imprisoning enemy aliens. During World War I, some 8500 people from countries who were at war with Canada were put into internment camps. Despite them being civilians, many were sent to prisoner of war camps and used as forced labor.

“Of particular note was the use of forced labour in Canada’s national parks, where they were introduced there as a matter of policy to improve existing facilities and increase accessibility by developing the park system’s infrastructure. By 1915 several internment camps in and around the Rocky Mountains were in full swing, including a camp at the foot of Castle Mountain, the terminal point of the then uncompleted Banff-Laggan (Lake Louise) road.” ~ Wikipedia

Today a monument marks where the camp was located

From Bow Summit, you can take a short walk to see some pretty impressive views of Peyto Lake (pronounced PEE-toh).

During the summer, there is an abundance of glacier rock flour, which gives this lake (and many other glacier fed lakes through out this region) its’ incredible turquoise color. 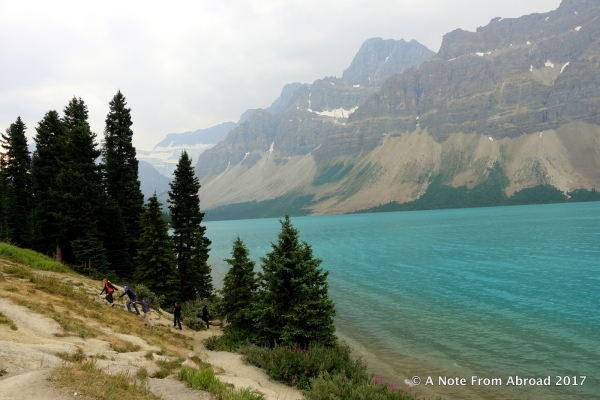 Located along the Icefields Parkway, Bridal Veil Falls is a class 4 waterfall with a drop of 1200 feet. The falls are visible from the pull-out, but even with threatening skies, we hiked a bit down the trail in hopes of getting a better shot.

Falls are visible from the pull-out

GRATITUDE MOMENT: Today I am grateful that we were willing to backtrack and did not miss taking the hike in Johnston Canyon.

Hi and welcome! We are Tim and Joanne Joseph and we have just embarked on our latest adventure. We hope you will join us!
View all posts by Tim and Joanne Joseph →
This entry was posted in Canada, Photography, RV Life and tagged Alberta, Banff National Park, Bridal Veil Falls, Canada, Castle Mountain Internment Camp, Johnston Canyon, Peyto Lake, Photography, Road Trip, RVing, Travel, trip, vacation. Bookmark the permalink.