Did you know that Amsterdam is a conurbation? Well, I learned one more term today. In case you too need a little help with that one, it means that she is:

“…a region comprising a number of cities, large towns, and other urban areas that, through population growth and physical expansion, have merged to form one continuous urban and industrially developed area.” ~ Wikipedia

I guess that makes Amsterdam similar to Los Angeles in that regard. With almost 2.5 million people in the greater metropolitan area, she is the capital of the Kingdom of the Netherlands, but not the seat of the government which is in The Hague.

Just a year ago we spent several days here in Amsterdam as the kick off point for a Gate 1 Tour that took us through Belgium and terminated in Paris. In case you are curious to read more about Amsterdam, including our visit to the Rijksmuseum, The Anne Frank house, or other escapades, you can click here for a list of previous posts from The Netherlands.

But back to THIS trip in the “Venice of the North”. 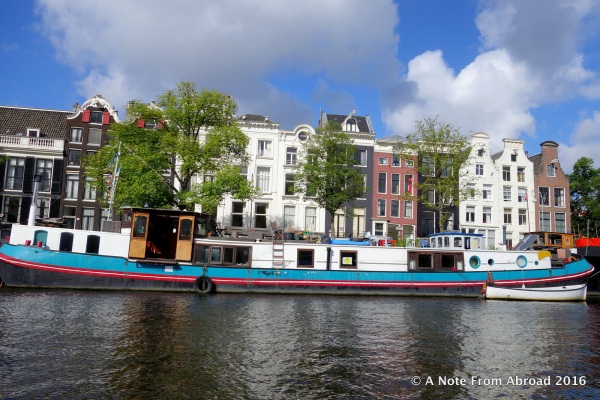 On the canal cruise through Amsterdam, I think in the Jordaan area

It seems to be obligatory for any tour to include a cruise through the canals of the city and of course this was no exception. There are three main canals here dug in the 17th century, that form concentric circles around the city, known as the Grachtengordel. This area is comprised of 90 islands, 1500 bridges and over 100 km (62 miles) of canals.

We are not at a loss of things to look at, as there are in the neighborhood of 1550 monumental buildings alongside the main canals. In 2010 the area was placed on the UNESCO World Heritage list.

We had a choice between touring through the Rijksmuseum or the Van Gogh Museum. We had visited both last year, but being a huge Van Gogh fan, and they had a new exhibit relating to his mental illness, I voted accordingly, although I think that perhaps there is a lot more to see in the Rijks. Also FYI, photography is allowed inside the Rijksmuseum but not inside the Van Gogh.

The two museums are situated almost side by side, so we ended up walking through a passageway at the Rijksmuseum before continuing on to the Van Gogh Museum. My pictures below were taken of posters inside the gift shop and/or corridor.

Situated within a stones throw of each other

Between the two is a large park that houses the famous I Amsterdam sign. Tourists from all over the world jockey to get their pictures taken beside or on top of this monumental piece of art. 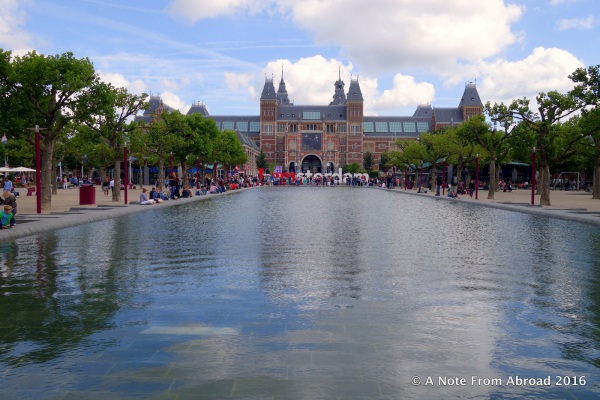 Hey, someone had to take the picture, RIGHT?

Children were both entertained and entertaining while chasing enormous bubbles. One could not help but smile at their ongoing efforts.

After our museum tours concluded, our groups recombined and we climbed on our awaiting busses and headed out-of-town.

Can not escape Pokemon Go…

Now this makes me think that we are in Holland 🙂

First windmill of the day

Next stop was at a shop where we were shown a small-scale cheese production. I don’t know that I gained any new tidbits of wisdom about how cheese is made, but I did enjoy the samples.

Learning how cheese is made

This farm was different in others we had visited, as we were also allowed to visit the barnyard and interact with the cows.

Continuing through the countryside, we learned more about the dams of the Netherlands. Most of my generation are familiar with the Hans Brinker and the Silver Skates story which includes the tale of a heroic Dutch boy who saves his country by putting his finger in a leaking dike. So of course we had a photo stop at a modern-day earth dike which shows how the water level is well above the level of the countryside and the roads we were driving on. 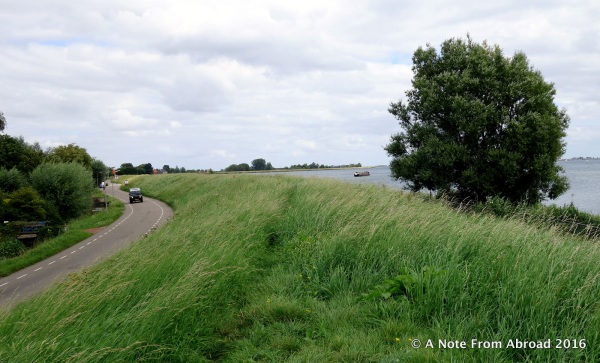 The countryside was lovely as we proceeded further out-of-town. Many fields were home to grazing cattle and sheep.

Lush, green and flat countryside – through the bus front window 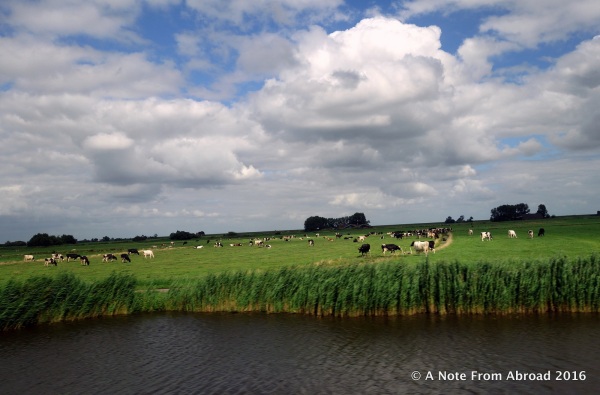 Cattle or sheep cover many of the fields

Finally our bus arrives at our highlighted tour destination, Zaanse Schans in Zaandam. This neighborhood was created between 1961 and 1974 when well-preserved buildings, houses and windmills from all over the region were transported to this one spot.

Now a major tourist attraction, it is divided into sections which include the windmills, a small neighborhood of traditional homes, agricultural zones, as well as several museums, most notable being the Zaans Museum.

The windmill area was a big draw and we headed that direction first. We went inside one called The Cat where a gentleman told stories of its history. De Kat is the only remaining working windmill in the world which grinds raw pigments like chalk for paint colors.

We also climbed up a rather steep set of stairs to the roof where we could take in a lovely panoramic view of the other windmills.

The town section was like visiting a storybook land. Cozy cottages, some with elaborate facades, tailored yards, floral beds, decorative bridges, and adjoining pastures with sheep contentedly grazing along a slow-moving creek.

What an idyllic setting to create a fairy tale

But sadly, our excursion as well as our cruise was coming to an end. After another fabulous dinner, complete with a luscious dessert, it was time to pack up our baggage and our memories.

Yep, it was THAT good!

GRATITUDE MOMENT: Today I am grateful for the care and exceptional quality that constitutes a Uniworld Cruise. We have been well fed (now that is an understatement), pampered, and educated. We have walked, relaxed, explored and enjoyed fellowship with friends. Many photos were taken, sites visited, wine enjoyed, and plans discussed for where and when we can take another river cruise.

A most sincere thank you for all who have taken the time to cruise the Rhine and Moselle rivers right along with us. Your comments and feedback are much appreciated!

Hi and welcome! We are Tim and Joanne Joseph and we have just embarked on our "next chapter". At a stage in life where traveling the world, taking pictures, and sharing our adventures with friends and family will be our dream come true.
View all posts by Tim and Joanne Joseph →
This entry was posted in Europe, The Netherlands and tagged Amsterdam, Canal, Cruise, Europe, Grachtengordel, Holiday, I Amsterdam, Museum, Photography, Rijksmuseum, River Cruise, River Queen, Sign, The Netherlands, Travel, trip, UNESCO, Uniworld, vacation, Van Gogh, Windmills, Zaanse Schans. Bookmark the permalink.

Leave a Reply to Tim and Joanne Joseph Cancel reply