Trier, Germany ~ Two Churches Being Connected Was Most Unusual

Posted on September 9, 2016 by Tim and Joanne Joseph

Along the Moselle River

The ship had overnighted in Trier, so first thing this morning we headed out for a walking tour of the town. Once again the skies had opened up and we had a wet greeting, but umbrella in hand, we were not to be deterred this time.

Originally settled by the Celts in the 4th century BC, then the Romans late in the 1st century BC, making Trier probably the oldest city in Germany. Becoming the favored residence of several Roman emperors, she earned the nickname “Second Rome”.

“Nowhere else in Germany is the evidence of Roman times as vivid as it is in Trier” ~ GoGermany.about.com

Trier is home to several UNESCO World Heritage sites which are lumped together as Roman ruins. The cornerstone being the Black Gate (Porta Nigra), which is where our walking tour started. This is the largest Roman city gate north of the Alps.

Not surprising, it is named because of the dark coloring of the massive stones. The structure is over 1700 years old and the only one of the four originals still standing.

Palace of Trier aka Kurfurstliches Palais

Another part of the UNESCO site includes the Basilica of Constantine, also called Aula Palatina, built by the Emperor Constantine back in the 4th century. Today it is used as the Church of the Redeemer. The Aula Palatina was built around AD 310 as a part of the palace complex.

The Basilica of Constantine

More recent history includes being heavily bombed during WWII where much of the city was damaged or destroyed. Over 60,000 British prisoners of war (captured in Northern France and Dunkirk) passed through Trier en route to German prisoner-of-war camps.

Cathedral of St. Peter and Church of Our Lady in Trier – both UNESCO sites

One of the more bizarre experiences on this trip, was to enter one church and exit from a different church. 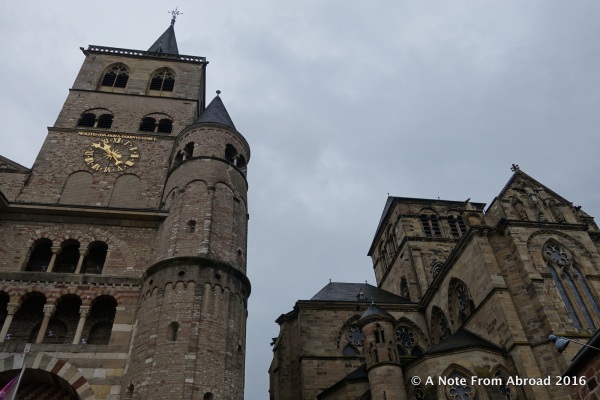 Two churches side by side St. Peter’s Cathedral (left) and Church of our Lady (right)

First we entered St. Peter’s Cathedral (Trier Dom). Heavily damaged during the war, the Cathedral of Trier was reopened in 1974 and in 1984, they celebrated their 2,000th anniversary.

Then walking through the passageway, we entered Church of our Lady (Liebfrauenkirche).

This is the little passageway that connects them

The Church of our Lady is shaped almost round which is unusual.

“…whose cross-shaped vaulting with four corresponding portals in rounded niches is completed by eight rounded altar niches so that the floor plan resembles a twelve-petaled rose, a symbol of the Virgin Mary, the rosa mystica, and reminiscent of the twelve tribes of Israel and the Twelve Apostles.” ~ Wikipedia 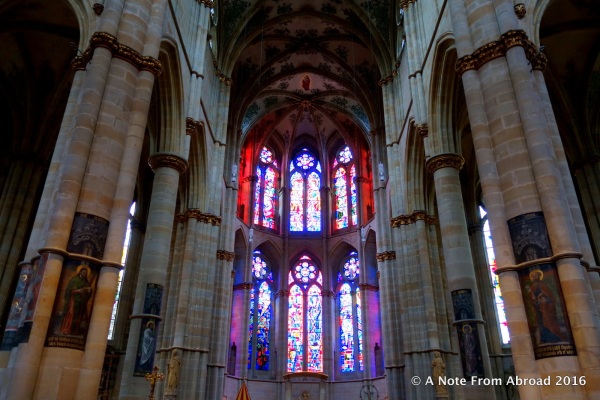 Church of our Lady

And then finally exiting through this gorgeously detailed door:

Door of Church of our Lady

Spotted this in a shop window, but have no idea what it is or how it is used. Any ideas???

Can anyone tell me what this pillow device is?

Back on board for an afternoon of cruising. The weather was still unpleasant, but breaks allowed us to be up on deck periodically to get more familiar with sights along the Moselle River.

Cruising along the Moselle River

Took a quick peak inside the wheelhouse

In the middle of the afternoon we were treated to a delicious spread of tea sandwiches, cakes and chocolate delights including a chocolate fountain with a variety of fruits to dip. 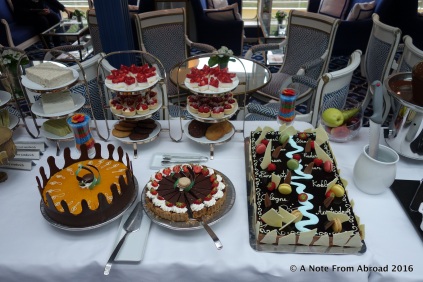 GRATITUDE MOMENT: Today I am grateful for an abundance of chocolate. Bet I won’t get many who would disagree with that!

Hi and welcome! We are Tim and Joanne Joseph and we have just embarked on our "next chapter". At a stage in life where traveling the world, taking pictures, and sharing our adventures with friends and family will be our dream come true.
View all posts by Tim and Joanne Joseph →
This entry was posted in Europe, Germany and tagged Aula Palatina, Basilica of Constantine, Black Gate, Church of our Lady, Cruise, Germany, Kurfurstliches Palais, Liebfrauenkirche, Photography, Porta Nigra, River Cruise, River Queen, St. Peter's Cathedral, Travel, Trier, Trier Dom, trip, UNESCO, Uniworld, vacation. Bookmark the permalink.

26 Responses to Trier, Germany ~ Two Churches Being Connected Was Most Unusual