LUXEMBOURG ~ What I Took Away From Visiting This Tiny Nation

Posted on September 4, 2016 by Tim and Joanne Joseph

Our morning was spent cruising along the Moselle River. Some enjoyed spa treatments or attended a mid-morning demonstration on how to make Apple Strudel put on by our Pastry Chef Alex and Executive Chef Ioan.

Tim and I chose to relax, visit with some of our fellow passengers, enjoy the passing scenery and had an early lunch.

Arriving in Trier, Germany just before 1:00, we readied ourselves for our afternoon tour that would take us into Luxembourg. This was my first time to this country and I was excited to see the highlights.

Luxembourg, officially the Grand Duchy of Luxembourg, is a small country. In fact it is one of the smallest countries in Europe. It is ranked 179th out of all the 194 independent countries in the world. Being landlocked, they have no navy, no air force and a pitifully small army of around 800.

Tiny Luxembourg shown on a map of Western Europe

The country is surrounded with Germany to the east, France to the south and Belgium to the west. From top to bottom Luxembourg is about 51 miles (82 km) long and only 35 miles (57 km) wide.

And being small, you would be right to assume that the country has been bounced around several times over the year being incorporated into France, Belgium, the Netherland, Prussia and Germany.

In 1839, the First Treaty of London, established Luxembourg’s full independence. Sadly this did not end the ping-pong of both France and Germany vying for control or use of their railroad rights.

After the outbreak of WWII in 1940, Germany invaded Luxembourg. With their government in exile in London, they supported the allies, sending a small group of volunteers to participate in the Normandy landing. The city of Luxembourg served as headquarters for Gen. George S. Patton’s U.S. Third Army.

They were formally liberated in September 1944. 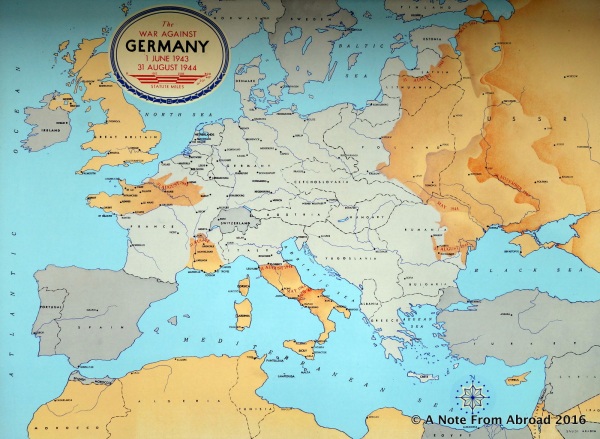 Map of war against Germany

This introduction brings us to our first stop on the outskirts of Luxembourg City: 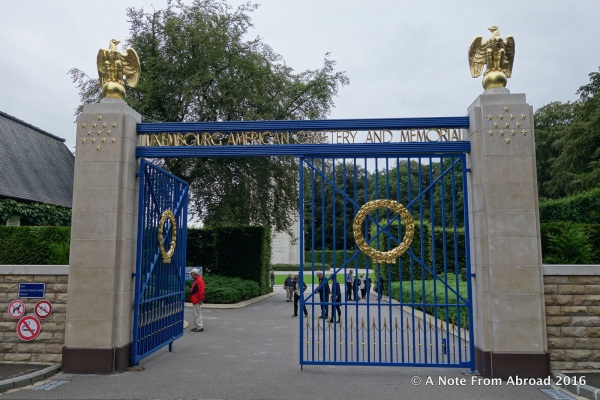 Entrance to the cemetery

The 50 acre cemetery holds the remains of 5,076 American service members, most of whom lost their lives at the Battle of the Bulge, which was fought nearby during the winter of 1944-45.

The most well-known grave is that of General Patton.

Although the country of Luxembourg is small, they have a healthy economy developing into a banking and administrative center. Here are a few interesting facts from ratings done in 2011: (I realize this is several years old, but still quite eye-opening)

Pretty impressive for a county that is FIVE TIMES SMALLER than Puerto Rico! Rhode Island is 1.2 times larger than Luxembourg. 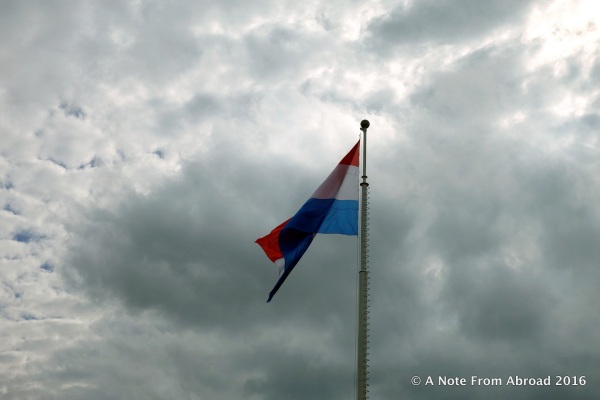 The flag of Luxembourg

How does their record stack up against the USA? I found a fascinating web site call “If it were my home“. They have an incredible data base where you can compare your home country with another at the click of a button

Next came a walking tour of Luxembourg City.

OK, I know that I am easily amused, but these pipe sculptures made me laugh out loud. When I first walked by, I noticed the face was looking at me:

Looking right at me

Then as I moved past, the eyes followed: 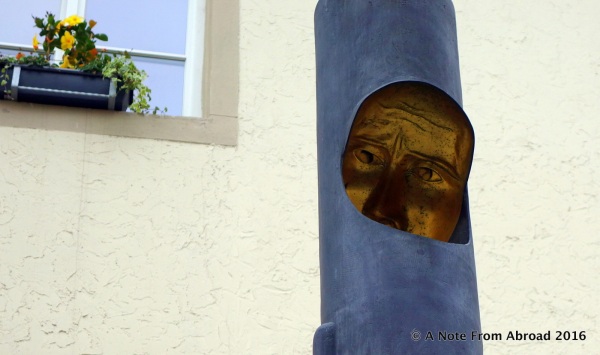 Watching me as I passed by

I got such a kick out of it, I had to go back the other direction: 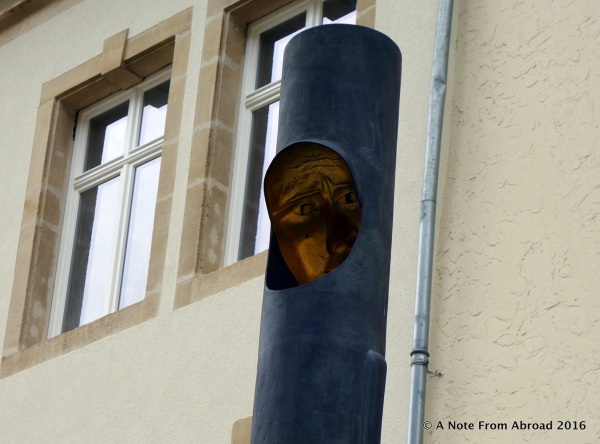 But the kicker came when it winked at me: 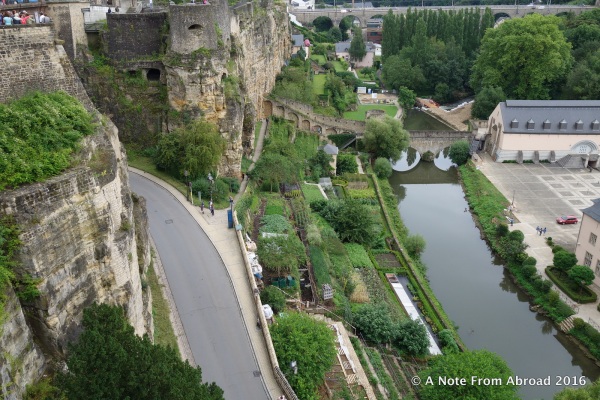 Looking down from “The Bock”

The Fortress of Luxembourg, which sat upon a large stone cliff known as the Bock, was mostly dismantled in 1867, helped earn the city the nickname “Gibraltar of the North”. Although little of the original massive structure and underground tunnels still remain, in 1994, the fortress and the city’s old quarter were listed as a UNESCO World Heritage Site.

View from the former fortress walls

The first church that was built on this location in 987, was the chapel for the castle. Having been destroyed and rebuilt several times over the years, the current building, a combination of Romanesque and Baroque architecture dates back to 1688.

Still with a little free time on our hands, we indulged in some sweet treats from a local bakery. And YES, they were yummy.

GRATITUDE MOMENT: Always, always grateful to have been born in the United States. We have so many blessings and freedoms here that others can only dream of. We have seen and experienced first hand the squalor, lack of health care, little or no education available, no clean water and a severe shortage of food, plus the struggle for basic housing in several third world countries. But sadly that also does not mean that we are the best in every category. The more we travel, the more we learn about how other countries handle things such as reasonable (or free) advanced health care, free or affordable cost of upper education, national security and reduction of crime rates, family leave and more vacation time. Luxembourg, tiny but thriving, was a pleasure to visit and has much to teach us, if we are open and willing to learn.

And whether or not you were a fan, (and believe me when I say that I am NOT trying to politicize this) these words seem to sum this all up:

“Too often, we judge other groups by their worst examples – while judging ourselves by our best intentions. And this has strained our bonds of understanding and common purpose.

But Americans, I think, have a great advantage. To renew our unity, we only need to remember our values. We have never been held together by blood or background. We are bound by things of the spirit – by shared commitments to common ideals.”― George W. Bush

Hi and welcome! We are Tim and Joanne Joseph and we have just embarked on our "next chapter". At a stage in life where traveling the world, taking pictures, and sharing our adventures with friends and family will be our dream come true.
View all posts by Tim and Joanne Joseph →
This entry was posted in Europe, Luxembourg and tagged Battle of the Bulge, Bock, Catholic Church, Cruise, Fortress of Luxembourg, General Patton, Grave, Gus, Luxembourg, Luxembourg American Cemetery, Moselle, Photography, River, River Queen, St. Michaels, Travel, Trier, trip, Uniworld, vacation. Bookmark the permalink.