Switzerland ~ Murren to Basel, and trying to be a local 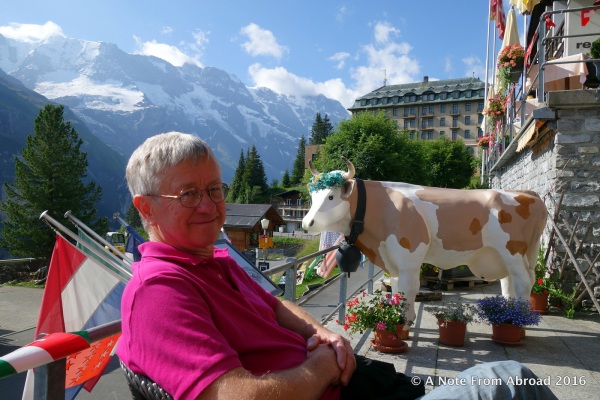 We were leaving behind our high mountain base in Murren where we had hiked in the sunshine, been enveloped with clouds, saw a triple rainbow and climbed amongst underground waterfalls. It somehow felt anti-climatic to walk across the street to get on a train, to then take a tram, to then take two more trains.

Ahhhh, such is the life of these world travelers 🙂

Not really much to say about this day other than it was a winding down, many transfers, wrapping up, cleaning up, switching gears kind of day.

View from our balcony overlooking the Rhine River in Basel (did you spot the swimmers?)

With an early start, we arrived in Basel in time for lunch. After checking into our hotel with a balcony overlooking the Rhine River, we set out to take care of business – DOING LAUNDRY.

The receptionist at our hotel, The Hotel Merian am Rhein, pointed us in the right direction, and after filling up a backpack and a small laundry bag we hopped on the local tram where we found a laundry facility. They loaded the clothes in the washing machine, said they would put them in the dryer and then when we returned we could fold them ourselves.

That gave us time for a nice local lunch and to wander around in old town for a few minutes before returning.

Other than the main square where we went inside the Basel City Hall we did not really take advantage of seeing any of the sites Basel is known for.

Basel, is the third largest city in Switzerland, following Zurich and Geneva with about 195,000 inhabitants. Located on the Northwestern corner of the country where Switzerland, Germany and France all come together along the mighty Rhine River.

Basel is home to Switzerland’s oldest university, the University of Basel, which dates from 1460. It is considered one of the top 100 universities in the world.

They also have a large pharmaceutical industry with companies such as Novartis, Syngenta, Hoffman-La Roche and Ciba Specialty Chemicals headquartered in Basel.

Perhaps they are not excited by this claim, however:

“On 16 November 1938, the psychedelic drug LSD was first synthesized by Swiss chemist Albert Hofmann at Sandoz Laboratories in Basel.” ~ Wikipedia

But the City Hall was impressive…

In the late afternoon we once again did as the locals do; walked along the Rhine River. It is a “thing” here to jump in the fairly brisk moving water and float along with a group of your friends.

The evening was topped off with a fabulous dinner at the restaurant at our hotel, the Café Spitz. It is well known throughout the whole region for its exquisite fish dishes and has received numerous awards. We enjoyed the “Devil Fish”, but the offerings change frequently depending upon what is in season. We both thought is was one of the best fish dishes we had enjoyed in a long time. If you are looking for a fish dinner in Basil, you might want to check this restaurant out.

GRATITUDE MOMENT: Today I am grateful to have had a brief moment where I felt like I was living as a local in Switzerland ~ taking the tram, going to a laundromat, eating lunch in an “off the beaten path” restaurant, and walking along the Rhine.

Hi and welcome! We are Tim and Joanne Joseph and we have just embarked on our latest adventure. We hope you will join us!
View all posts by Tim and Joanne Joseph →
This entry was posted in Europe, Switzerland and tagged Basel, Café Spitz, City Hall, Devil Fish, Holiday, Hotel Merian am Rhein, industry, Laundry, LSD, Murren, pharmaceutical, Photography, Switzerland, Train, Travel, trip. Bookmark the permalink.

10 Responses to Switzerland ~ Murren to Basel, and trying to be a local