Casablanca is More Than the Title of a Classic Movie

The city of Casablanca at our feet

Well, we were down to the last leg of our trip which included the bus ride from Essaouira to Casablanca. We were sorry to not have had more time in Essaouira as it was so charming and our free day got partly eaten away with lousy weather.

Crossing over a river on our way to Casablanca

We passed many horse, mule and donkey carts along the way

When we arrived in Casablanca (White House), we finally visited the first Christian Church, Notre Dame de Lourdes. The interior was modest compared to most churches we have visited on our travels. It is best known for the massive and impressive stained glass windows.

And a visit to Casablanca would not be complete without stopping off at Rick’s Cafe that was made famous because of the 1942 movie “Casablanca” starring Humphrey Bogart and Ingrid Bergman. This was a fictional place at the time as the movie was filmed on the Warner Brothers lots in Burbank, with a few scenes shot at the Burbank airport and in Arizona.

An enterprising American woman named Kathy Kriger replicated the setting and opened “Rick’s Cafe” here in Casablanca to much success. You could hear familiar clips such as, “Play it again, Sam” and “We’ll always have Paris” drift through the bus as we pulled up in front.

I must watch that movie again one of these days…

Right next door was a garage, which for some reason struck me funny. Not sure that I can explain why though?

A short walk through the Habous district and market and passing by the exterior of the Royal Palace was a non-event after the magnificence of the many fascination medinas of Fez, Marrakesh and Essaouira.

But the highlight of our limited time here in Casablanca was our visit to see the massive Hassan II Mosque, dramatically perched on a promontory on the Atlantic. 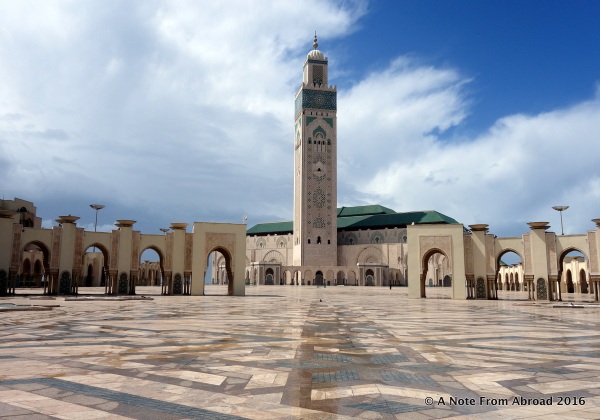 Its indoor and outdoor space can accommodate 105,000 worshippers with 25,000 inside and the remaining 80,000 in the surrounding courtyard.

The storm was still brewing and we were hit with gale force winds as we walked across the plaza. Truthfully it was quite difficult to stand up against the extreme strength of the brutal gusts, but with Tim hanging on to me for dear life we managed. It looks deceptively calm in these exterior shots 🙂 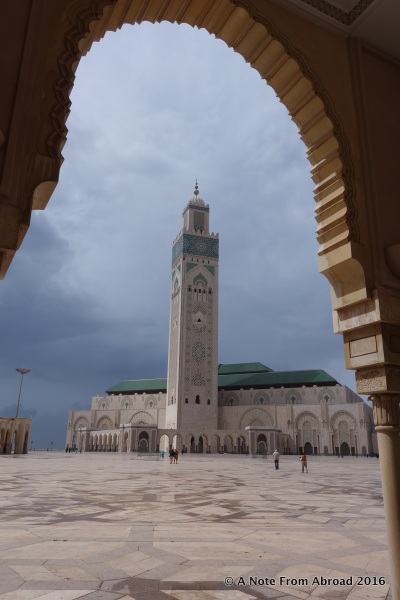 I was secretly seeking shelter when I took this shot…

It is the largest mosque in Morocco and the 13th largest in the world. The minaret however takes top billing as the tallest at 210 metres (689 ft).

This is a new building in comparison to all the other intricate architecture we have visited here. Completed in 1993, it took only six (or seven) years to build, which is pretty insane, when seeing the magnitude and magnificence of the interior. They had huge crews working around the clock 24/7 to accomplish their goal.

“During the most intense period of construction, 1400 men worked during the day and another 1100 during the night. 10,000 artists and craftsmen participated in building and beautifying the mosque.” ~ Wikipedia

Our guide told us six years, but Wikipedia says seven. Either way is off the charts impressive.

“The mosque rises above the Atlantic Ocean. The building is built partially on land and partially over the ocean. This siting was accomplished by creating a platform linking a natural rock outcrop reclaimed from the sea, where a swimming pool had previously been located. Two large breakwaters were also built, to protect the mosque from the erosive action of the ocean waves, which can be up to 10 metres (33 ft) in height. A temporary pier 800 metres (2,600 ft) in length had to be erected to protect the foundations of the pillars from the sea during the construction period. Its environmental advantage is that it is free of noise and pollution and receives a fresh breeze from the sea.” ~ Wikipedia

Oh, that is what that was, just a “fresh breeze”…

The interior takes your breath away. Our local guide walked us through the entire structure from top to bottom. We were instructed to take off our shoes before entering and carried them with us in a provided plastic bag.

The floors are all highly polished marble which is stunning.

The overhead roof is motorized, designed to open in the middle during good weather to show the sky. The moveable ceiling weighs 1100 tons and can be completely opened in just five minutes.

The level below holds the many fountains where the Muslims wash before entering the main part of the mosque. There are separate areas for men and women. 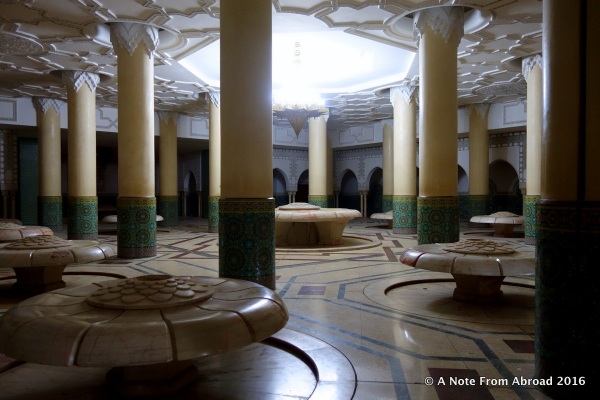 Fountains to perform their ablutions

And even further down is a public hammam (communal bathhouse) that is yet to be used.

Pools have still never been used

Our hotel provided one of the larger rooms we have had on this itinerary. With 28 floors, we knew we had returned to big city living. Our farewell dinner was on the top floor which presented us spectacular views of the entire city (see first photo at top of the page).

Our room at the Kenzi Tower Hotel

It is always bitter-sweet to complete a trip. Saying goodbyes to our fabulous guide and driver as well as new friends with hopes that our paths will cross on another trip in the future.

Sweet desert at our farewell dinner was finely chopped melons and other fruits with a citrus sorbet to cleanse the palate.

GRATITUDE MOMENT: Today I am grateful for the amazing trip we had exploring Morocco. Our guide, Ham, was probably the hardest working guide we have had on any of our Gate 1 trips. Always smiling and friendly, helpful and willing to go the extra mile to ensure that we had a flawless experience in his country.

An example of his “over the top” service: One of our tour members lost a small sack of argan oil she had purchased at the co-op. She was confident that she had left it on the bus. It could have easily been picked up by one of our co-travelers in error, or even accidentally tossed as trash. What ever the circumstance, Ham arranged for replacements (at no cost to her) to be bussed to us in Casablanca and were presented to her at our farewell dinner.

Our next stop is Portugal. Hope you will join us as we continue our amazing adventures…

Hi and welcome! We are Tim and Joanne Joseph and we have just embarked on our "next chapter". At a stage in life where traveling the world, taking pictures, and sharing our adventures with friends and family will be our dream come true.
View all posts by Tim and Joanne Joseph →
This entry was posted in Africa, Morocco and tagged Africa, Casablanca, Gate 1, Hassan II Mosque, Kenzi Tower Hotel, Morocco, Notre Dame de Lourdes, Photography, Rick's Cafe, Tour, Travel, trip, vacation, White City. Bookmark the permalink.