Kauai ~ Wiamea Canyon and beyond

Known as the “Garden Isle”, Kauai is the oldest and fourth largest of the Hawaiian Islands.

We were heading out on our own today. Once we disembarked in Nawiliwili (near Lihue), we spotted some rental car vans. The first one advised us they only had cars available that had been reserved. Moving on to Hertz, they had one van left for $65 for the day, so we took it. Just FYI, if you book ahead of time it is about half that, but since we were undecided on what we wanted to do, we just decided to “wing it”.

The Hertz van drove us about 10 minutes to the Lihue Airport where we got our van, picked up a magazine that included local maps and headed toward Wiamea Canyon. Beautiful clear blue skies, and temperature around 80, we were celebrating our good fortune.

The soil is almost blood red along the drive up the mountain toward the canyon lookout point and I was thankful to be able to pull over and shoot pictures along the drive.

Red Velvet Waterfalls (that is what we named it anyway)

Arriving at the lookout for Waimea Canyon, we were glad to have it relatively to ourselves, without a single tour bus in sight. 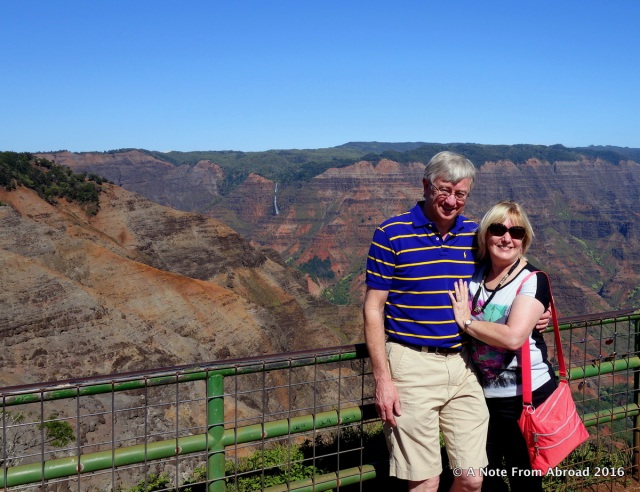 Tim and Joanne at Waimea Canyon

Gus was with us today

Next stop – something to eat. Tim found us a great little food truck in the small town of Waimea, Porky’s, where we had tasty pulled pork. First the bun was loaded up with grilled onions, followed by a sweet pineapple relish, and piled high with shredded pork. Then finally a slightly sweet, slightly spicy sauce was drizzled on top. I can recommend it if you get this way!

And of course we wanted to check out the waves… 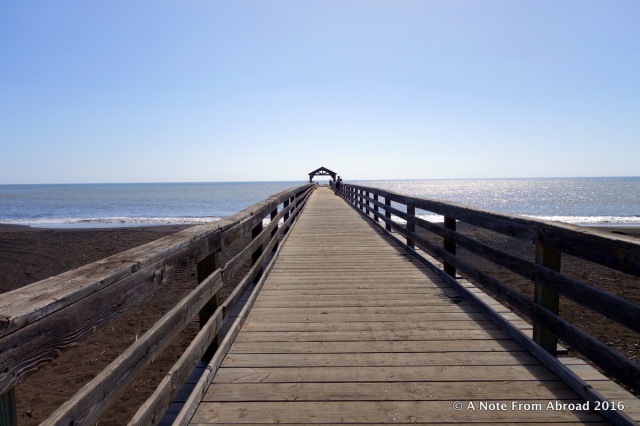 Another place that I had read about was the Hanapepe Swinging Bridge. Originally built in the early 1900’s as a convenient way for the local residence of this small community to cross the river, it was wiped out by Hurricane Iniki. The locals rebuilt and reinforced it, and today it is a local testament to their resilience and a piece of plantation history. 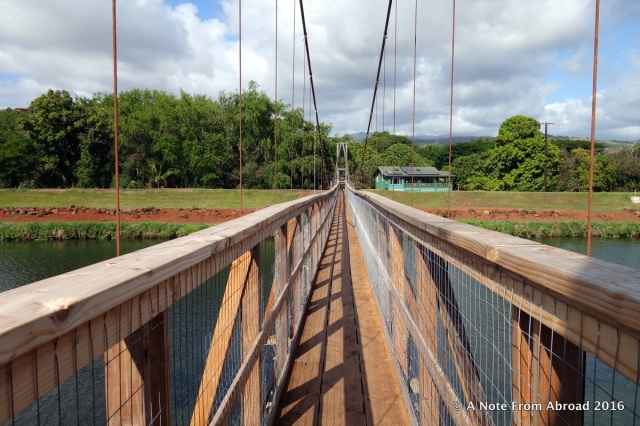 All of the Hawaiian Islands are covered with the most brilliantly colored flowers and Kauai was no exception.

Kauai has been shown in several major movies and TV shows, such as Jurassic Park and Lost to name a couple of my favorites. 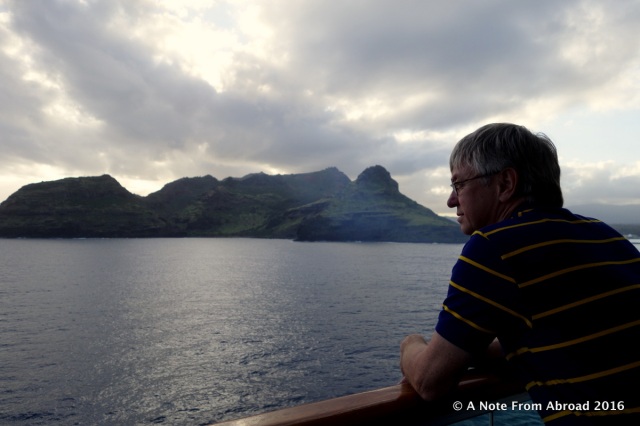 Tim on our balcony as we sailed out of Nawiliwili Harbor 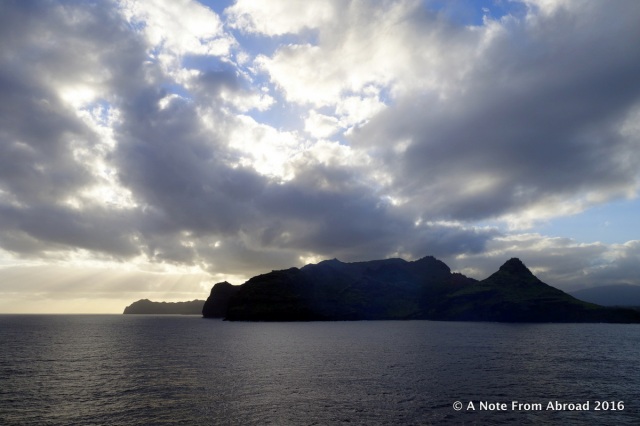 The island of Kauai

Gratitude Moment: Today I am grateful for my husbands willingness to go with the flo, being open to last minute change of plans, or simply being “open to the possibilities”.

Hi and welcome! We are Tim and Joanne Joseph and we have just embarked on our latest adventure. We hope you will join us!
View all posts by Tim and Joanne Joseph →
This entry was posted in Hawaii, United States and tagged Cruise, Hawaii, Kauai, Photography, Ruby Princess, Travel, trip, vacation, Waimea Canyon. Bookmark the permalink.

8 Responses to Kauai ~ Wiamea Canyon and beyond