How many letters in the Hawaiian alphabet?

Having been to Honolulu on several occasions over the years, we were looking to see something other than Waikiki beach, Diamond Head, Pearl Harbor or the Polynesian Cultural Center. Our choice – “Monarchs and Missionaries: Hawaii’s Royal History”.

Here is how Princess describes the tour:

Travel into the lush Nuuanu Valley, through a tropical rainforest en route to the world-famous Pali Lookout. The Nu’uanu Pali was the site of the Battle of Nu’uanu, one of the most important battles in Hawaiian history, in which Kamehameha I conquered the island of O’ahu, bringing it under his rule.

Our view was not quite as clear and perfect as usual, but nice none-the-less. Due to El Nino, the wind was coming from the South East, causing the normal clear blue sky to be hazy. The wind brought in some of the smoke and gasses from the erupting volcano on the Big Island (Hawaii), which they call VOG.

A short photo stop at the King Kamehameha statue was next. 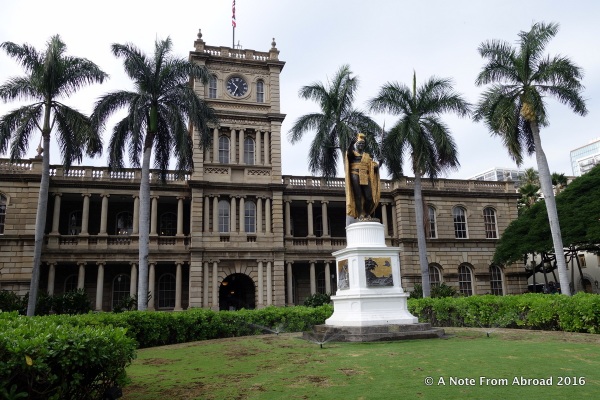 A visit to the Mission Houses followed.

“The royal history would not be complete without understanding the role Christian missionaries played in shaping the islands. At the Hawaiian Mission Houses Historic Site and Archives (HMH) you will visit three restored houses, two of which are the oldest houses in Hawai’i, and learn about research archives which provides a unique glimpse into 19th-century Hawai’i both on site and online. The site was designated a National Historic Landmark in 1965.” – Princess Cruise Lines

The Missionaries were assigned the task of converting the Sandwich Islands (as Hawaii was called back then) inhabitants to Christianity. They were also instructed “…to make them acquainted with letters; to give them the Bible with skills to read it.”

This presented the added challenge because the Hawaiians did not have a written language at that time. In the 1820’s a phonetic language was written down using five vowels and twelve consonants – A, B, D, E, H, I, K, L, M, N, O, P, R, T, U, V, W

A printing press was shipped in and the missionaries slowly, one chapter at a time translated the Bible and distributed (sold or traded for provisions) copies to the locals. 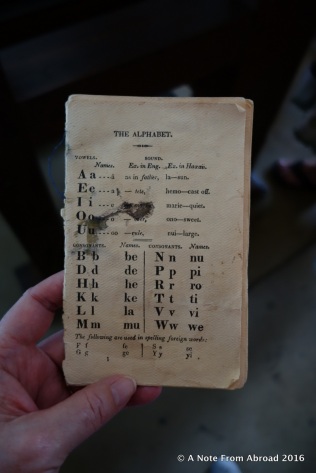 Reproduction of the original printing press

Today the printed language has been further shortened with several letters eliminated. Currently there are only 12 letters – A E H I K L M N O P U W plus the ‘Okina shown as an apostrophe.

Our last stop was to tour the Iolani Palace. We were fortunate to listen to a brief concert by the Royal Hawaiian Band as we waited for our tour guide to collect our tickets for the group.

“A guided tour inside a true Hawaiian national treasure, Iolani Palace, is next. This is the only official state residence of royalty in the United States and was the home of the Hawaiian Kingdom’s last two monarchs – King Kalakaua, who built the palace in 1882, and his sister and successor, Queen Lili’uokalani.” – Princess Cruise Line

Outfitted with self-guided headsets and booty covers for our shoes, we made our way room to room covering two stories plus the basement museum/jewel display.

Quilt Room where the queen was imprisoned

Gratitude Moment: Today I am grateful for the opportunity to learn more about the history of Hawaii, where her people came from, their language, how the Hawaiian Islands were formed, and a little about the monarchy.

P.S. I highly recommend a visit to the Polynesian Cultural Center for anyone who has not already been there for a wonderful introduction to the history and culture of the islands.

6 Responses to How many letters in the Hawaiian alphabet?