Our Gate 1 tour came to an end on the evening of the 25th. Tim and I had a couple of days on our own in Johannesburg where we just took it easy and relaxed. I had done some work on photos, a bit of writing on our blog, and not much else. Tim went out on his own a couple of times to scout the area and came up with some eating options outside of the hotel. We also managed to get some laundry done.

On the 27th, we were picked up by a driver and transferred to our next hotel, Protea Midrand, where we met our new Msuna Safaris and Travel group. This part was coordinated by our friends, Ben and Yulia who we had met the previous February in Turkey. It was their email invitation to join them that had put the ball in motion for this trip.

Our new group consists of 20 members, plus our group leader, Brian.

Shortly after our group convened, I asked Brian about the latest news from Soweto, knowing that our itinerary included a 4-hour bike tour there. As you may recall, only three days earlier, our scheduled Gate 1 tour to Soweto had been cancelled due to violence in this area.

Brian was not aware of the problems, but after checking with a local contact, deemed it safe for us to proceed with our original plans, so…

Up bright and early on the 28th we hop into two vehicles and arrive at Lebo’s Backpackers for breakfast before the group members are each assigned a bike and offered a helmet. I was surprised that only a couple of people chose to wear a helmet, but I was thankful that Tim was one of them. 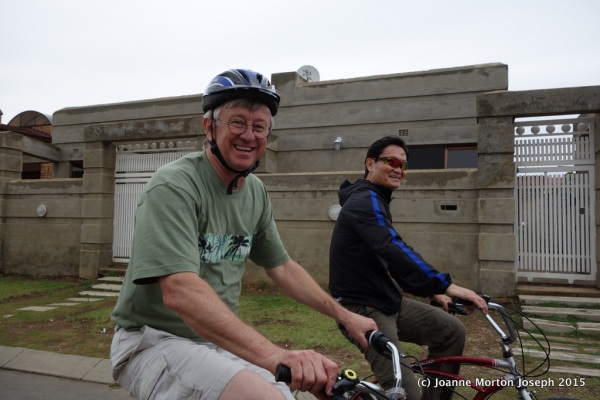 Tim and our friend Ben 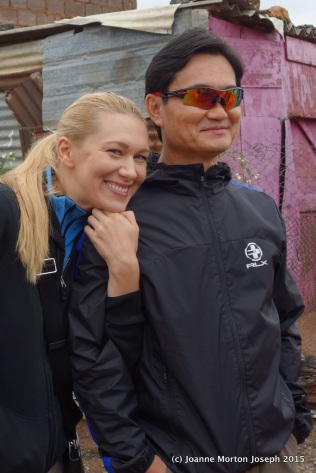 Since my balance is still a little questionable, I had made arrangements for a Tuk Tuk driver to take me along instead of risking a spill on a bicycle. Yulia was so sweet, and offered to join me. 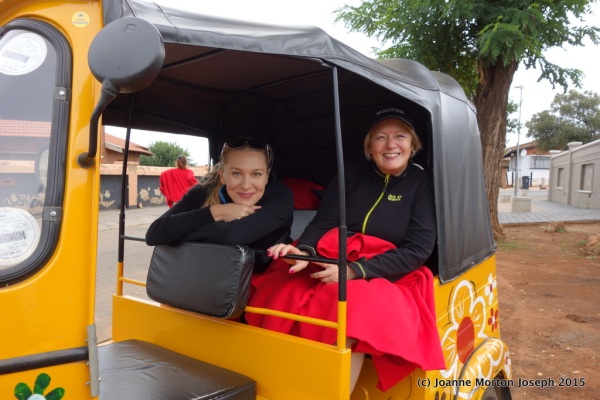 Yulia and Joanne in a Tuk Tuk

Out of the blue, I asked our driver if he would teach me how to drive the Tuk Tuk, and much to my surprise, he agreed.

So, another first for me – driving a Tuk Tuk… 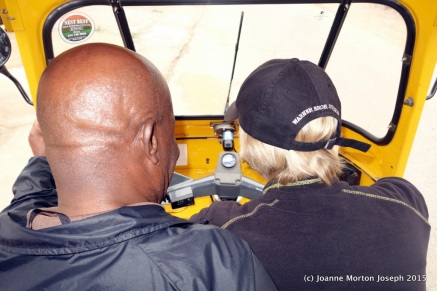 Learning to drive the Tuk Tuk

The ride took us into an area that reminded me of Langa, on the outskirts of Cape Town that we visited earlier on the Gate 1 portion of our trip. The housing was perhaps a little better, but still no running water or plumbing. This section had been set-up as a camp for former migrant workers for the mining industry. 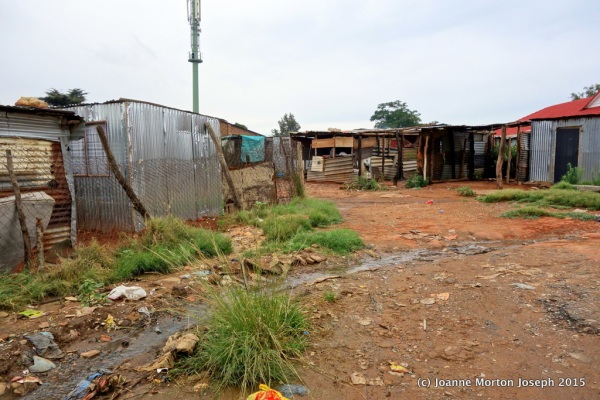 We stopped at a shebeen to try beer, which is brewed by the locals.

Originally, an illicit, or illegal bar, where alcoholic beverages were sold without a license.

“In South Africa and Zimbabwe, shebeens are most often located in townships as an alternative to pubs and bars, where under apartheid and the Rhodesian era, indigenous Africans were barred from entering pubs or bars reserved for those of European descent.

Originally shebeens were operated illegally by women who were called Shebeen Queens and was itself a revival of the African tradition that assigned the role of alcohol brewing to women. The Shebeen Queens would sell home-brewed and home-distilled alcohol and provided patrons with a place to meet and discuss political and social issues. Often, patrons and owners were arrested by the police, though the shebeens were frequently reopened because of their importance in unifying the community and providing a safe place for discussion. During the apartheid era shebeens became a crucial meeting place for activists, some attracting working class activists and community members, while others attracted lawyers, doctors and musicians.” ~ Wikipedia

Already having been warned on our previous tour to not drink any of the home-made beer, due to the fact that it can have toxic chemicals added, such as battery acid. Sixty-nine people had died only last month from this experience (in Mozambique). Better safe than sorry this time. 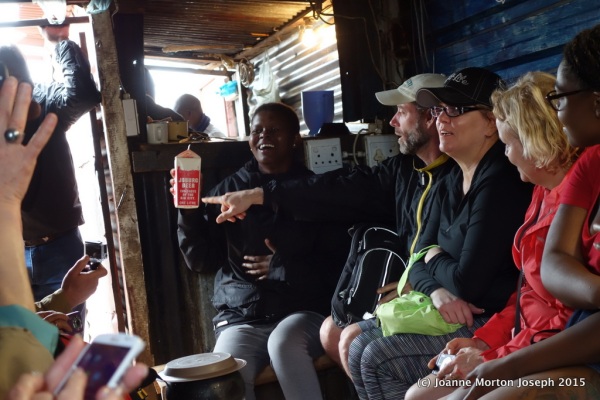 Inside a shebeen in Soweto 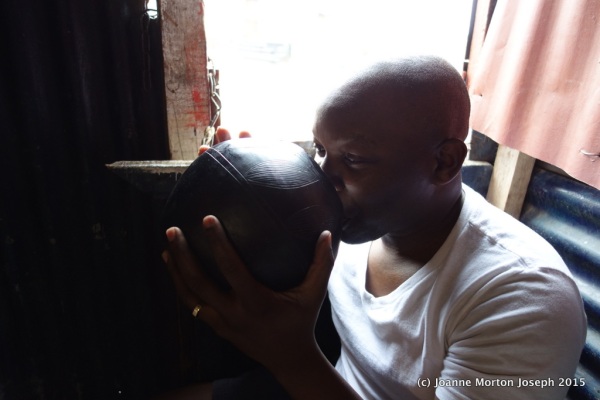 Our leader, Brian, drinking the local brew from the communal pot

The communal bowl was passed around the room, but Tim and I politely had our picture taken and passed the bowl on down the line.

Just a smile and passed on down the line…

I did however try the cow cheeks and local dish made from white corn meal that were offered with salt and a hot spice.

The little children waved madly to capture our attention

Amazing to me is that the government has built a number of new brick buildings for housing over the past few years, but due to bureaucratic problems, they STILL remain empty to this day. Tim looked inside one and saw that the wiring and plumbing had been stripped for its copper. 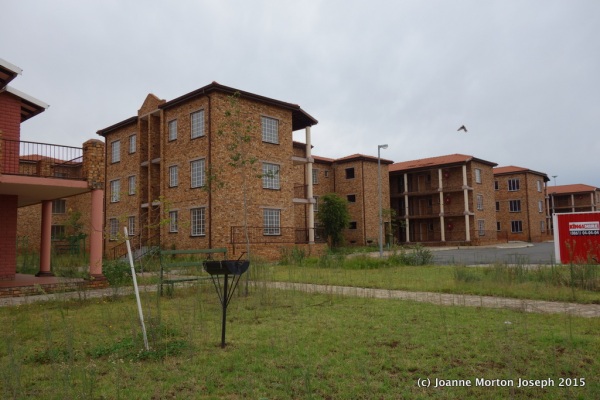 This was also where the Soweto Uprising occurred in 1976. The students led a protest because the local government was insisting on educating in Afrikaans instead of English. Police opened fire on 10,000 marching students resulting in 23 deaths in the first day (21 blacks and two white) including 13-year-old Hector Pieterson.

There is now a memorial and a museum near where he died. 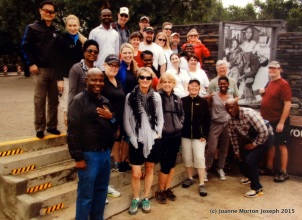 Continuing on to Vilakazi Street, we made a stop at Nelson Mandela’s early home, as well as where Bishop Desmond Tutu has his home. This is the only place where TWO Nobel Price winners had lived within a block of each other. 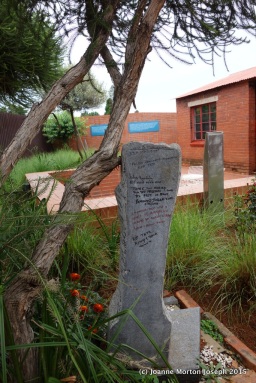 Back side of Nelson Mandela home

Plaque on the wall at Desmond Tutu house

We also came across a bit of entertainment. These dancers performed for tips. 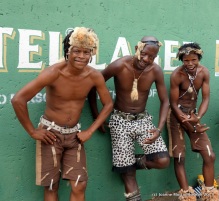 And a few signs I found interesting: 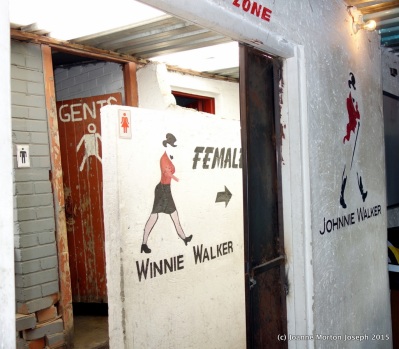 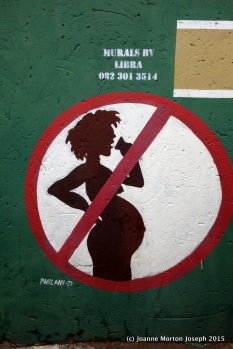 Our day was topped off with a short stop in downtown Johannesburg where we briefly explored an outdoor farmers market before returning to our hotel for the evening.

Buy some fruit or get your hair braided in the market place.

Several members of our group opted to go out on the town, but Tim and I chose to have a quick meal at the hotel and an early bedtime.

How strange it is for me to be the OLDEST person on the tour. This is definitely a first for me and I’m not so sure I like it!

Gratitude Moment: Today I am grateful that we got to explore Soweto with no unpleasant events or side effects. The violence seems to be over with, at least for now.

Hi and welcome! We are Tim and Joanne Joseph and we have just embarked on our "next chapter". At a stage in life where traveling the world, taking pictures, and sharing our adventures with friends and family will be our dream come true.
View all posts by Tim and Joanne Joseph →
This entry was posted in Africa, South Africa and tagged Bicycle tour, Bike, Desmond Tutu, Hector Pieterson, home, Nelson Mandela, Photography, South Western Township, Soweto, Soweto Uprising, Travel, Tuk Tuk. Bookmark the permalink.