Another whirlwind day in Edinburgh with great friends

Another busy, whirlwind of a day with Dick and Karen, starting off with a ride on a giant carousel that was installed just for the festival.

This was followed up with us climbing up 287 steps to the top of the Scott Monument to capture some amazing views of the city.

“The Scott Monument is a Victorian Gothic monument to Scottish author Sir Walter Scott. It is the largest monument to a writer in the world” ~ Wikipedia

The monument is an intricate creation that requires a bit of endurance and athletic agility to climb all the way to the top.  Broken up with four different viewing levels, it provides an amazing opportunity to see both the old and new city in great detail.  The tricky part is how narrow and winding the staircase is.  Barely wide enough for one average size person to get through, look out if you happen to meet someone going down when you are on your way up (or vice versa). 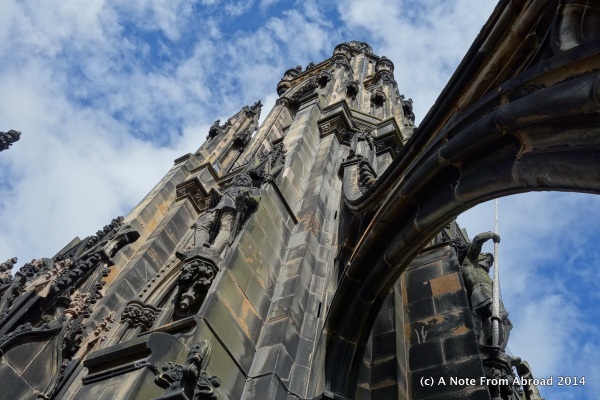 Look at the details and tiny, narrow stairway 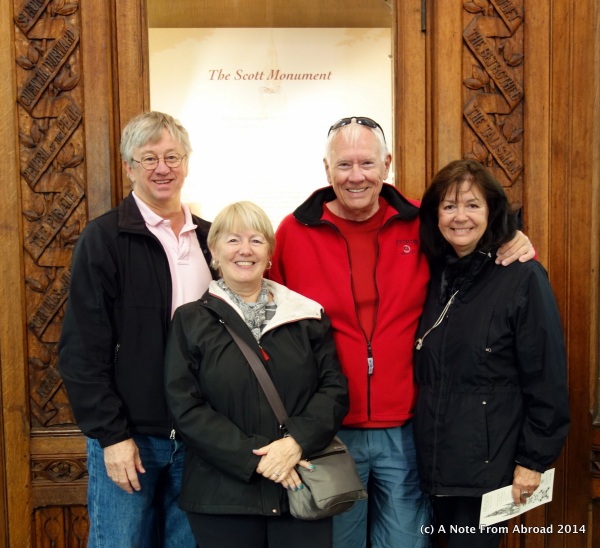 The views were worth the effort

The hop-on hop-off bus was next on our list. Tim and I had used this same bus line last month when we stopped here on our British Isles cruise, but this time we took a different route for more of an overview of the city.

Here are a few random shots taken around town: 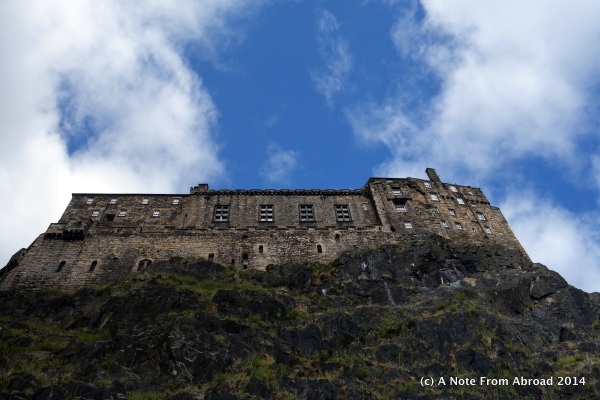 Edinburgh Castle from below

Unknown building (but I liked it)

After lunch on the Royal Mile and completing the city route, we chose a second loop that would take us past the Royal Botanical Gardens and over to the port where the now retired vessel, the Royal Yacht Britannia, is permanently berthed and available to tour.

I was quite fascinated by the entire ship and took a lot of pictures.  I am including small thumbnail size prints so that this page will not take forever to load, but if you are interested in seeing more details, just click on the pictures and larger ones will pop up that you can easily scroll through.  We spent a couple of hours here and I thoroughly enjoyed seeing how the royal family lived while on board.

Only double bed on the ship. Where Charles and Diana had their honeymoon.

How the hats are cleaned and shaped

Gratitude Moment:  Today I am grateful for getting a glimpse into what life was like for the Royal Family on board the Royal Yacht.  I’m not really sure that I understand the fascination, but I, like so many others, have a curiosity about a life style so completely different from my own.  The titles, formalities and protocol are foreign on more than one level, but it was a treat to imagine, if only for a short time, what cruising in the lap of luxury would have been like.

Hi and welcome! We are Tim and Joanne Joseph and we have just embarked on our latest adventure. We hope you will join us!
View all posts by Tim and Joanne Joseph →
This entry was posted in Europe, Scotland and tagged Britannia, Edinburgh, hop on hop off bus, Photography, Scotland, Scott Monument, Travel. Bookmark the permalink.

2 Responses to Another whirlwind day in Edinburgh with great friends