Looking for Nessie on Loch Ness, plus Glencoe and the Scottish Highlands

Warning:  This is a long post from an even longer 13 hour tour… 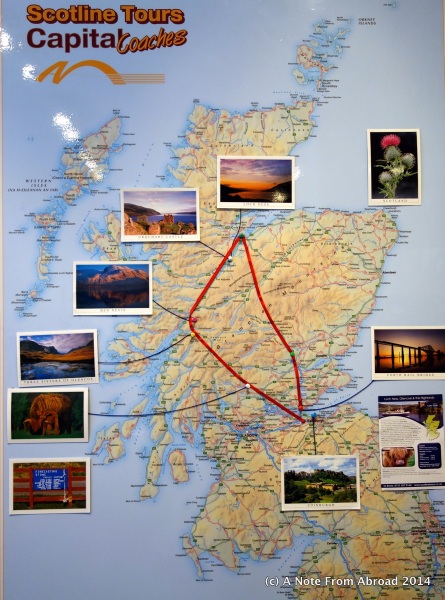 Map of the area we would be covering

The wind was howling this morning and we hung onto our belonging as we headed out the door just after 7:00.  Rain gear and umbrellas at the ready, we realized that if we did not just get out there, regardless of the weather, that our time in Scotland would be gone without us getting to some of the things we had come all this way to see.

We chose Scotline Tours for todays excursion.  The price was reasonable and although a long 13+ hour day was ahead, we were excited to finally be getting to the Highlands area. Scotline offers several one day trips, but we chose the Loch Ness, Glencoe and the Highlands journey for a couple of reasons:

Our morning got off to a shaky start when our driver/guide Peter advised two young girls about to board, that for safety reasons they could not take their hot beverages onto the bus with them.  I’m assuming the reasoning is that if there is an accident or sudden stop, that a flying cup of scalding liquid might not feel so good.

Peter then went back into the office for a moment.  While he was gone, the two girls got on board with their coffee tucked under their jackets.  When Peter returned a minute later, he performed his pre-departure headcount and then from the front of the bus, announced that the two “ladies” that smuggled the coffee aboard under their jackets would need to take their coffee off the bus.  He then got back off the bus, returned to the office to allow them to do as he requested.

I guess they thought they could simply ignore his earlier instructions, and later request and just wait him out.  I wanted to say something to them, but kept my mouth shut.  Their immature lack of consideration bothered me.

Eventually Peter got back on the bus and we left Edinburgh, a few minutes late, but on our way…

I snapped a couple of pictures as we departed the city including one of Edinburgh Castle high on the hill that shows the stadium style seating on the left side where we sat to watch the Military Tattoo last week.  A fabulous show that I highly recommend to anyone that has the opportunity to attend.

Here is a link to my write-up and pictures from the Tattoo if you are interested.

At our morning coffee stop we got to meet Hamish, a 21-year-old fella with a habit of posing for frequent tourists. The Highland Cow is the oldest pedigreed breed of animals in the world.  A docile animal with wicked looking horns, raised mainly for their meat.  They have little fat, but a double coat to protect them from harsh winters.  The long fringe or “dossan” keeps the wind and rain out of their eyes during the winter and shield them from sun and insects during the summer.

Peter managed an ongoing dialog to keep us entertained, filling us in on the story of Rob Roy, and the infamous 1692 massacre at the Weeping Glen of Glencoe,

Several of my pictures below are taken from a fast-moving bus so the quality of them is fair at best, but I really wanted to have something to look back on to remind myself just how amazingly beautiful the countryside of the Scottish Highlands is.

One of several lochs (lakes) we passed along the way

Finally a photo stop when we reached the summit.

Lock system at the Loch

After our lunch stop, we arrived at Urquhart Castle.  Sitting on the side of Loch Ness, we explored the ruins before embarking on a one hour cruise on the lake.

Urquhart Castle on the shore of Loch Ness 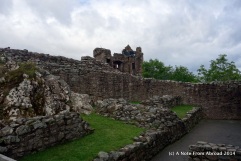 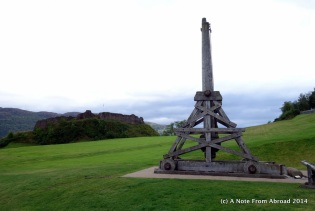 Tim (as usual) makes friends with all creatures, big and small. Of course having a handful of nuts and dried fruit probably gave him a little advantage this time around. 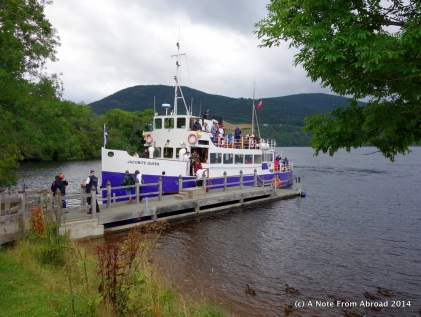 Never shy to ask, both of us got a chance to pilot the Jacobite Queen as we crossed Loch Ness.

Sadly, no Nessie sightings, but our weather continued to hold out and we escaped the rain until safely back onboard our bus for the last couple of hours ride toward Edinburgh.

I am always reminded of my mom whenever I see a rainbow and just as the sun was getting ready to set, this beauty appeared. 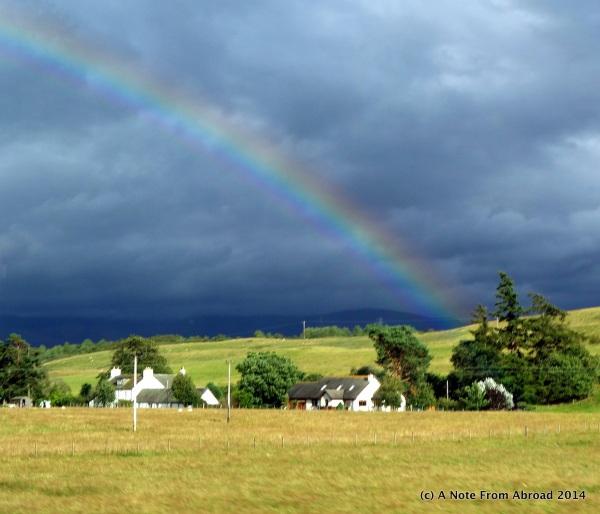 We arrived back in town at 8:30.  Tired but satisfied that we had thoroughly enjoyed our day.  Peter turned out to be one of our favorite guides that we have had on a day excursion. With his wit, combined with a knowledge of Scotland and her history, he managed to keep us awake and entertained all day on what he called a “monster tour”.

Gratitude Moment:  Today I am grateful for a husband that shares the load.  In fact he carries the load many days when I have my head buried in my laptop, editing photos, researching and writing my next blog post.  Today he walked to the grocery store, loaded up on groceries and lugged them all the way back, helped with doing laundry, cleaned the bathroom and washed the dishes.  I am such a lucky woman!

Hi and welcome! We are Tim and Joanne Joseph and we have just embarked on our latest adventure. We hope you will join us!
View all posts by Tim and Joanne Joseph →
This entry was posted in Europe, Scotland and tagged Glencoe, Loch Ness, Photography, Scotland, Scotline Tours, Scottish Highlands, Travel, Urquhart Castle. Bookmark the permalink.

13 Responses to Looking for Nessie on Loch Ness, plus Glencoe and the Scottish Highlands