We started our day off with the optional early morning hot air balloon flight which I wrote about and posted a separate entry on.  You can check it out here if you are interested in it. After returning to the hotel for breakfast, our entire group left for a full day touring the sites of Cappadocia. 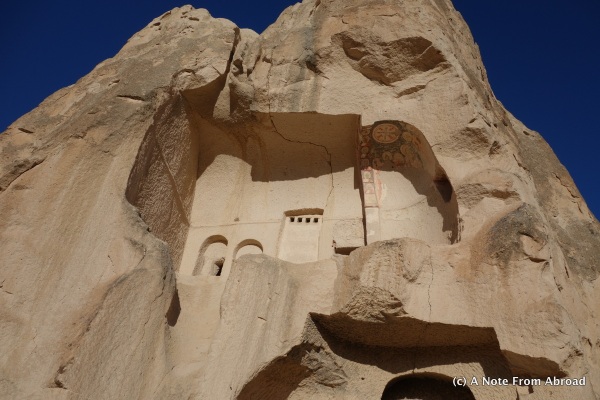 Church carved into the side of a rock

Located in central Turkey, this is a region made up of several cities.  Known primarily for the natural wonders that include unique rock formations, called fairy chimneys or hoodoos, dwellings carved into the soft rock hills and underground cities.

“The density of its rock-hewn cells, churches, troglodyte villages and subterranean cities within the rock formations make it one of the world’s most striking and largest cave-dwelling complexes.” – UNESCO 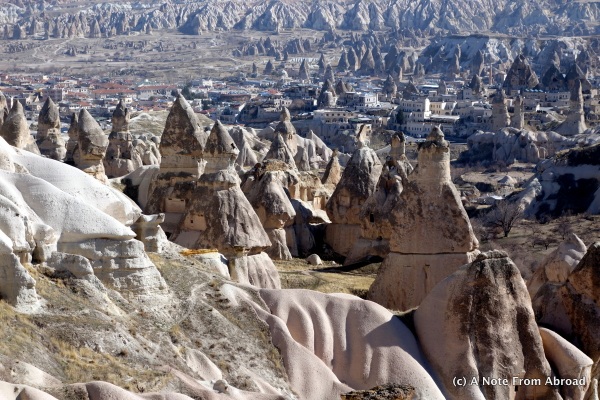 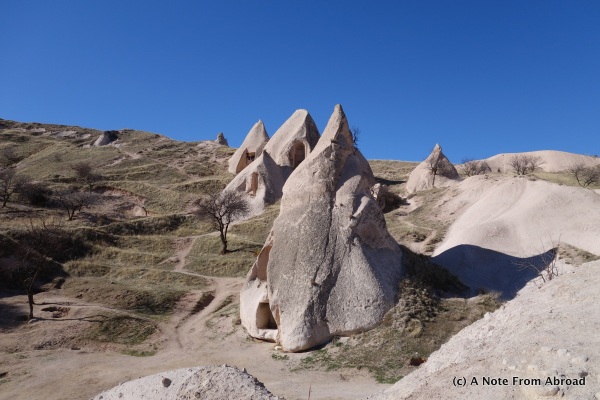 Dating back to the 10th, 11th and 12th century, this is a collection of the finest rock-cut churches, complete with brilliantly colored frescos. 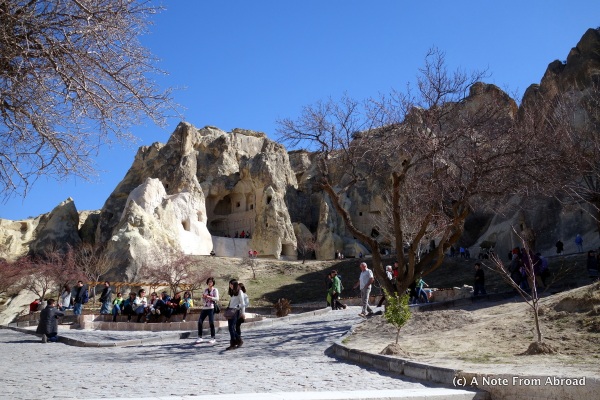 Many of the frescos have been defaced, however the best preserved and brightest colored ones can be seen in the Black Church.  There is an additional 8 TL entrance fee to tour this small church, but in my opinion it was worth the extra cost. 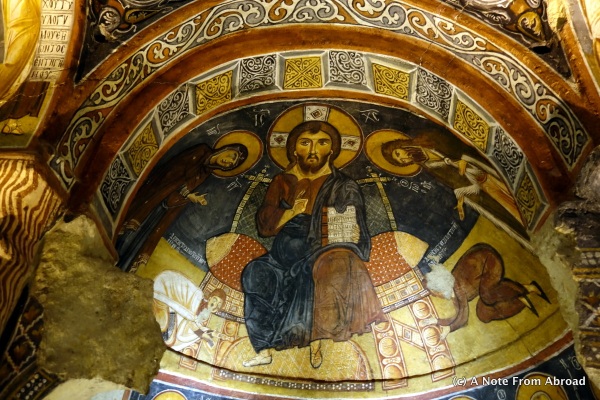 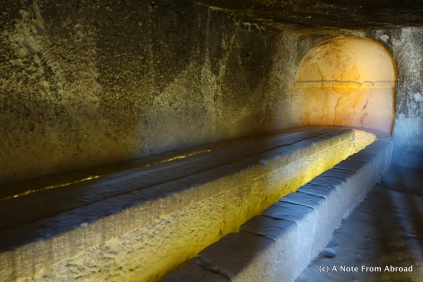 Gus in the window at Goreme

Another striking example of well preserved frescos was in the Tokali Church. 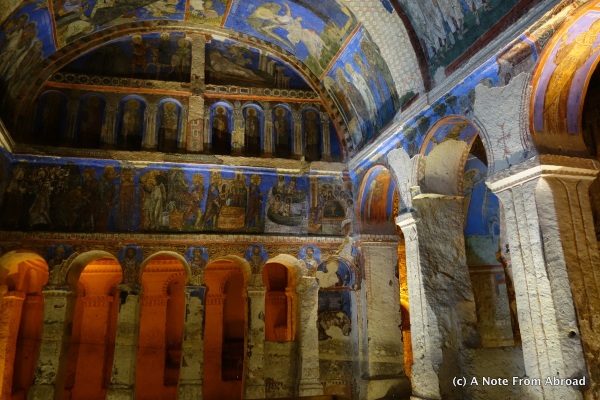 Due to religious persecutions, the early Christians founded safe havens underground – way, way underground.  Some of the complexes were huge covering square miles and could house 10’s of thousands of people.  We toured the one in Ozkanak, only discovered in 1972 by a local farmer.  This city could house 60,000 people for up to three months.

From the top, one would not even know of it’s existence, which was the whole idea. 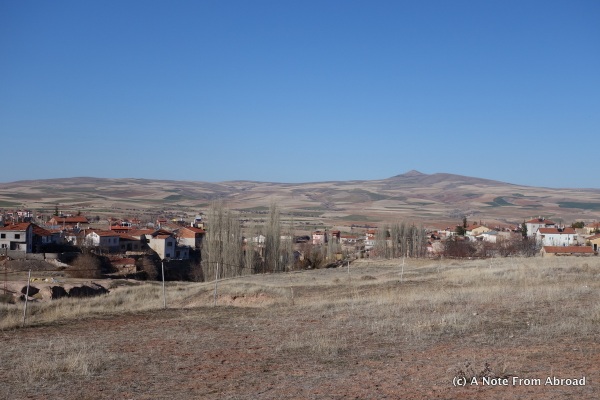 Only four stories are currently open to the public but it goes down 10 stories underground. I was a little anxious going through narrow passages as we descended down, but I managed OK even with my claustrophobia. 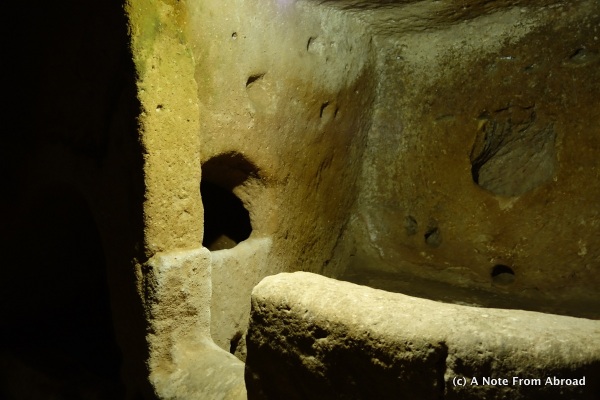 Looking up the air shaft to the surface from below

A massive round stone door was used to role in place to further protect them from invaders along with hiding places to ambush or even pour hot oil on intruders. 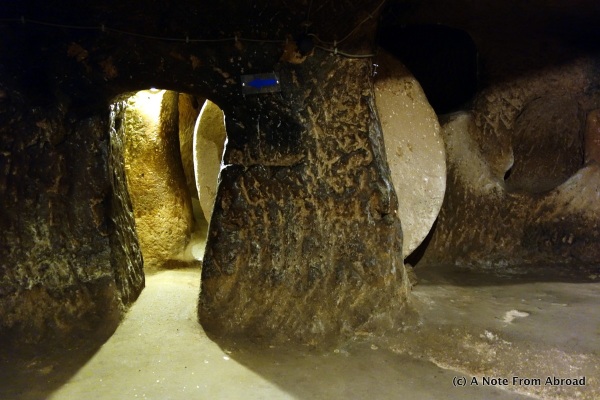 Ceramic pottery dates back to 2000 BC from the Hittite Civilization.  Sultan’s Ceramic factory is located underground and continues the traditions.  After a demonstration of how  plates and a wine canister are made anyone that was interested had the opportunity to make a purchase. 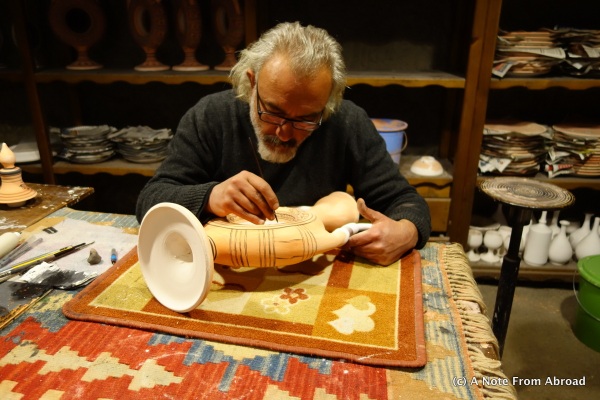 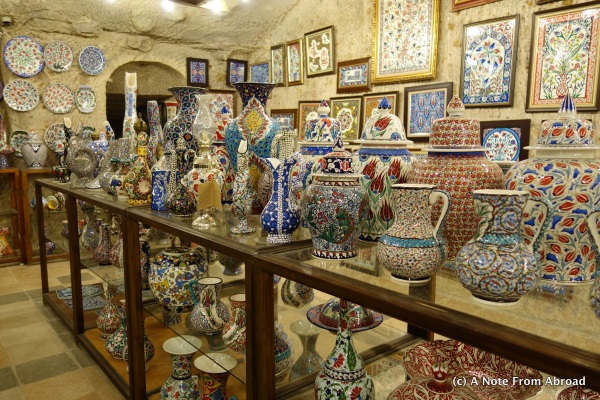 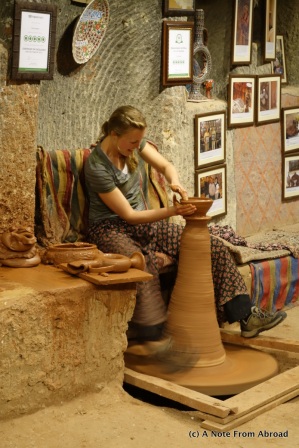 Tali demonstrates her pottery skills for the group 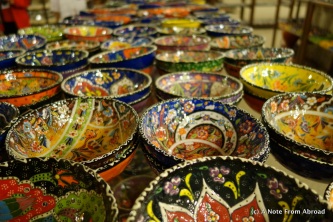 Sample of bowls to choose from 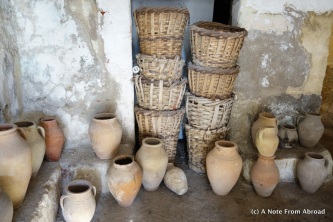 A couple more quick stops before returning to our hotel to check out a few more fairy chimney rock formations.  We caught the very last of the sunlight just as we arrived.  And then snapped pictures of the natural camel formation.  I tried to capture Ashley kissing it, but it is not very sharp.  It was still a fun shot. 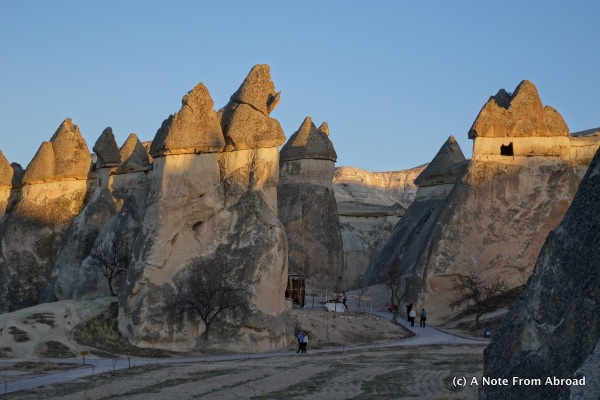 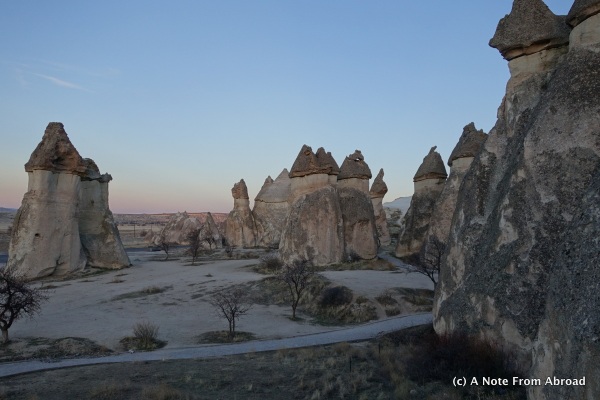 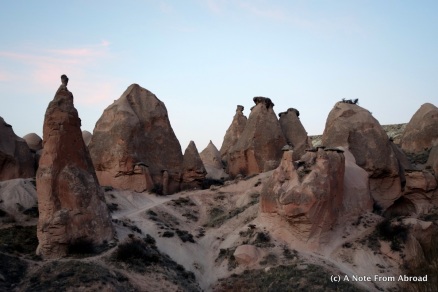 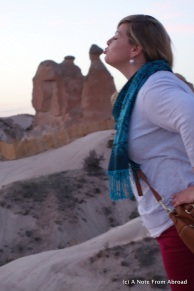 Gratitude Moment: Today I am grateful to witness some of the finest frescos dating back to the 11th and 12th century.

Hi and welcome! We are Tim and Joanne Joseph and we have just embarked on our latest adventure. We hope you will join us!
View all posts by Tim and Joanne Joseph →
This entry was posted in Asia, Europe, Photography, Turkey and tagged Cappadocia, Ceramics, fairy chimneys, Goreme, Hoodoos, National Park, Outdoor Museum, Photography, Travel, Turkey, underground city, UNESCO, World Heritage Site. Bookmark the permalink.