Wake up call was set for 5:30 and departure for our group of 11 on the optional hot air balloon trip was 6:00. The sky was just starting to lighten as we left the hotel. A twenty-minute ride brought us to the lift-off point where the balloon was already set up and in the final stages of being filled with hot gas.

The safety instructions were simple – Stay inside the basket at all times, no smoking, no high-heeled shoes and our pilot, “Borish” was the boss while on board. We also learned the position to be assumed for our landing.

All aboard and ready for lift-off

Loading into the larger basket (maximum 14 passengers plus pilot) went smoothly and by 6:30 we were in the air. A few minutes later the sun rose above the volcanic backdrop. Blue skies, almost no wind, a picture perfect morning for flying…

One by one more balloons joined us. At one point I counted 39 balloons around us.

The heavens filled with balloons

The terrain below was rugged and I would only butcher trying to remember the names of the type of rock formations, so I’ll simply show you a few pictures to try to set the stage.

Rugged terrain in the Red Valley

Rough and scenic terrain below

The ride was smooth and amazingly quiet except for our laughter, oohs and aahs and the whoosh of the gas periodically as our Russian pilot shot up another burst of flame to adjust the pressure inside the massive balloon over our heads. 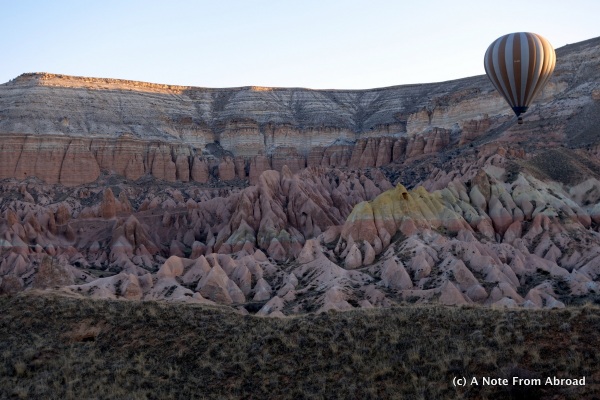 Many colors of rock 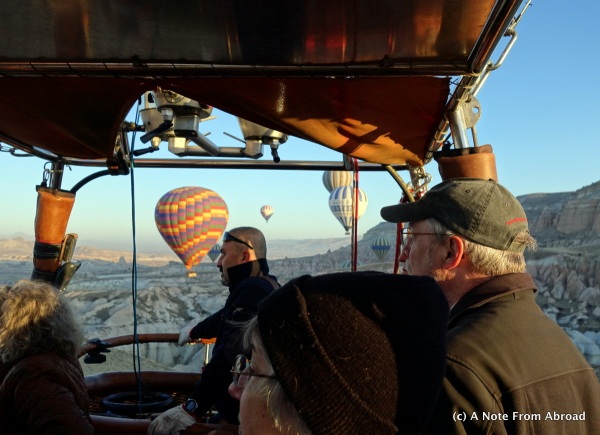 Drifting above the land

Flying over the canyon, at times lowering us closer to the ground so we could get a better look at the formations, then barely rise above a hill where we could have almost picked an apricot off of a tree – that is if there had been any fruit growing this time of the year.

An hour literally “flew by” and before we knew it we started our final decent. Borish, spoke into his radio, communicated with the ground crew and arranged our landing point. Just the day before I had heard rumor of a pilot being able to actually land a balloon right back on the trailer that hauls them, and much to my amazement and delight, he did just that.

As his ground team helped to adjust and secure us in place while the top vents opened and the massive balloon slowly deflated off to the side, we safely unloaded the basket.

Top vent is open to deflate the balloon

More fun followed as we walked on the canvas, pushing out the gas and further collapsing it, and of course taking pictures along the way.

Time to receive our flight certificates and drink a champagne toast. 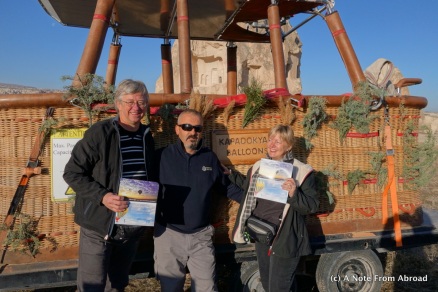 Take a look at the basket above sitting on the trailer that our expert pilot landed on!

I had been on the fence before the trip began about taking the hot air balloon ride. Tim and I had gone up in a smaller basketed balloon years ago in Southern California that took us over wine country near Temecula.

We had already decided to go to see the Whirling Dervishes the night before and had a full day optional tour for Cappadocia planned for that day. We were concerned that it would just be too much to try to crowd into the day.

As fate would have it, Gate 1 moved the Whirling Dervish event earlier, before dinner time, and we finally decided that it was simply too good of an opportunity to miss. We also thought it would be a wonderful way to celebrated Mark’s special birthday.

I’m so glad we went.

The balloon trip was just the start of the day and we were back at the hotel in time for breakfast and then off for a full day of sight seeing in Cappadocia.  But that will be covered in my next post…

Gratitude Moment:  Today I am grateful for volcanoes and erosion, as that is the combination that helped form the magnificent landscape we flew over.

Hi and welcome! We are Tim and Joanne Joseph and we have just embarked on our "next chapter". At a stage in life where traveling the world, taking pictures, and sharing our adventures with friends and family will be our dream come true.
View all posts by Tim and Joanne Joseph →
This entry was posted in Asia, Europe, Photography, Turkey and tagged Cappadocia, Hot Air Balloon, Photography, Travel, Turkey. Bookmark the permalink.