Posted on October 4, 2013 by Tim and Joanne Joseph

When one thinks of Transylvania, you can’t help but imagine vampires, mystery, and tales of the unknown.  Most everyone has heard of Count Dracula.  I too was curious to check out the legendary castle. Dracula’s Castle, formally known as Bran Castle, is not far from Brasov.  A former royal residence, the castle is now a museum open to the public with displays of art and furniture collected by Queen Marie. This turned out to be a disappointment and far from a highlight.  Too touristy, with everyone walking in lines through the interior.  The tour sadly did not leave any positive lasting impression. At the base of the hill leading to the castle was a small open air museum to wander through that offered up period crafts, cheap trinkets, photographs, souvenirs and cheese.

We managed to amuse ourselves while waiting for our group to grab a souvenir or two. 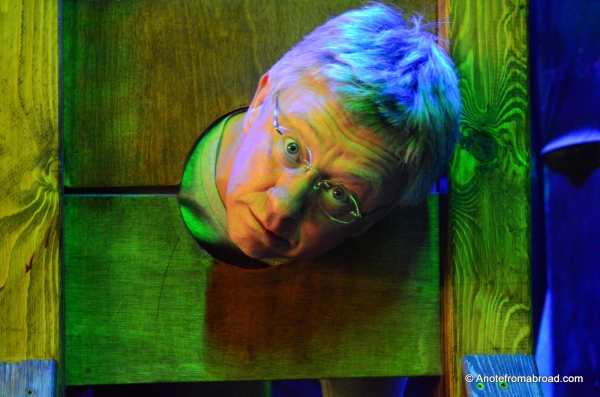 Back on the bus, we traveled just over an hour over beautiful mountain roads.  The scenery reminded me of alpine Switzerland.

On the road from Bran Castle toward Pele’s Castle 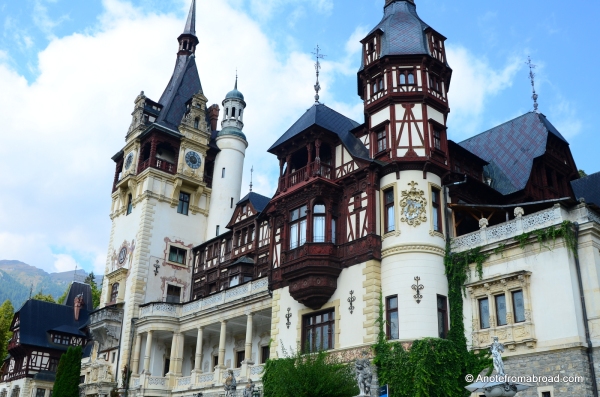 Before we arrived, I knew nothing about Peles Castle, a Neo-Renaissance castle in the Carpathian Mountains, near Sinaia. What a treat it turned out to be. Wanting something original in design, King Carol I rejected the first three designs that were submitted to him.  Finally selecting German architect Johannes Schultz for the project, the end result:

Peles Castle was used as a royal residence from 1883 until 1947.  It was nationalized in 1948, used as a museum from 1953-1975 and again from 1990-to the present.  It has been owned since 2007 by His Majesty, King Michael I of Romania. Having some time before our scheduled tour, we took in the garden, fountains and weathered sculptures.  The exterior could have easily been the setting for a period romance novel.

Photography was not allowed inside without purchasing a special permit.  I don’t recall how much it was, but not outrageous.  It rather surprised me that I was the only one in our tour group that decided to take interior shots. More a functioning palace than a castle, the interior includes over 170 rooms, 30 bathrooms, offices, libraries, armories, and art galleries.

And our day was not over.  Back on the bus again for another short drive to the town of Sinaia. SINAIA MONASTERY 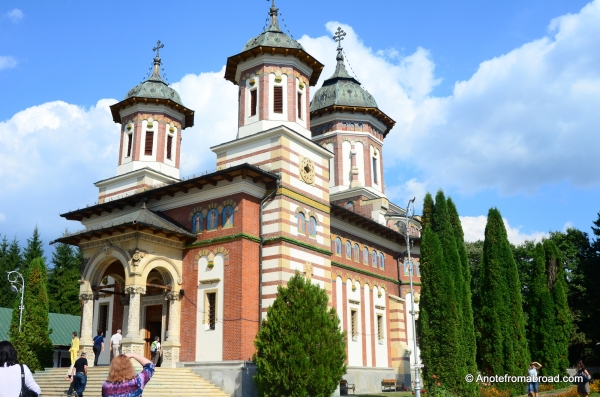 Meat on the grill

It was another long day.  For me the highlight was Pele’s Castle.  By the time we reached our hotel in Bucharest for the evening, I was ready to hug my pillow and get some shut-eye.

Hi and welcome! We are Tim and Joanne Joseph and we have just embarked on our latest adventure. We hope you will join us!
View all posts by Tim and Joanne Joseph →
This entry was posted in Europe, Romania and tagged Bran Castle, Dracula's Castle, Europe, Gate 1, Pele's Castle, Photography, Romania, Sinaia Monastery, Tour, Travel. Bookmark the permalink.