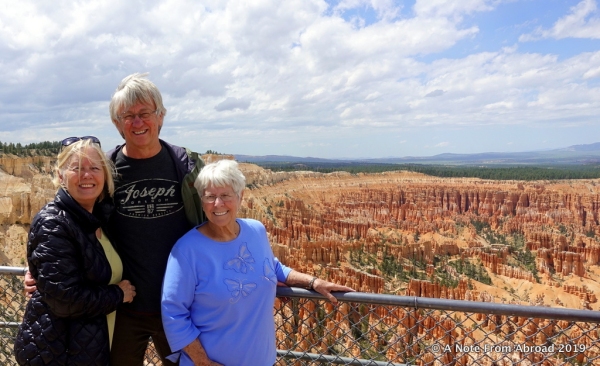 It’s all about the colorful rocks and hoodoos here in Bryce Canyon (which is technically not a canyon at all, but a collection of giant natural amphitheaters). Much smaller than nearby Zion NP, it receives only half as many visitors each year. It also sits at a higher elevation ranging from 6600 feet to 9100 feet at Rainbow Point, the far end of the park.

When we entered the park this morning, we asked a group if they would mind taking a picture of all three of us, and we would be happy to return the favor. They were pleased to help out.

Our trio in front of the National Park sign

After they snapped our picture, I wanted to take our (now traditional) picture of Shirley touching her toes in front of the sign.

I jokingly told the small mass of people waiting their turn to take a picture, to get their cameras ready – “83 year old about to touch her toes”. One of the guys got such a kick out of it, he said “wait, wait!” and quickly joined Shirley in her pose. 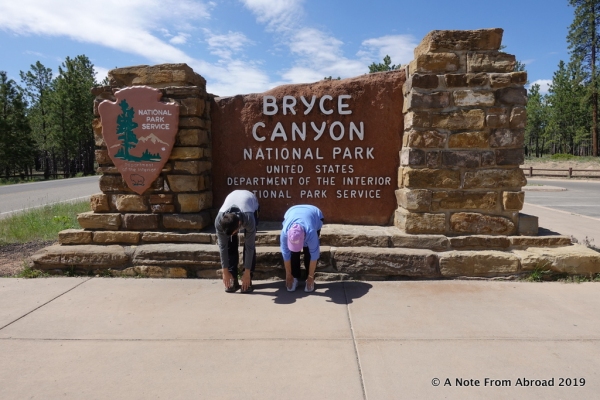 We decided to just hit a few of the highlight views of the park today and then have an early evening.

If  you drive all the way to the end of the park to Yovimpa and Rainbow Points, and then work your way back toward the entrance it makes it so much easier to do the pull-out scenic stops. Everything is on your right then and you are not crossing traffic.

But the jewel in the park is Bryce Amphitheater. There are several places to get spectacular views, but the ranger recommended Bryce Point to us.

Bryce Point – my favorite viewpoint in the park 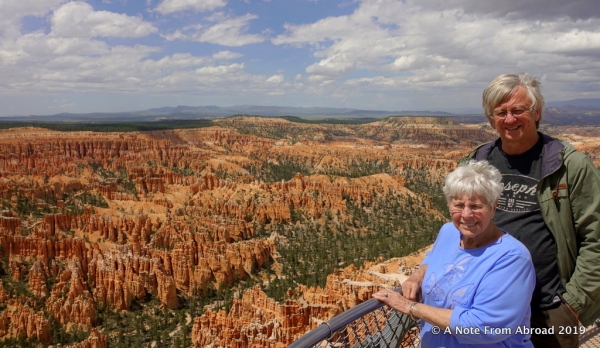 Shirley and Tim at Bryce Point

The ranger had highly recommended the easy half mile walk between Sunrise and Sunset Points, but we decided to leave that for another time.

GRATITUDE MOMENT: Today I am grateful that others not only were amused by our “toe touching grandma” but gave us an added chuckle by joining in the fun.