The wolves were howling again when I woke up. They were in harmony and rather pleasant to listen to until the campground owner’s dogs started barking. And so started my morning.

Before we pulled up stakes at Wolf Camp Campground, I decided that I had to go see the wolves. Joshua, a young man on staff, invited us to go behind the wooden fence situated behind the gift store/office. He proceeded to tell us more about the two wolves they have living behind wire fences. The white female is an Arctic Wolf and is the alpha in the pack. The male is a Timber Wolf and although larger is the beta. They have been here since they were just three month old.

Male is behind the alpha female

As much as I had enjoyed listening to them sound off periodically while we were here for three nights, it made me terribly sad seeing them confined.

Today was a travel day with a couple of stops mixed in.

“…named by early settlers after the dead trees found in its gulch. The city had its heyday from 1876 to 1879, after gold deposits had been discovered there, leading to the Black Hills Gold Rush. At its height, the city had a population of 5,000, and attracted larger-than-life Old West figures including Wyatt Earp, Calamity Jane and Wild Bill Hickok (who was killed there).” ~ Wikipedia

A lot of road construction was underway, so we had to park at the end of town next to the visitors center. Thankfully there is a trolly that circles town. It takes about an hour to make the full loop and runs on the 1/2 hour. Cost is $1 every time you get on.

We decided to have lunch at the Social Club which is upstairs over one of the saloons where a gunfight over poker was being reenacted as we arrived. Two of the gunslingers were happy to pose with Shirley for a photo after the performance.

Main Street in the historic district 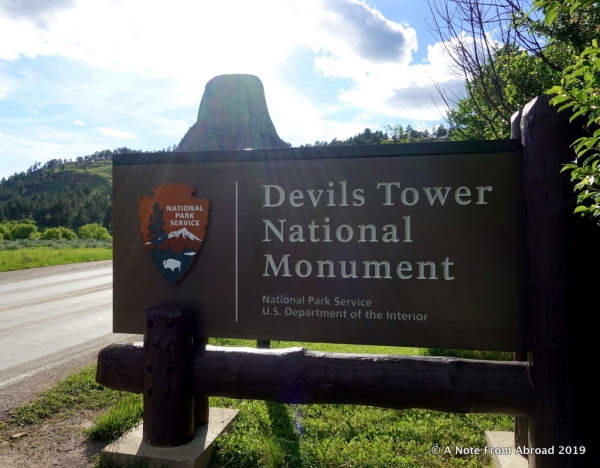 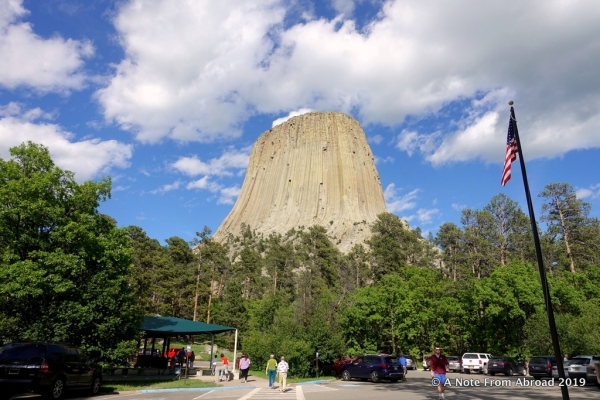 View from the Visitors Center 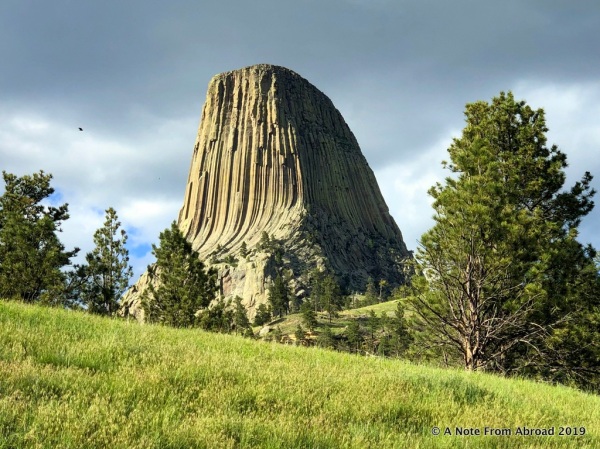 Another angle with sun on the west side

And we will close with Shirley once again showing me up, LOL. 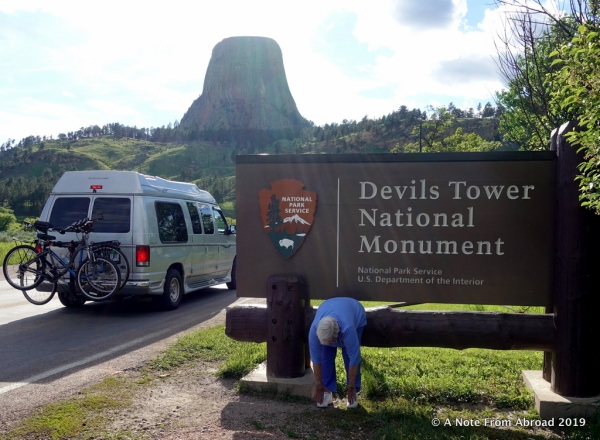 Touching her toes at the tower 🙂

Overnight: We are staying at the Devils Tower/Black Hills KOA just for one night. Our backdrop is the red rock that was glowing in the late afternoon sunlight.

GRATITUDE MOMENT: Today I am grateful that our schedule is flexible and that we are not rushed to get from place to place.

Hi and welcome! We are Tim and Joanne Joseph and we have just embarked on our latest adventure. We hope you will join us!
View all posts by Tim and Joanne Joseph →
This entry was posted in RV Life, South Dakota, United States, Wyoming and tagged Deadwood, Devil's Tower, National Monument, Photography, Road Trip, RV Road Trip, RVing, South Dakota, Travel, trip, vacation, Wolves, Wyoming. Bookmark the permalink.