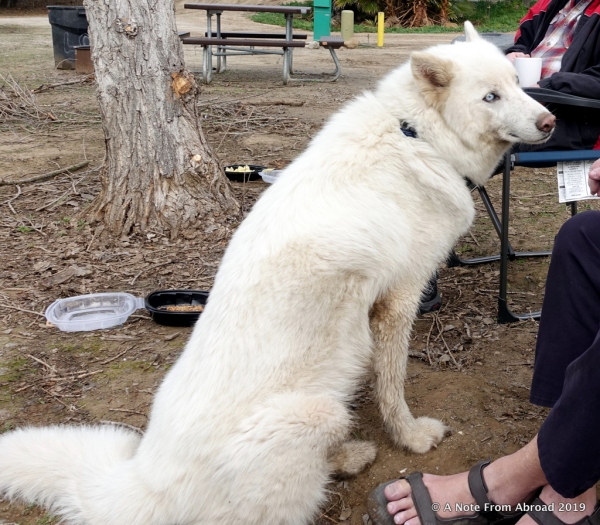 There is part of the story I left out of my write-up from Lilac Oaks Campground. I had hesitated on including this, but right up until our departure, this big character had been a welcome part of our stay.

On our first afternoon at the campground, we had just gotten set up and were enjoying watching the ducks in the pond when a VERY LARGE white dog wandered up to me. He was enormous, big blue eyes, and a long coat. He was one of the largest dogs I had ever seen. He was so big that I voiced that he might be part wolf, however his coloring probably belied that notion. More likely he is a shepherd and/or great pyrenees and husky combo.

He was wearing a collar, with his name on it. We made the assumption that he probably belonged to one of the permanent residents in the RV Park.

He was gentle, well-mannered, would sit on command, however appeared to have rather severe hip dysplasia and was slow to rise.

What stood out to us most was that he was painfully skinny. I had been feeding the ducks, so of course we also offered him a bit of food. We did notice that whenever he came close to us, that whatever ducks were feeding quickly took off into the water.

After getting a bit of attention, he wandered a few feet away and lay down beside our RV, watching us but not being a pest.

Later in the evening one of the park personnel stopped by to empty the trash cans and offered us trash bags. He spotted Leigon and shooed him off, saying he did not belong there and that someone “on the other side of the hill” owned him. They would call the owner periodically and he may or may not come and get him a few days later.

Sure enough, the next morning he was there again to greet us.

We left mid-morning for our lunch at a nearby winery. As we were leaving the restaurant, I noticed a sign that said “dog friendly”. They also offered that you could purchase either a chicken or beef dinner for your dog for $4.95. It came with noodles???

Of course I could not resist, and ordered a chicken dinner to take back for Leigon. I’m not sure what kind of seasoning they put on the noodles to make them appealing to dogs, but they stunk up the entire car…

We did not see him at all that evening and both Karen’s leftovers and his special meal were left uneaten.

But the next morning, bright and early he was back. We were getting rather attached to him and enjoyed seeing him get a solid meal. Well, part of it anyway, he too must have thought that the noodles were unappetizing as he ate the chicken and left the rest.

Leigon eating his special meal (except for the noodles)

My story would have probably ended here, but for one last episode with him shortly before we broke camp. Karen and I had decided to walk around the pond so I could get a picture of our campsite from the other side.

Leigon tagged along with us.

All of a sudden we spotted a rooster, a hen and a silkie down near the water. Leigon took off at a full run after them. Karen screamed at him, “NO” and to stop to no avail and he managed to capture a mouthful of feathers from the hen. We still don’t know if the hen survived, as it was by this time hidden in the cattails.

He then took off after the rooster, who also managed to get just out of his reach, or so we hoped.

The four of us were upset by the episode, and Tim explained to me that once a dog starts killing chickens it is impossible to get them to stop.

We completed packing up, Leigon was no where in sight, and as we were pulling out, Karen caught sight of him, running past them with the rooster in his mouth. 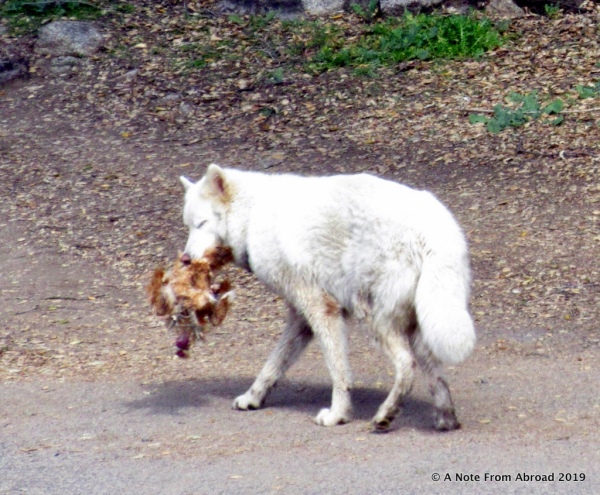 In that moment he went from being a big friendly dog to a big S^!t in our minds.

Tim, ever the philosopher, stated that the chickens at the pond probably had a better life, living free in nature, than the ones butchered and sold in grocery stores.

Today I am still torn by the entire episode. After all, we still eat some meat, in fact had dined on BBQ chicken ourselves only a night or two earlier. And Leigon was painfully skinny so perhaps this was how he was surviving.

GRATITUDE MOMENT: Today I am grateful that in the midst of this week, I got to spend an afternoon with a dear friend I have known since childhood. Alecia (Buonocore) Elvstad graduated High School with me and we have been fortunate to get to see each other about once a year. I’m really irritated at myself however because we had such a wonderful visit that I failed to stop talking long enough to get my camera out so someone could snap a photo of us.

She brought me the cutest gift, that I can at least share photos of the bag and coasters with you. 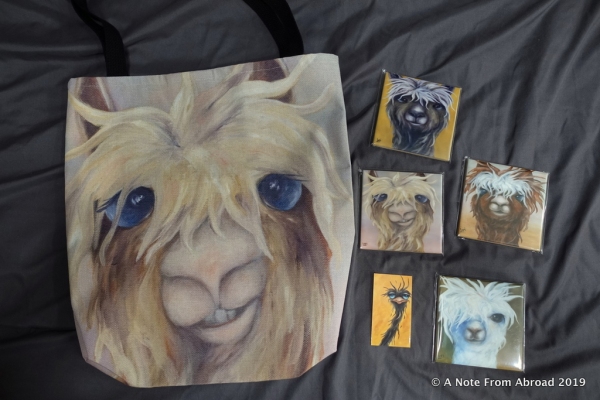 The artist. Lori Hill, is a good friend of Alecia’s. In case you are interested in some of her wonderful hand painted art, here is the contact information: 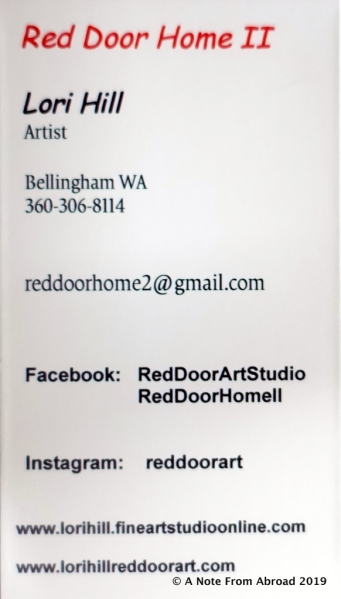 How to contact Lori Hill at Red Door Home II

Hi and welcome! We are Tim and Joanne Joseph and we have just embarked on our "next chapter". At a stage in life where traveling the world, taking pictures, and sharing our adventures with friends and family will be our dream come true.
View all posts by Tim and Joanne Joseph →
This entry was posted in California, United States and tagged Big White Dog, Chicken Killer, Legion, Lilac Oaks Campground, Photography, Road Trip, RVing, Travel, trip, vacation, Valley Center, Winery. Bookmark the permalink.