The Ibera Wetlands of Argentina

Departing Buenos Aires on the 8th, we caught a flight to Posadas and then had about an hour drive to Ituzaingo where we checked in to Cezeta Hotel. This is another quite basic style lodging. I am not overly impressed with the quality of some of the hotels that Intrepid chooses, but they do get high marks for location.

Concrete floor was quite dirty and I don’t think it had been swept or mopped in some time, but the bed was comfortable, sheets clean and we slept well.

With a late arrival, we all shared a meal of empanadas that Juani had picked up for us on our way to the hotel.

The next morning our group was picked up by our local guide, Sebastian, and drivers. We are split up into three separate 4-wheel drive vehicles to be able to navigate the roads that will take us into the Iberá Wetlands.

The Ibera Wetlands are located in the northern region of Argentina.

“Spanning more than 15,000 square kilometers, the Ibera wetlands are roughly the size of Belgium, which gives you an idea of how much there is to explore. The biodiversity is incredible, and the swamps, lakes and lagoons are home to such creatures as otter, alligators, deer, wolves and black howler monkeys, just to name a few.” ~ Intrepid Trip Notes

This is also a bird watchers paradise with over 350 local species! Anaconda, swamp deer, armadillo and rhea can also be found during certain times of the year.

Turning off the highway, we went down a sandy dirt road for about 30 minutes, passing through private lands.

With frequent stops to open and close gates along the way, we passed by herds of cattle, horses and the occasional sheep. This is baby season here in Argentina and I really enjoyed seeing how fertile the animals were, as babies of each species were in abundance. 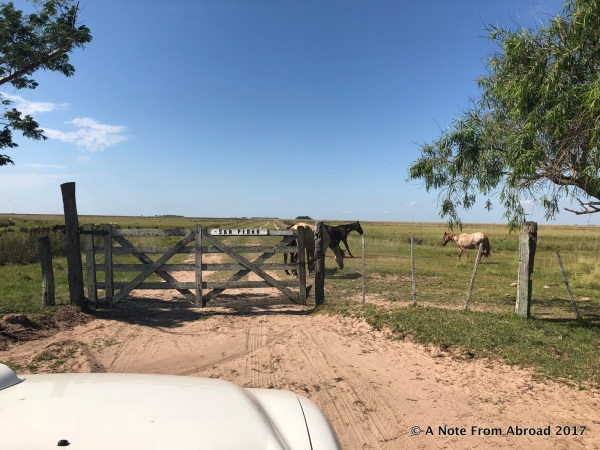 Each gate separated another farm

Pine trees are cultivated in this area as well. They reminded me of our Lodge Pole Pines with no lower branches. I’m not sure if these are the same variety, or just a distant cousin. Buckets are hung low on each trunk and the pine resin is collected.  Turpentine is one of the primary products that can be produced from pine resin. 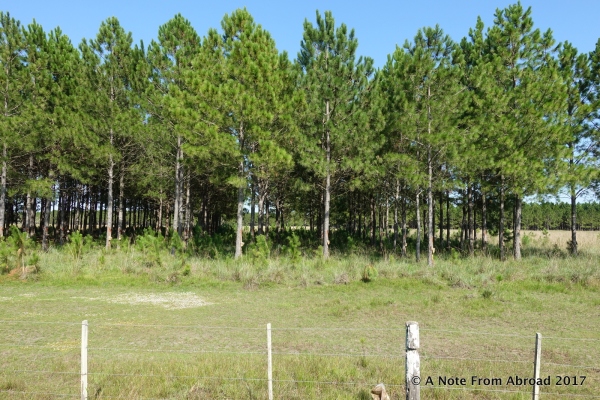 “Turpentine can be used as a solvent (a substance that dissolves other substances) and to produce varnish. It can also be mixed with beeswax to make a high quality furniture wax. Turpentine can be burned in oil lamps and can be mixed with ethanol to make “burning fluid”, an illuminate. Turpentine is mainly used today, once it has been processed, as synthetic pine oil. Pine oil is used for fragrance, flavoring, and in cleaning agents to give the “pine” odor. ~ tcpermaculture.com

Periodic photo stops were made so that we could inspect the ponds for creatures, take a closer look at the flowers, and simply admire the beauty of the area, which is a mixture of marshlands, lagoons and savannah grasslands.

So much to investigate…

Sebastian looking up names of birds and flowers for me

Eventually we made it to the National Park – Parque Nacional Ibera

Our first short walk was through some overhanging trees where we spotted a family of Howler monkeys. The lone black male dominated his harem and his territory. Many babies scampered overhead, sometimes dangling from their protective mother. We were warned not to stand right below them to prevent getting peed on.

A fabulous BBQ lunch was prepared by our drivers and we feasted well. 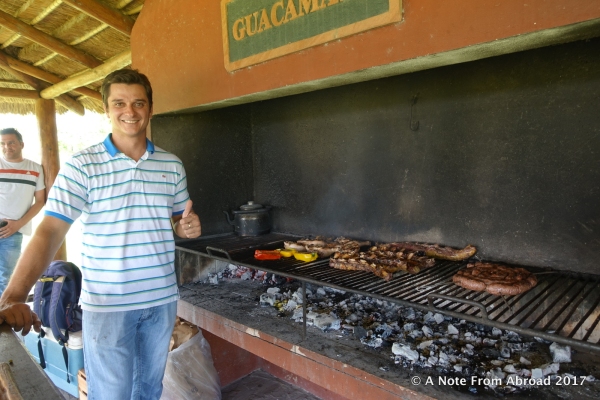 Food on the grill 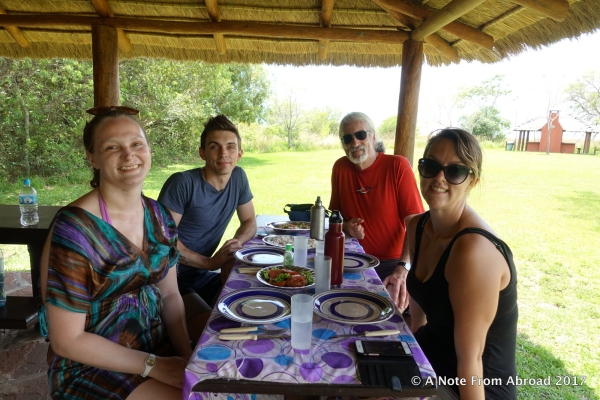 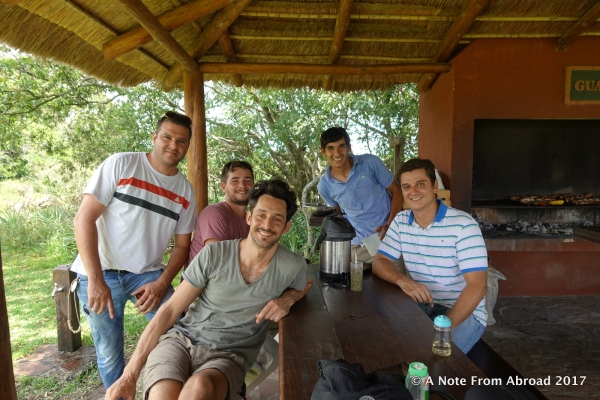 Our drivers and guides (Juani in front, Sebastian in solid blue shirt)

After lunch, our afternoon drive and walk-about allowed us to explore more of the park.

One of the most interesting animals we got to see was the capybara. 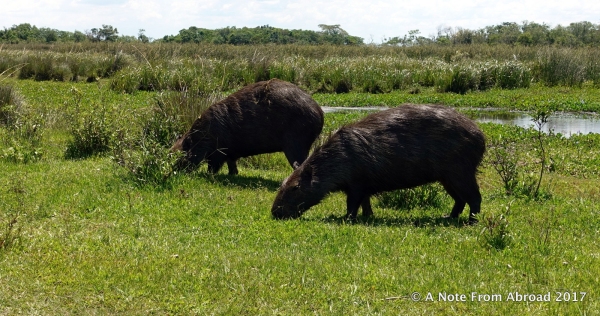 Also known as water hogs, it is the largest living rodent in the world, and can get close to 175 pounds (80 kg). They may look a little intimidating, but are in fact quite docile. We wandered amongst them, and took our fair share of pictures as they simply chose to ignore our presence.

Mommas with babies in tow were a little more reticent as you might expect. They can have large litters, up to a dozen or so babies at a time. The largest grouping I saw was eight little ones. 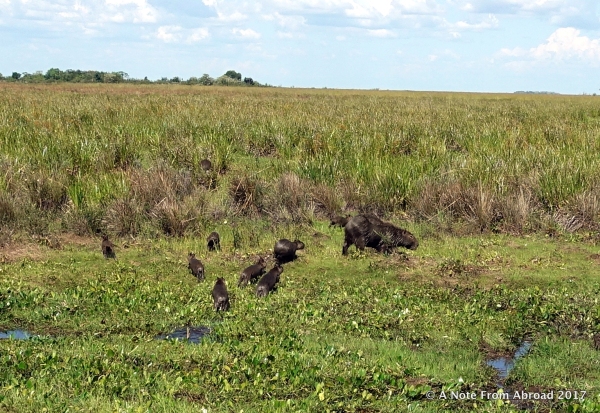 Sadly the babies make a tasty meal for the local alligators and some of the large predator birds. 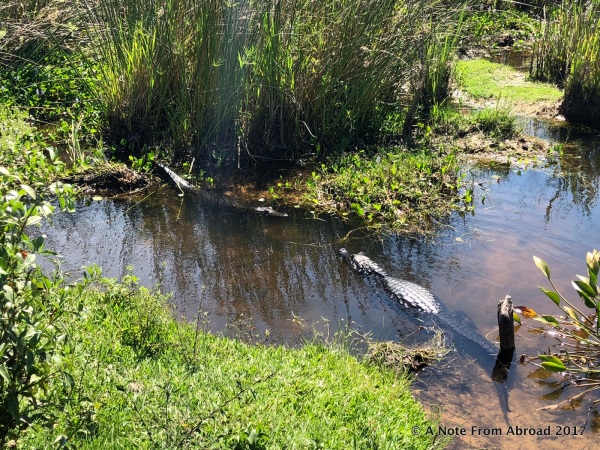 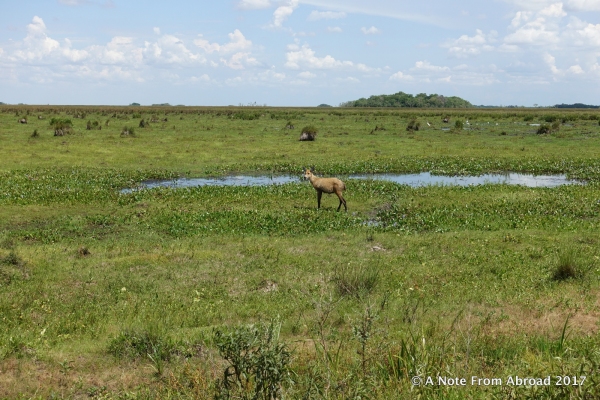 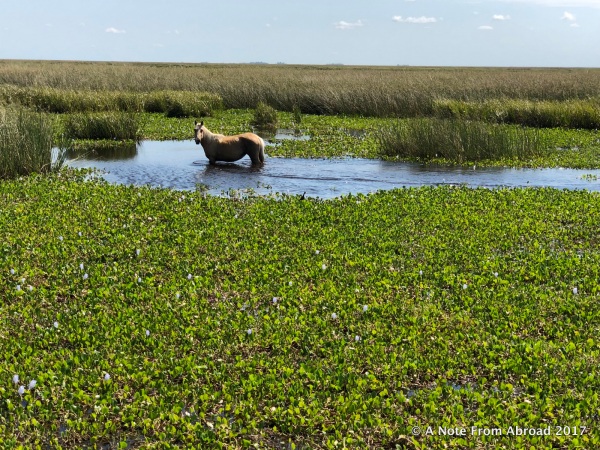 Horse in the water

Returning to the picnic area, we learned about the local custom of drinking Mate (pronounced maw.tay). For the Argentinians, this is both a cultural and social tradition, as common as sharing a cup of Starbucks back in the states.

Served in a cup (originally a calabash gourd bowl covered in cow hide), it is made from pouring hot water over chopped up herbal mate leaves (Ilex paraguariensis), and one drinks it through a shared metal straw that has a filter on the end of it.

After the cup is filled with the loose chopped leaves, the “server” puts their hand over the cup and shakes it several times to remove the powder residue. Then hot water is poured in on one side (perhaps 1/4 of a cups worth). Then the metal straw is inserted with the spoon-shaped filter end down into the water. The first couple mouthfuls are often spit out, as it is initially quite bitter.

The cup is then refilled with a similar amount of hot water and passed to the first person or guest who you are sharing with. It is common for several people to share the same straw/cup and no one seems the least concerned about sharing germs. While riding in the car, I was invited to join in, and I gladly accepted the honor of being asked to try it. 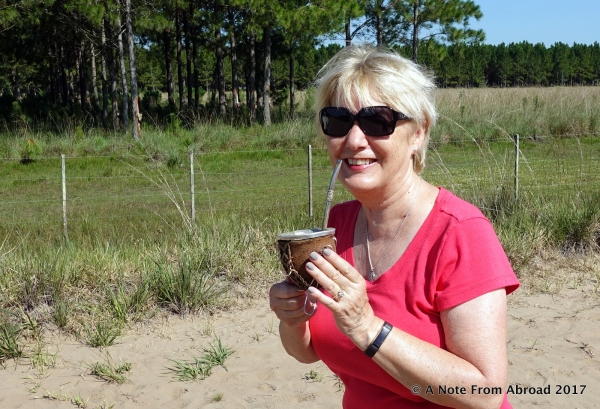 The drink was a little bitter with a strong herbal, grassy taste.

In fact we have already researched and found that it can easily be ordered on Amazon when we get home. It seems to act as a digestive aid, and it may have been my imagination, but it helped my reflux, if only for the day.

It is also very common to see people walking down the street carrying their Mate cup with a thermos of hot water under their arm.

Another fun activity was learning how to make tortas fritas (fried bread). Similar to Native American fry bread, a simple version is made with a mixture of flour, animal fat and/or butter, oil and water.

Rolling out the dough as Sebastian supervises to make tortas fritas

Cutting a hole in the center

The dough is mixed by hand, shaped into a flat circle and eventually rolled thin almost like a pie shell. We used an empty wine bottle as a rolling pin. The dough is then fried in oil, cut into wedges and served hot.

Juani also taught us how to play an active participation game, which I so wish we had taken a video of, as it stimulated the body and vocal chords with loud shouts, jabbing movements, fierce competition and much laughter. I have no idea the name of the game, but perhaps someday I will find out and can update this page.

I was the first one eliminated in our initial game. My performance ranked kind-of up there with my dancing skills, lol. But I did manage to hang in at least half way on the second round. 🙂

Even the insects were cute!

GRATITUDE MOMENT: Today I am grateful for such an interactive day, where we got to see the wetlands environment, spotted too many different birds to count, stand next to a capybara, watched howler monkeys as they watched us, sampled mate and shared in the ritual offering, crafted my own fry bread, observed caiman from a safe distance, and played a silly game, all enjoyed with our new friends. A full and fun day indeed!

NEXT STOP: Iguazu Falls, the largest waterfall complex in the world. We invite you to join us!

34 Responses to The Ibera Wetlands of Argentina