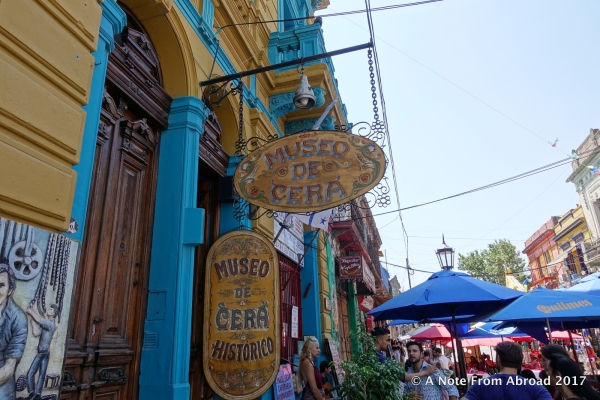 Getting off of the ship went smoothly. We caught a cab at the terminal and arrived at our hotel by 10:00. We had made the decision to book Two Hotel, which is where out Intrepid Tour is scheduled to meet on the evening of January 6th. It is a basic, inexpensive hotel that has seen better days, but we thought that not having the inconvenience of changing hotels might offset that.

Might not have been a wise choice, but we lived with it.

Checking in was a bit of a joke, as they did not have a room available for us until 3:30. Customer service and poor attitudes did not make us feel very welcome. The upside is that there was excellent, free WiFi in the lobby and I used the waiting time to upload a bunch of pictures and write-up several days worth of blog posts that I was then able to schedule.

When we finally got our key and went to our room, the bathroom had not been cleaned, and in fact was a pig sty, with huge wads of toilet paper in both the shower and all over the floor.

Nope, don’t think this room has been cleaned 😦

Returning to the desk, we showed them pictures, and they said, “Oh, I guess it was not ready”. No apology, but we did get a key for the room next door.

Our room at Two Hotel. Saggy mattress and stained, dirty bedcover, but we somehow survived 😦

Their hygiene standards here are at best, but we managed somehow. One of two elevators are broken, and the working one has not been cleaned in ages. The safe in our room did not work, and we had to get it fixed, plus a hair dryer from the desk. I could elaborate further, but I’ve already complained enough about the hotel.

Oh, did I mention that it is in a very good area as a base for exploring? Another check mark in the plus column…

The first adventure was to take the Hop On Hop Off style bus, called Buenos Aires Bus. It was actually a different company here, but same concept.

Walking three blocks to purchase our tickets, the posted sign at the bus stop indicated that busses came by every 20 minutes. We managed to watch a protest complete with enormous and loud drums and flags a flying, plus a lot of shouting we did not understand while passing the time.

After waiting 90 minutes, one of the busses came by. I tried to flag it down, but the driver only waved in some direction behind us and kept on going. Returning to the ticket office, we were told that was not normal, and suggested that we walk an additional three blocks to where all the busses start their route and try to get on there.

We headed off, and found three busses waiting. The weather was a cooker and would eventually reach 95 degrees by mid afternoon, but I was still determined that I wanted to sit up on top to allow for easier picture-taking. Besides the few seats downstairs were already occupied and had little to no views. The rough part was that the seats were plastic, had been sitting in the HOT sun for hours and even with putting several layers of paper on them, our buns were burning!

Driving throughout the town, we did see several of the places that we had been introduced to earlier on our ship tour, but also quite a few new ones. Within an hour my arms were turning red.

The real highlight of the day for me was the La Boca Caminito stop where we got off and spent a couple of hours having a meal, people watching, checking out the wares of small vendors and taking a bucket full of pictures.

Many of the early settlers to this neighborhood were of Italian descent, and it has maintained a European charm.

It was SOOOOOO colorful and our Italian waiter charming!

I know it is a definite tourist trap, but it was so fun to sit at a table, listen to local musicians, watch some tango dancers and try to take it all in.

And a few more shots:

Also at this stop is a bicycle tower display built from 1254 bikes, created by Ai Weiwei. 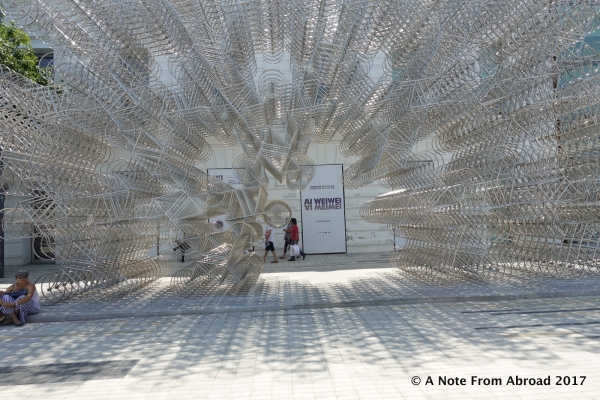 Another view from the side

And shot from our bus: 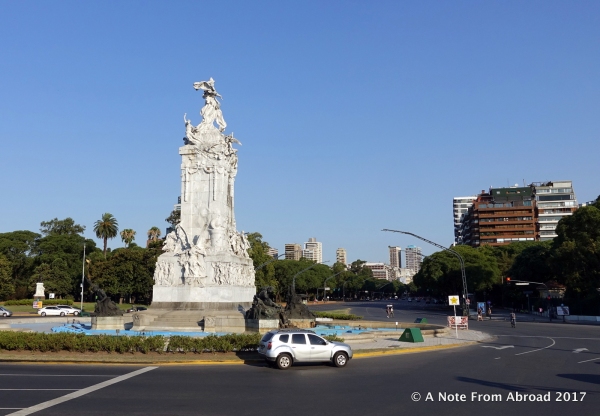 GRATITUDE MOMENT: We enjoyed a good dinner next door at the Intercontinental Hotel. I thought that their salad bar was fabulous, and after a challenging (at times anyway) day, it was nice to just relax and have a lighter meal. The charm and color of La Boca has made up for some of the disfunction we have experienced in other areas. Glad to have found a silver (and red, and blue, and yellow, and green) lining after all.

Hi and welcome! We are Tim and Joanne Joseph and we have just embarked on our latest adventure. We hope you will join us!
View all posts by Tim and Joanne Joseph →
This entry was posted in Argentina, South America and tagged Ai Weiwei, Argentina, Bike statue, Buenos Aires, Caminito, Congress Building, La Boca, Monumento de los españoles, Photography, South America, Travel, trip, Two Hotel, vacation. Bookmark the permalink.