Posted on January 6, 2018 by Tim and Joanne Joseph 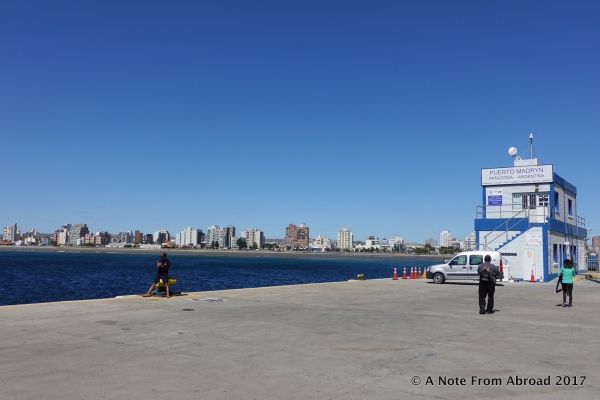 Puerto Madryn is another stop where seeing penguins was the number one billed attraction. But unlike other areas of Argentina that had been colonized by conquistadors, this settlement began with 150 colonists from Wales, England who were seeking religious freedom and a home to perpetuate the Welsh culture and language.

We had nothing booked for today, so took our time getting out and about. After walking along the boardwalk, having coffee in a small cafe, wandering about town and in a few random shops, hitting up an ATM for some Argentine Pesos, we decided to walk back to the ship.

While walking down the pier, we spotted some large white blobs under water that I mistakenly thought were large rocks. Then Tim saw them move. It turned out that when one came near the surface we discovered that they were the largest jelly fish we had ever seen, probably around four feet or more in length with a domed head perhaps 2.5 to 3 feet in diameter.

Jelly fish – these were the smaller ones

Other than that, nothing too exciting to report for today. Here are some shots we took in town:

Next to the boardwalk 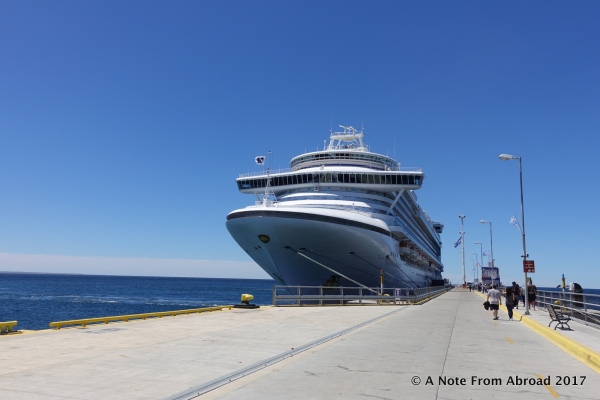 Bow of our ship

Back on board by mid afternoon, I was pleased to finally have some decent Internet connectivity which allowed me to upload some of the many pictures that were getting backlogged.

GRATITUDE MOMENT: Today I am grateful that I was not IN the water when we discovered that those white blobs were not rocks! I think I would have quickly tried to walk on water scrambling to get away otherwise 🙂

Hi and welcome! We are Tim and Joanne Joseph and we have just embarked on our latest adventure. We hope you will join us!
View all posts by Tim and Joanne Joseph →
This entry was posted in Argentina, South America and tagged Argentina, Cruise, Emerald Princess, Giant Jellyfish, Holiday at Sea, Photography, Princess Cruise, Puerto Madryn, South America, Travel, trip, vacation, Wales, Welsh Settlement. Bookmark the permalink.