I kind of left you hanging on whether or not we got our chosen campsite at our first stop-over in Canada. We all got up bright and early on the 27th. Karen and I left Chewing Black Bones at 7:00 in our tow vehicle, Jethro, to make a hasty one hour drive into Canada hoping we could get one of the non-reservation sites at Townsite RV Park and Campground.

Clearing the Canadian border was a snap. No line, friendly agent, and after answering a few simple questions including how long we planned on being in Canada, we were on our way through. We even received a small Canadian Flag pin.

Another plus to being in Canada in 2017, is that all of their National Parks are FREE!

We thought that perhaps that only applied to Canadian citizens, but much to our surprise and delight, entrance is free for everyone. We now have a green placard that is on the dash of our vehicles that allows us admittance to all of their parks until the end of the year.

Arriving just after 8:00 at the entrance to the RV Park, was a bit of a let down. The young lady on duty was not very encouraging and suggested that we proceed up the road to another campground, Crandell, which is on the Red Rock Parkway. But after driving through it the night before, we had our heart set on Townsite.

Our option? Waiting to see if anyone checked out and their site became available. She asked us to come back around 11:00 as they would know by then if anyone was not extending.

Not to be discouraged, and fearful that if we left, someone else might swoop in and get “our” spots, so we unloaded a couple of folding camp chairs out of the car and simple sat in them right in front of the office (off to the road of course) 🙂

Yes, we did get a few funny glances, a couple of people asked us if we worked here, and two even were brave enough to approach us and ask what in the world we were doing…

BUT, about 10:00 the young lady motioned us to the window, and let us know that she had two sites with electricity, and did we want them. HECK YEAH! We paid for three nights with an option to extend for up to fourteen. Oh my HAPPY, HAPPY, HAPPY.

The timing could not have been any better. Just as we were completing the paperwork, the guys turned the corner with the RV’s. They had already dumped, filled up, gotten fuel and propane, and were as excited as we were to have a place to park.

The weather was pleasantly warm, but the wind had kicked up, so we did not do much in the way of outside activities. Spent some time visiting, relaxing, cleaning and settling into our new digs.

We did stroll into town, and found that the walkway along the banks of the lake was tied off with yellow tape and marked as closed. There was a warning sign that a cougar was roaming around town, and that the tall grass gave it a place to hide, so we walked around the block.

It was a little unnerving, knowing that a large predator was potentially on the loose only a block from where you were camping. We were warned to walk in a group, parents to keep an close watch on their children and pets, and if we were to see it, DO NOT RUN. 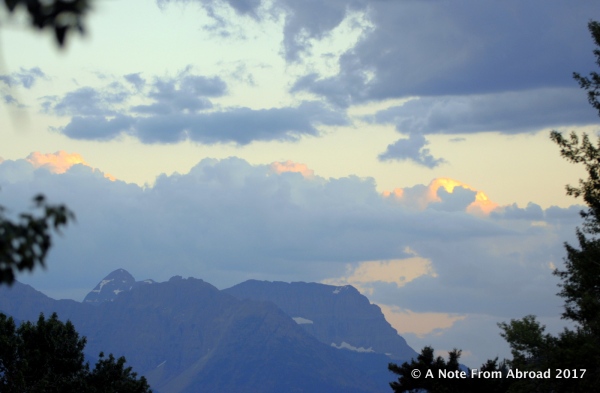 Time to get out for some sightseeing!

First of all the lake we are camped on, Upper Waterton Lake is wonderful and well utilized. We saw people swimming, fishing, stand up paddle board, floating on rafts, canoeing, lounging on the shore, sunbathing, and about every other non-motorized way to enjoy the water.

Hard to go wrong here if you love the water.

But our intent was to see the colorful Red Canyon which is about a 20 minute drive (depending how often you stop for photos), along the winding 8.7 mile long Red Rock Parkway.

At the end of the road is a large parking lot which provides plenty of parking for this popular destination. Actually there are multiple options available from here.

Along the Red Rock Parkway

We chose the easy Red Rock Canyon Loop first to get an overview of the canyon. The red rock is definitely colorful, but it is when it is wet down in and along side the creek where it turns down-right brilliant. 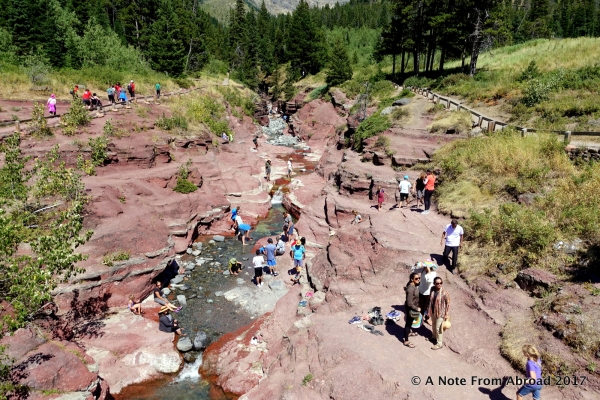 Taken from the middle bridge, looking into the Red Rock Canyon

You can see the loop trail on either side of the canyon in the picture above.

The rocks are the most beautiful where they are wet.

The upper bridge was closed, so after a brief walk, we did some more people watching before taking another trail from here toward Blakiston Falls.

Tim with Blakiston Falls behind him 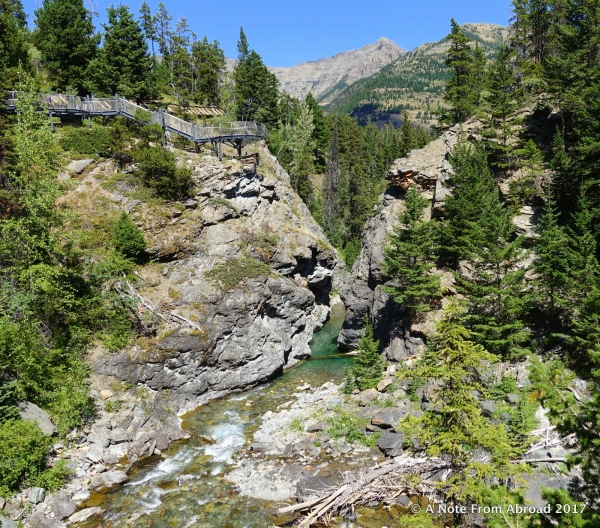 At Blakiston Falls with overlook platform

After enjoying the short, easy hike to the falls, returned to the Red Canyon area and watched as families climbed down into the canyon to walk up the stream which narrows the further you go. I very carefully made my way down the slope to keep myself upright. 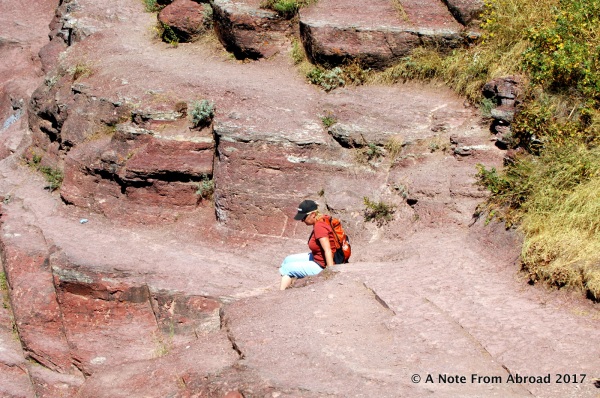 Being careful not to slip…

I had watched youngsters climb like a mountain goat up these walls. Oh, to be young and have good balance again…

I made it with my backpack, bones and dignity still in tact.

Karen and I spent some time simply soaking our feet in the cool water. An older fellow had informed Karen that if you place your feet in the water on the red rock that your body will absorb the minerals which he claimed to be restorative, and cure ailments ranging from headaches to skin irritations.

Soaking with our feet placed on the red rocks 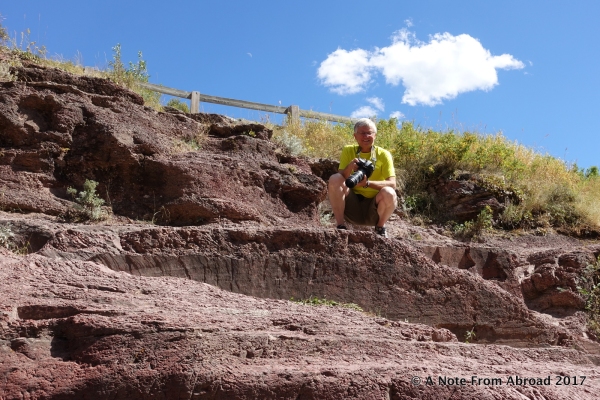 Tim had been shooting shots with his long lens, until I turned my camera on him

Then he decided to join us.

We made a short stop at Prince of Wales Hotel to check out their high tea and the view from there. Both looked pretty awesome!

View from the lounge during high tea

Walking out front to capture an outside shot. Not too shabby, huh?

This is the view from the hotel.

I also spotted this beautiful, but potentially deadly flowers in their garden. I wonder if they know it is poisonous.

Here is what I learned about this plant when searching, trying to identify it:

“Unfortunately, monkshood has a more sinister side, in fact, it is downright deadly! All parts of Aconitum, especially the roots, are full of an alkaloid called aconitine. Aconitine first stimulates and later paralyzes the nerves of pain, touch, and temperature if applied to any mucous membrane. Even abraded skin can absorb a dangerous dose of the compound and merely tasting some of the plant can and has proven fatal. Native Peoples have taken advantage of this poison for millennium. Juice from the roots was commonly utilized to poison arrow tips used for hunting and warfare.” ~ Dave’s Garden

It was very pretty, but I was surprised that a major hotel would have this plant where youngsters might inadvertently get ahold of it.

GRATITUDE MOMENT: Today I am grateful that we are sharing one more amazing place with our dear friends. If they had not raved about Waterton Lakes from their previous trip, I doubt we would have chosen to stop here as it is not as well-known as say Banff, Lake Louise, Calgary or Jasper National Park. I’m also grateful that our persistence paid off and that we got to stay at Townsite which was our first choice.