It is sweltering hot and TV stations are issuing High Heat warnings. Signs are posted everywhere reminding people to stay well hydrated. Initially we thought about just taking a “day off” and doing nothing, or perhaps a bit of laundry. But, after a few minutes of vegging, we threw that idea out the window, grabbed our water bottles, backpack, sunglasses, hats, sunscreen, and sense of humor and headed out.

Lunch in Moab was uneventful, and Tim guided our trusty car, Jethro, toward Canyonlands National Park.

You enter the park, driving along a mesa aptly named Island in the Sky. Along either side is a canyon – one created by the Green River and the other by the Colorado River. Each canyon is about half as wide and half as deep as the Grand Canyon and is still very impressive.

With temperatures in the high 90’s, we wanted to conserve our energy and carefully chose where we wanted to stop and where we were willing to do a bit of hiking.

First stop was a at the Green River Overlook. You could see for miles and miles and yes, the river is green. 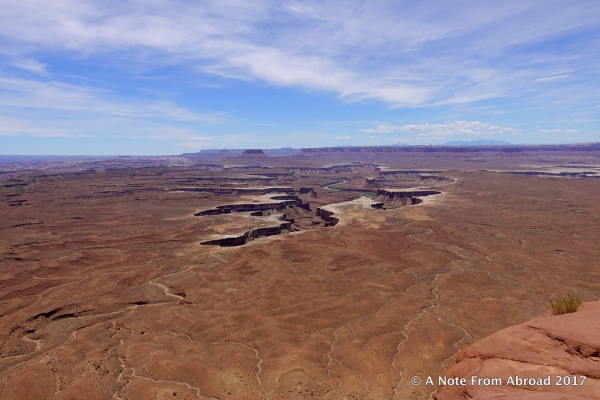 Then on to Grand View Lookout:

Also from Grand View. Nice trail off to the right.

But the highlight for us, and where we were willing to hike a bit to see, was Mesa Arch. Only a short, easy 1/2 mile, but in the extreme heat, we still took our time. 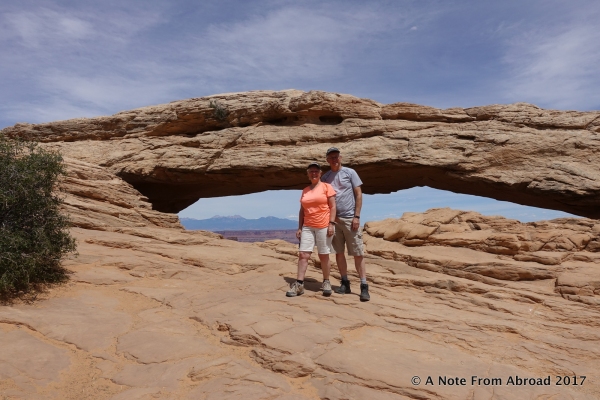 Tim and Joanne at Mesa Arch 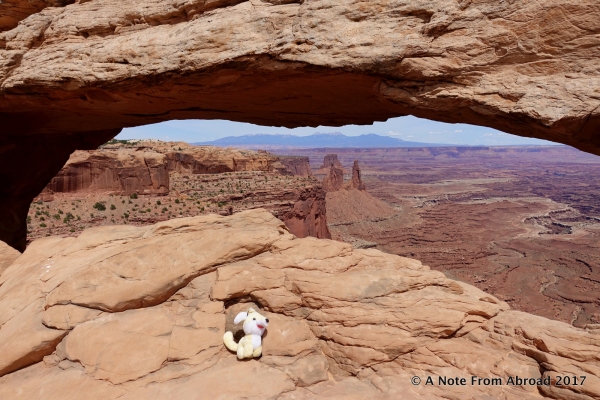 Gus got to enjoy the view as well

Tim can scramble over the rocks with ease

Shooting down into The Neck 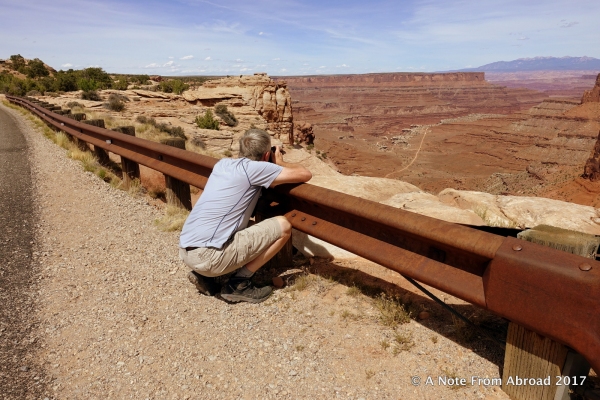 Next stop was only a short four mile detour off of the road back toward Moab and well worth the time. In fact, in some ways we enjoyed the views from Dead Horse Point even more than those at Canyonlands. 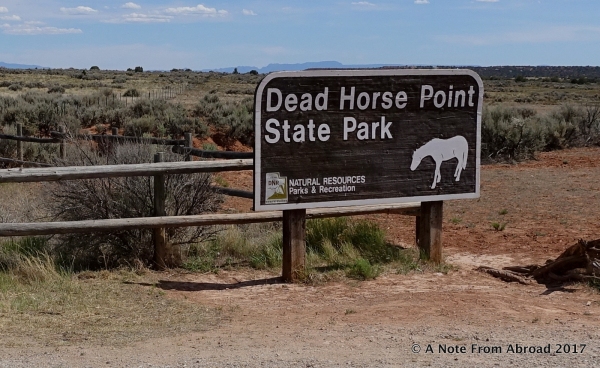 There is a sad story about how the park got its name. Evidently cowboys of the late 1800’s, chased wild mustangs onto Dead Horse Point and using the narrow neck to block off the their exit, creating a natural corral. After selecting the best horses that they wanted to keep, they left the remaining horses in the corral. Eventually the remaining horses died from lack of water, while overlooking the Colorado River 2000 feet below.

I would like to think that this story is wrong, and that no one would intentionally be that heartless and cruel toward an animal, or perhaps it has been embellished over the years.

In spite of the name and story the vistas are amazing.

Scrappy tree amongst the rocks

GRATITUDE MOMENT: Today I am grateful for the many rescue societies, groups and individuals who spend countless hours and funds, rescuing animals, getting them medical care, providing love, food and treatments needed, socializing them, and providing foster homes until their forever home can be found.

“We can judge the heart of a man, by his treatment of animals.” ~ Emmanual Kant