Mexico – Lunch with the Mennonites 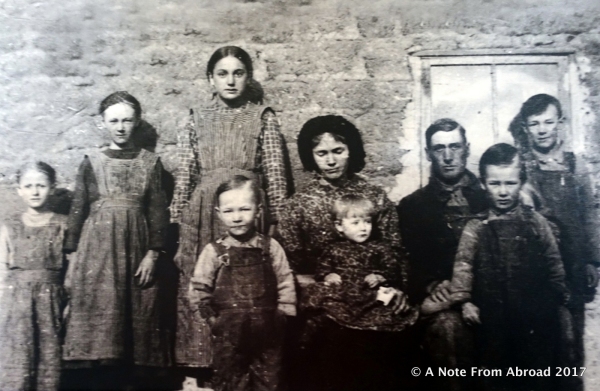 Family portraits for the Mennonites were rarely done

We knew we had another long day on the bus today and Manuel advised us that he would love to leave a bit earlier if possible. Our congenial group was all loaded and ready to depart 15 minutes before scheduled – pulling out at 7:45am.

It was wonderful seeing our driver, Francisco who we had left behind two days prior when we boarded the train. He had a big task of driving the LONG way around to pick us up.

The first part of the drive was very winding, and I felt sorry for Francisco having to manipulate our large bus over those roads. Those on the right side got some final views of the canyon as we creeped our way to a lower elevation. 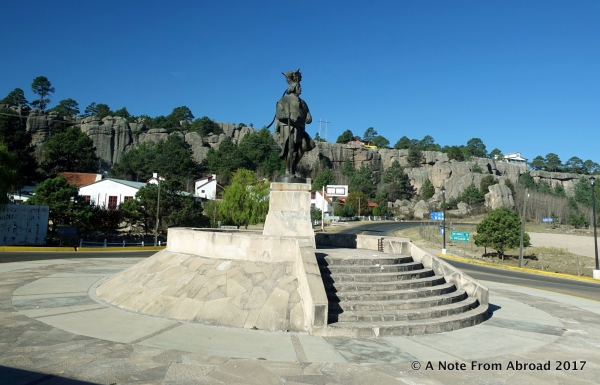 One of several statues we passed by in small towns

Finally the roads straightened out, but then the road construction and detours began. 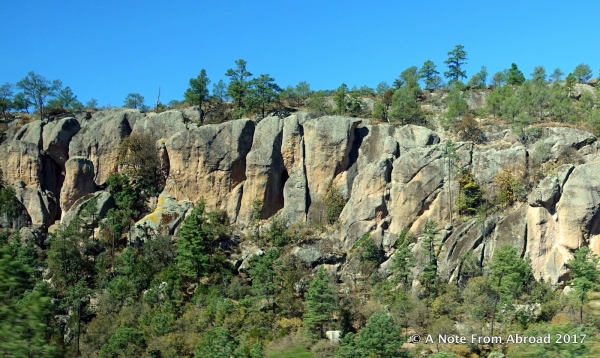 Many rock formations along the way

The scenery was pleasant as we passed huge rock formations, pasture land where cattle grazed, and rich farm land where crops such as wheat, corn or beans flourish. This is also apple country with acre after acre filled with trees just starting to blossom. According to our guide, the largest apple orchard in the world is in the area with over 1,000,000 trees. They have installed an extensive netting system to cover the trees to protect the fruit from getting bruised during hail storms.

A river flowed beside our road for a while

Getting ready to plant here

Our first stop was for lunch in Guerrero, where we enjoyed a visit to the Mennonite Museum and Cultural Center, followed by a typical Mennonite lunch.

I was especially interested to learn more about the Mennonites, as I had learned only a few years ago that my paternal grandparents were Mennonites. If this was ever discussed in my home when growing up, I have no recollection of it. It was only after both my grandparents and father were deceased that I found out.

“The Mennonites are Christian groups belonging to the church communities of Anabaptist denominations named after Menno Simons (1496–1561) of Friesland (which today is a province of the Netherlands)…Over the years, Mennonites have become known as one of the historic peace churches because of their commitment to pacifism.” ~ Wikipedia

I do remember that neither of my grandparents smoked, drank alcohol or cursed. They must have given up some of the pacifist beliefs however since my father and his two brothers all served in the US Military. My dad in the Navy, his oldest brother Bob, I believe was in the Army, and his other brother, Don was killed in Italy during WWII.

The Mennonites had originally split from the Catholic church. Different groups facing persecution, fled Europe and large colonies were established in Canada and the USA. After Canada would no longer allow this pacifist group to not serve in the military, they made a mass migration into Mexico where approximately 90,000 now reside in the state of Chihuahua.

Many of the items inside the museum/home were so familiar to me. But not from my grandparents home, but from Tim’s parents. He grew up in a farm community in Illinois, and I swear in several rooms he felt right at home.

Our lunch was simple and consisted of sliced sausage, cheese, a variety of breads and rolls with butter, plus a hearty soup that was warm and satisfying.

Then, traveling on to Nuevo Casas Grandes.

Manuel changed our itinerary around a bit on us, choosing to try to squeeze in our stop at the UNESCO site of Paquime. Originally planned for the following day, but with all of the road construction, as well as border crossing, he was concerned about fitting it all in. As it turned out, our visit there was way too rushed and I walked away frustrated and disappointed.

“…a visit to Mexico’s famous Archaeological Site of Paquime, undoubtedly the most important ruins in Northern Mexico, designated a UNESCO World Heritage Site. During the 14th to 15th centuries the city was a major trading center, before the Spanish conquest of Mexico. View the maze-like adobe remnants and the ceremonial mounds in a broad valley with panoramas to distant mountains. Walk by the House of the Cross, believed to be a temple and observatory, and the House of the Serpent, where animals were raised. The site’s impressive Museo de las Culturas del Norte displays important relics that tell the story of Paquime.” ~ Gate 1 Travel literature

I may do a separate post on Paquime and the Archaeological Museum at some point, but here are a couple of pictures to give a sampling.

Our afternoon rest stop was at a small market where the local Apple juice was recommended. I tried it and am so glad I did. It is the BEST apple juice I have ever had. I’m now trying to find out if it is sold anywhere in the USA. 100% apples and no sugar added.

If you like apple juice and have a chance to try this one, don’t pass it up!

Our farewell to Mexico dinner was in Nuevo Casas Grandes, in a private home where we were given an introduction to the beautiful Mata Ortiz Pottery, one of the finest and most innovative ceramics in the world.

The pots were painted by hand

Following dinner, three of the pots were auctioned off. I was interested in the large, round one shown below, but so was another tour member, Gerry, who eventually was the highest bidder.

We were out bid for this gorgeous pot

Two more that were auctioned

GRATITUDE MOMENT: Today I am grateful that I learned a bit more about the Mennonite faith and was able to tie it back to my ancestry.

Hi and welcome! We are Tim and Joanne Joseph and we have just embarked on our "next chapter". At a stage in life where traveling the world, taking pictures, and sharing our adventures with friends and family will be our dream come true.
View all posts by Tim and Joanne Joseph →
This entry was posted in Mexico and tagged Copper Canyon, Gate 1, Guerrero, Mata Ortiz, Mata Ortiz Pottery, Mennonite, Mexico, Museum, Nuevo Casas Grandes, Paquime, Photography, Pottery, Tour, Travel, trip, UNESCO, vacation. Bookmark the permalink.

35 Responses to Mexico – Lunch with the Mennonites