Our plans got thrown for a loop in two ways.

Challenge #1: Originally we had talked about heading north and revisiting Death Valley National Park to try to catch the desert in bloom. In the spring of 2005, we managed to hit the “100 year bloom” which was spectacular. With all of the rain California has had this past month, we thought that perhaps another great bloom might occur. Unfortunately Mother Nature had other plans and the bloom reports were not encouraging.

Solution: The reports were looking good that Anza-Borrego Desert State Park would have an abundant bloom, so that was chosen as our alternate destination.

Challenge #2: Ellie Mae, our new RV, needed a few minor repairs (things we had missed on our initial walk-thru). We had also decided to have solar panels and a stabilizer system installed while she was “in the shop”. Tim dropped her off at the dealership on February 15th with the list of repairs needed and instructions that we would be leaving on a road trip on March 7th. Further phone calls and follow-up emails were sent to confirm that the work could be completed so that we could pick her up on March 6th. When we again spoke with them on March 3rd, we were advised everything was completed except for one item where they were waiting on a part.

We again confirmed that we would pick her up on this past Monday. On March 4th, Tim called the service department to make sure that the missing part had arrived and we got a completely different answer – Ellie Mae had been taken apart for the repairs to be done, but NONE of the work had been started. They said they could hastily put her back together so we could take her, but then we would just have to bring her back again when we returned. Well, not wanting to have a last-minute rushed job of throwing her back together, we told them to please just get the work done as soon as possible – which of course meant no Ellie Mae for our trip to the desert. Insert my sad face here 😦

Solution: Well, we do have a car. So, mid morning on the 7th we loaded up the SUV and headed south-east from the San Fernando Valley.

Since we had been planning on sleeping in the RV, I had not made any reservations. Big challenge this time of the year. That first night, the hotels in Borrego Springs were sold out, unless we wanted to spend $500/night (we did not), so we continued on, through the park and found an $80 hotel in Westmorland, an hours drive away.

After a decent nights sleep and an acceptable dinner, we were ready for a fresh start!

On the way to the park and in the park we found quite a collection of metal sculptures. In fact, there are over 130 of them in the park alone that were done by the late Dennis Avery. The work is being continued today by ‘Perris Jurassic Park’ owner/artist/welder Ricardo Breceda based in Perris, California. The artworks include horses and artifacts from the wild west, prehistoric mammals and dinosaurs, historical characters, and a 350-foot-long serpent. 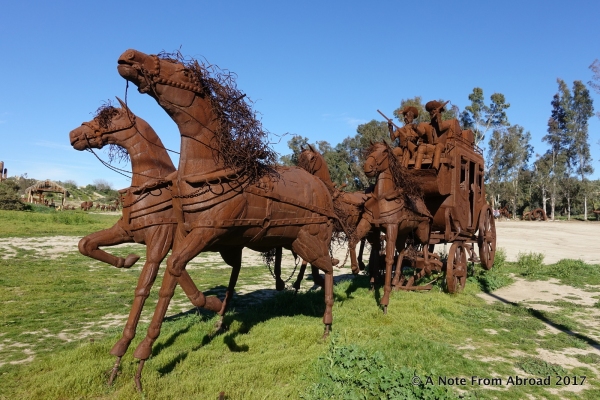 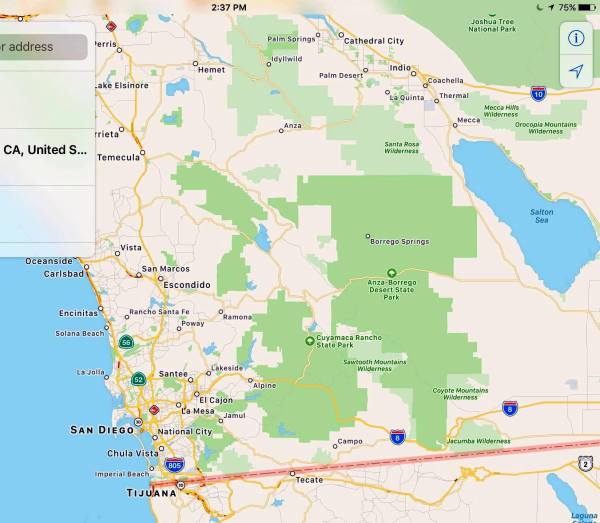 The park derives its name from explorer Juan Bautista de Anza and the big horn sheep found in the area. “Borrego” means sheep or lamb in Spanish, hence Anza-Borrego.

In the heart of the park, is the small town of Borrego Springs. Ideally, this is where you want to base yourself for a few days. We were able to grab two nights at the Borrego Springs Resort, Golf Club and Spa for the next two nights.

The place is a bit dated, but some renovations have improved the rooms. Our units included a living room, small kitchen area complete with refrigerator and microwave, roomy bathroom and comfortable bedroom – except for the bedbugs, which we found in TWO different rooms. And all of this for a bargain (choke, choke) $248/night including the mandatory resort fees.

The on site restaurant had some potential but left us scratching our heads at the presented meal. Ordering sea bass, the fish was well prepared, but served up on a bed of cooked frozen peas and corn and topped with a handful of undressed mixed greens. Just did not get either of us excited.

Visitor’s Center: Located in town is the park visitor’s center and a great place to begin your adventure. The knowledgeable staff will provide you with a brochure that includes several maps of the park, recommendations on places to see based on your goals, and other information booklets covering certain trails as well as how to identify the local flora and fauna.

They have a short 15-20 minute film that shows the park in all four seasons which we enjoyed.

Sample of literature from the Visitor’s Center

There is also a .7 concrete walkway at the Visitor’s Center which will give you an introduction to the common plants and animals found in the park.

Our first goal was to see some of the desert blooms. Two places were highly recommended and marked on the map above and we headed out. Where the pavement ends at the north end of DiGiorgio Road, which is also the entrance for exploring Coyote Canyon, we found quite a few cars … and flowers. 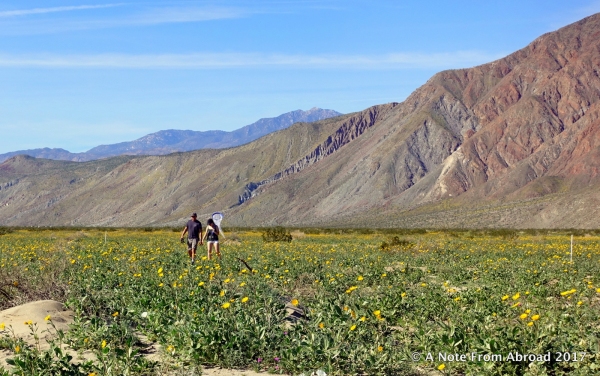 Just some of the flowers we saw would include the Desert Lily, Dune Evening Primrose, Arizona Lupine, Sand Verbena and the Desert Sunflower.

Then on to the see the sunset from Fonts Point. Four wheel drive is recommended for off-road jaunts, but we had no problems taking the four mile long dirt road in our Lexus SUV which has all-wheel drive. The sand road can be tricky, but staying in the roadway path was doable.

The road to Fonts Point

Along the road toward Fonts Point

The views from Fonts Point are pretty spectacular. From up high you look down into the Borrego Badlands. In fact you have an amazing 360 degree view! 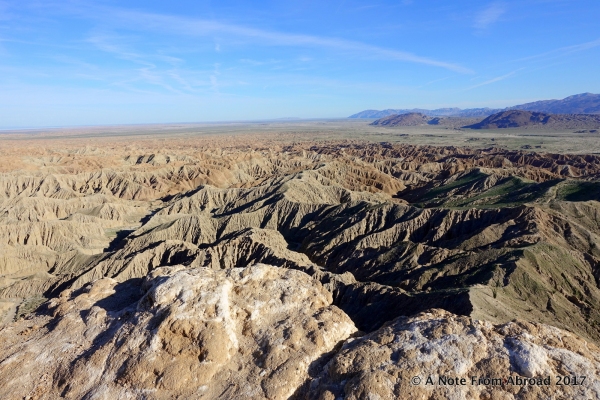 The Borrego Badlands to the west

And as the sun dipped further, we were joined by about 20 others. Some snapped away, others enjoyed a beer, sat on a chair or rock and simply soaked up the experience.

I must confess it made me a little nervous seeing this young couple sitting on the very edge. We old fogies kept a wider margin.

Tim soaking up the late sunshine with the Badlands behind him 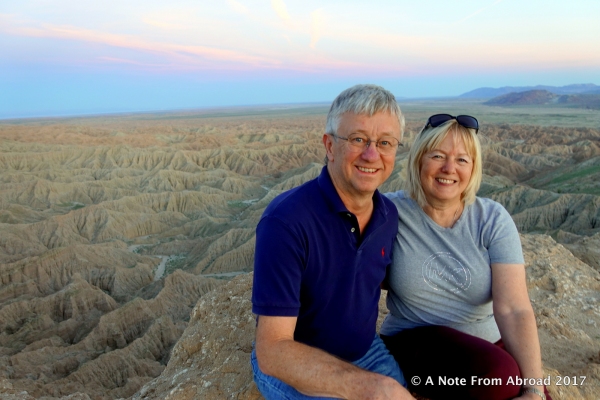 What a spectacular ending to a fun day…

GRATITUDE MOMENT: Today I am grateful for flexibility. We are so fortunate to have the time and willingness to come up with alternate plans when thrown a curve ball. And it worked out just the way it was supposed to. In reality, we could not have taken this off-road adventure in Ellie Mae. So, by not fighting the situation, and by staying open to the possibilities, we ended up with a silver lining.

STAY TUNED FOR ANZA-BORREGO PART 2, (coming soon) which includes our hike down into The Slot…

Hi and welcome! We are Tim and Joanne Joseph and we have just embarked on our latest adventure. We hope you will join us!
View all posts by Tim and Joanne Joseph →
This entry was posted in California, United States and tagged Anza, Anza-Borrego, Blooming, Blooms, Borrega Springs, Borrego, Cactus, California, Coyote Canyon, Desert, Flowers, Fonts Point, Photography, Slots, State Park, Travel. Bookmark the permalink.