As is often the case, our travel plans are fluid. While driving toward Tucson, I spotted a billboard touting Biosphere 2. I remember reading a small blurb about it years ago and was curious to check it out. So, after a short stop to recalibrate our GPS destination, off we went in that direction.

Built over four years from 1987 – 1991, it is the largest closed system every created. It was built to be a sealed, self-contained environment, and a closed ecological system or vivarium.

Constructed on a 40 acre site, the complex itself is 3.14 acres and was intended to be a center for research and learning about the Earth and its living systems. It was also hoped that it would provide answers on how mankind might someday colonize the moon, mars or faraway planets.

The initial experiment would include eight people being enclosed for a period of two years. The were to have no physical contact with the outside world, but be self-sufficient inside the domed units, growing their own food, and doing research projects.

The Biosphere itself was divided into distinct zones that included a simulated rainforest, ocean with coral reef, fog desert, mangrove wetlands and a savannah grassland, so that data could be gathered on the effects of a closed environment on each section and each other.

There was also a large agricultural area where crops were grown. They were on a 90 some percent vegetarian diet, but chickens were raised for eggs, goats for milk, and tilapia for fish and pigs for some occasional meat.

The eight team members took turns cooking, with one person being assigned to fix dinner, then breakfast and lunch the following day before the next person took over.

Kitchen – quite modern for the time

There were four men and four women that included one doctor. There were no couples initially, but they were free to form whatever relationships they wanted. They were forbidden to produce any children during their two-year contract as that was one potential complication they did not want to add to the equation.

Each person had their own small apartment with living quarter below and sleeping quarter above.

They had access to telephones, computers and TV to stay in touch with the outside world and friends or family could come to a viewing area at the entrance where they could visit via telephone and “see” each other through a large window. Reminded me a bit of what it might be like to visit someone in prison.

There were some problems with the first mission that included animals and plants dying, management issues, constant hunger, infighting, harder work than they anticipated and not getting enough calories on a daily basis they each lost 20-25 pounds.

Tim inside the Biosphere

But the biggest challenge became a dwindling oxygen supply. Although the scientist had carefully calculated and they thought balanced the internal composition with the number/amount of plants to convert the carbon dioxide back into oxygen, they failed to take something into consideration…

They entire building was built on top of a huge concrete pad. Concrete can take years to cure, and that process sucks up oxygen. Since it was a totally sealed enclosure, the concrete was stealing oxygen needed for the eight inhabitants to breath.

This is inside the “lungs” of the enclosure

The doctor did physicals for each member every two weeks, and as the oxygen levels decreased, it eventually became problematic. Symptoms became apparent like one might see at higher altitudes. A decision was made to artificially insert more oxygen on three different occasions.

The second mission in 1994 was with seven members and lasted only six months.

Today Biosphere 2 is owned by the University of Arizona and is both a tourist attraction and a research facility.

This display seemed out-of-place to me???

I walked away scratching my head. It was fascinating, but I felt saddened that the original project was more failure than success. There was a huge opportunity that got squandered, I believe primarily due to poor management.

Just FYI, one “couple” did end up getting married at the end of the contract and are still married and living in the area. 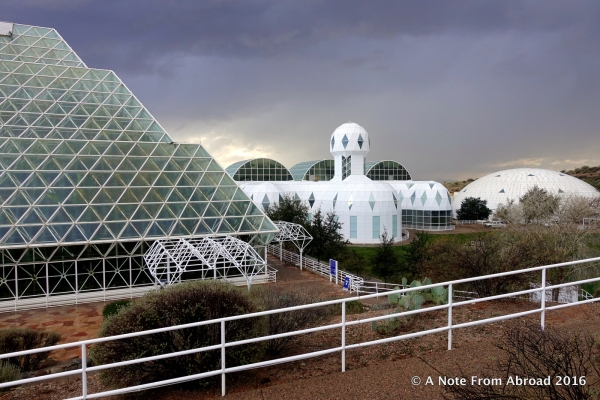 The sky was threatening, yet beautiful as we were leaving

The picture above shows the rainforest in the glass building on the left. The center white area with the lookout tower in the center is the living portion where the apartments and kitchen are located. Behind it in those three arched greenhouses is where the majority of the food was grown. All the way to the right is the large domed lung portion.

Was it worth seeing? Most definitely. We were fortunate to arrive on a Saturday just before a one hour history tour was starting, so we got to take it and then go on the 90 minute regular tour.

Some of the displays, particularly of the different environments, are decaying and neglected looking, however the overall structure and information behind the project is still fascinating.

The portion, where the three domed greenhouses are, has been repurposed and will soon be used for a brand new experiment: Landscape Evolution Observatory  I am hopeful that this massive site can be used for similar scientific projects in the future.

GRATITUDE MOMENT: Today I am grateful that we got to visit what had once been billed by Time Life Books as one of the 50 must-see wonders of the world. I’m guessing this was back in the day when the experiments were actually taking place.