Galapagos Islands ~ From disillusion to wonderment all in a single day

Arrival at the airport in Batra

Day 1 – Getting off of the airplane I was already wondering where I was and what had happened. This surely was not the Island paradise I had envisioned. In fact far from it. Can’t say why I had envisioned lush and tropical, but the reality was hot, humid, arid, volcanic rock, cactus, and not much else. Had we taken a wrong turn and landed in the wrong place?

The ground team that met us at the airport was well-organized and we were smoothly passed off to other smiling representatives who grabbed our checked luggage, loaded it onto a truck, and advised us that our bus would be along shortly to take us to our ship, the Santa Cruz II. That allowed us time to chat with a few other passengers while we waited, including a couple from Australia. I think we may have a diversified group.

A short five-minute bus ride brings us to the small dock where life vests are passed out and we are loaded into small zodiac style boats called a panga. It actually took longer from the dock to the ship, than from the airport to the dock.

At the dock upon arrival in the Galapagos Islands

Check in on board was quick and painless. After handing in our cruise document, we were shown to our cabin which happened to be right next to the main reception area. At least we did not have far to walk…

The cabin is clean, informal, moderately basic, but roomier than some cruise cabins we have occupied in the past. Twin beds with a night stand between them, a tiny corner desk, one chair, and a small closet that contains a safe completes the room. The bathroom has a shower that is actually larger than our one at our shop so I am happy.

The bathroom in our cabin

Interestingly there are no keys for the cabin. We can lock it from the inside at night, but during the rest of the time, all cabins remain unlocked. I was slightly uncomfortable with that initially, but after locking our passports and some cash in the safe, I soon accepted that it was actually refreshing to be on an honor system, trusting everyone as we are literally all in the same boat, pun intended.

Almost immediately we are invited to attend a welcome briefing. The Galapagos Islands are a protected National Park, and some strict rules must be followed to protect the native animals and vegetation.

There are 10 rules, but the main ones we are to follow include:

There is a small gift shop on board also operated on the honor system where you choose what you want or need, write down the item description, price and your cabin number and off you go. The item amount will be added to your account to be settled I’m assuming on the last day before we disembark.

Rica and Fred are in a cabin right next door. The walls are thin, and when the ship is not moving one can hear muffled conversations. Tim and I remind each other to keep our voices down. Hoping we don’t forget too often.

After a bountiful buffet lunch, we had a brief orientation meeting. Our ship has 50 cabins and can accommodate 90 passengers. This is not prime season, so there are only 51 passengers on board. Announcements are given in Spanish, English and German. We have been divided up into four groups, each with a naturalist guide. The four of us are placed in the Albatross group, and our guide is Roberto.

There are actually four different ships that are each doing different itineraries. We are on the “Western Galapagos” six day/five night journey. The airport and departure point is from Baltra Island, but we will be visiting North Seymour Island, Isabela Island, Fernandina Island, Santa Cruz Island and Floreana Island before returning to Baltra for our next flight. I had not realized that different itineraries were offered and that some of the “Big 15” creatures would not be found on every island.

And what are the Big Fifteen you might want to know?

The goal is to see as many of these as possible, similar to a trip to Africa to find the Big 5.

The afternoon excursion was to North Seymour Island. After the boat is anchored, all passengers are instructed to meet in the library. Already informed to bring hat, camera, good hiking shoes, water bottle (provided by the ship), wear sun block and bug spray, and bring your panta life jacket (as opposed to the emergency life vest that remains in the cabin except for our safety drill and in case of an actual emergency). When our group is called, we proceeded to the back of the ship to load once again on the panga boats to go ashore.

Just FYI, we are told ahead of time at each stop if it will be a dry or wet landing. This first stop was to be a dry landing. The experienced guides and panga crew are well versed in helping each of us on and off the small boats. Double grips, where you grab each other by the wrist and then are passed on to the next out stretched hand where this maneuver is duplicated with the other hand results in secure and confident embark/disembark maneuvering each time.

North Seymour was also rather bleak, yet beautiful. It is not the rainy season, which is a plus for us with bright blue skies and weather in the high 70’s to low 80’s. The downside is there are zero leaves on the short trees which makes things even more stark. There are a few cactus here and there, but not many.

And then we start seeing a few birds, and then more birds, and then iguanas, and we perk up as the landscape that once seemed barren and desolate starts to come to life.

Our excellent guide, Roberto, informs us about each of the critters we come across. He is so knowledgable and quite obviously loves his chosen profession and the animals. 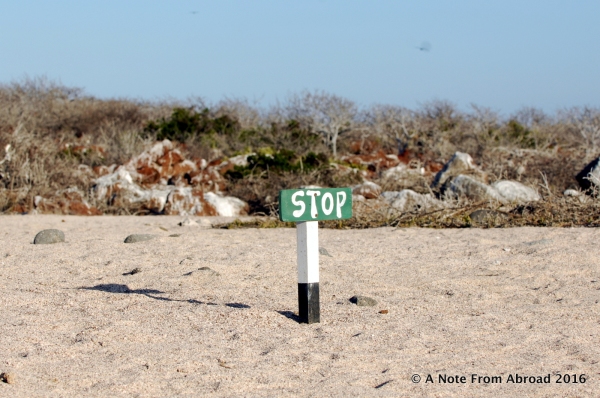 Pathways and boundaries are clearly marked

How we marveled at each new encounter. They have NO FEAR of us and although we had been asked to keep a six-foot boundary, the birds and animals simply went about their business as if we were just another animal passing by. Granted there were quite a few clicking noises coming from our direction as each of us took numerous pictures, but other wise they were mostly left in peace.

Please allow me to now introduce you to the critters we met on our first afternoon here: 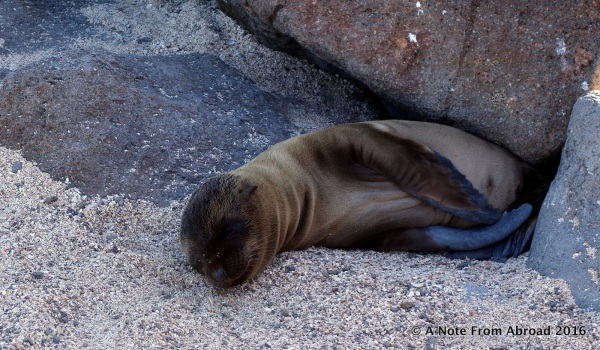 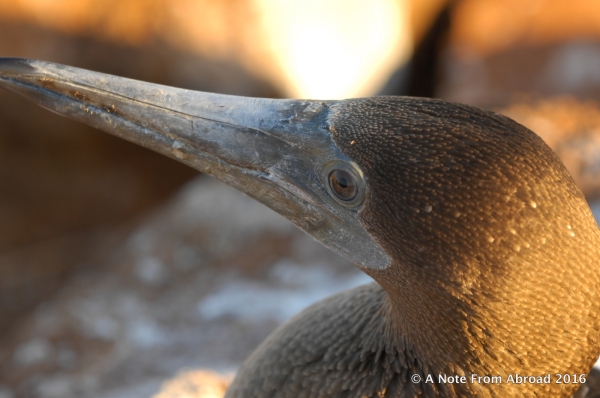 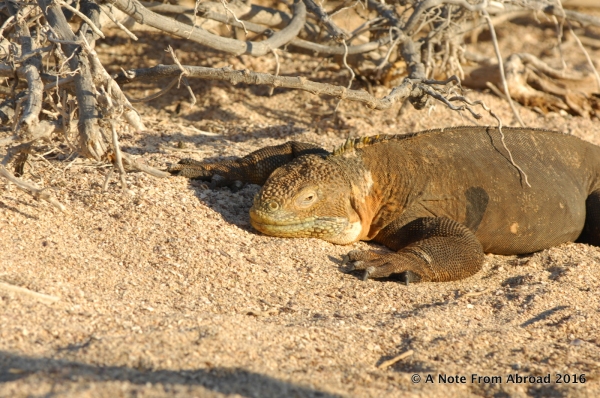 Male frigate bird on the right 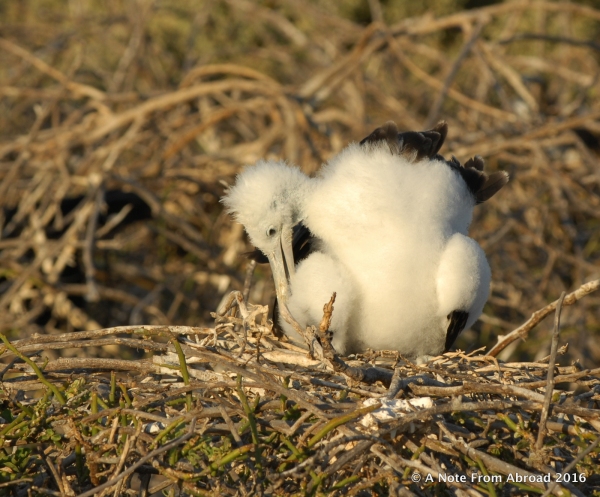 And just a few random shots:

Returning to the ship at sundown, we had our mandatory nautical safety drill then off to a wonderful dinner.

All ready for our evening safety drill

How first impressions can be deceiving. From what initially appeared to be a barren wasteland, is now seen through more enlightened and educated eyes. Not only am I learning, I am growing more and more excited to see what is around each corner. Most of these amazing creatures can be found nowhere else on earth. They have adapted, evolved and now thrive with few natural enemies.

Life is everywhere and living in harmony with each other. Wouldn’t it be wonderful if this same principle were adopted throughout the world…

GRATITUDE MOMENT: Today I am grateful to have arrived in the Galapagos Islands, a long-time item on my proverbial bucket list. I am also thankful for excellent guides who are slowly introducing us to this sheltered corner of our planet. They are slowly peeling back the covers, a little at a time to reveal all the hidden treasures and magic that is the Galapagos.

Hi and welcome! We are Tim and Joanne Joseph and we have just embarked on our latest adventure. We hope you will join us!
View all posts by Tim and Joanne Joseph →
This entry was posted in Ecuador, South America and tagged Amazon, Andes, Archipelago, blue-footed boobies, Ecuador, Frigate birds, Galapagos, Gate 1, Islands, M/V Santa Cruz, marine iguanas, North Seymour Island, Photography, Travel, trip, vacation. Bookmark the permalink.