Speyer, Germany ~ A UNESCO Cathedral, 1500 Liters of Wine and a Charter for the Jews

EDITORS NOTE: After a several week hiatus, that included a bit of time with family and friends, a cold that put me down for a while and a fabulous jaunt to my home town of Medford, Oregon, where I reconnected with several dear and long-time friends, I am finally ready to complete the write-ups from the last 8 days of our recent Uniworld River Cruise along the Rhine and Moselle Rivers. 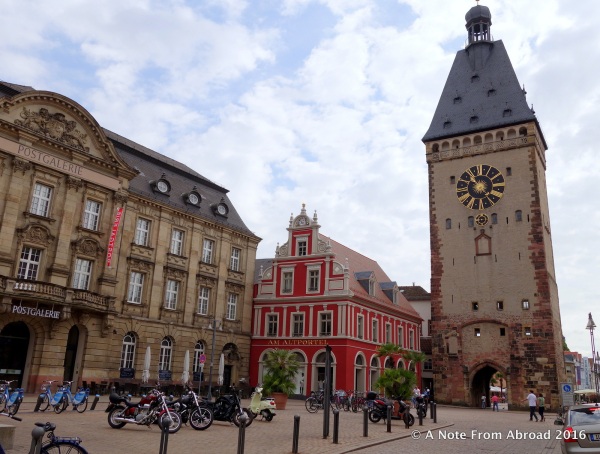 Speyer, Germany with the Old Gate

Because of a shortage of docking facilities, we moored in Mannheim and were bussed to our scheduled stop in Speyer.

Today was filled to the brim, starting with a walking tour through Old Town Speyer (Spire in English). Our local guide brought us to the UNESCO-designated Romanesque Cathedral, but could not take us inside, so we ventured in on our own. 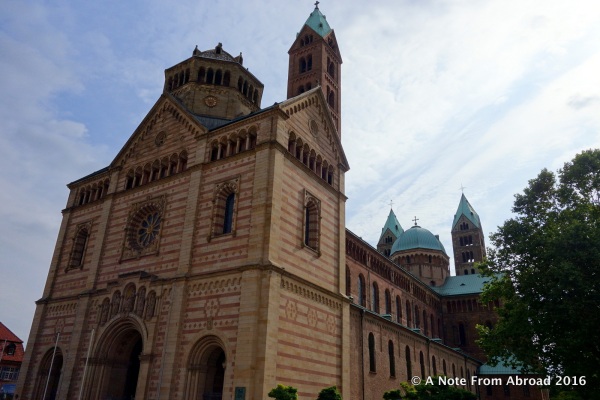 Founded in 1030, the triple-aisled basilica is made of red sandstone. It influenced how churches and cathedrals were built for the next two hundred years and is considered to be a turning point in European architecture. It is the largest Romanesque church still standing today and the burial-place of eight emperors and kings.

“(It is) one of the most important architectural monuments of its time and one of the finest Romanesque monuments.” ~ Wikipedia 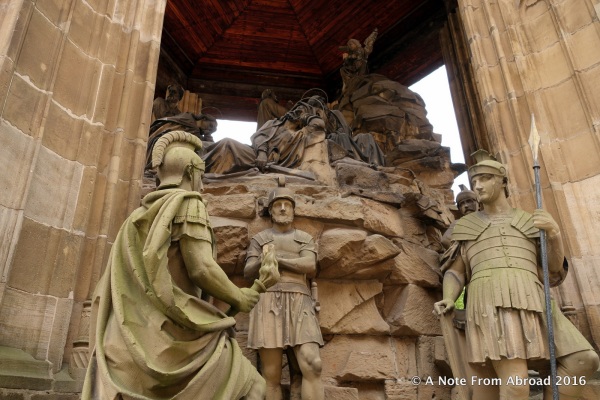 Next to the Cathedral – The Mount of Olives Sculpture

“In the square at the western end of the cathedral is a large bowl known as Domnapf  (cathedral bowl). It formerly marked the boundary between the episcopal and municipal territories. Each new bishop on his election had to fill the bowl with wine, while the burghers emptied it to his health.” ~ Wikipedia

The bowl holds 1500 liters of wine! The most recent time it was filled was for the 950-year anniversary of the dedication of the Cathedral of Speyer on October 2, 2011.

And for my friends who have walked “The Camino”, this is also along “The Way” to get to Santiago…

Found amongst the bricks, right in front of the large Cathedral Bowl

One of the most significant Jewish communities within the Holy Roman Empire can be traced back to Speyer from over 1,000 years ago. Back in 1084, while fleeing from persecution, several Jewish families settled in Speyer, with the full blessing of the local Bishop and approval of the Emperor, Henry IV. In his “charter” for the Jews, Bishop Rüdiger Huzmann wrote:

“… in my endeavor to turn the village of Speyer into a city, believed to multiply its image a thousand times by also inviting Jews. I had them settle outside the quarters of the other inhabitants and as not to have them disquieted by the insolence of the lowly folk I had them surrounded by a wall.”

He went on to write about where they would live, and under what conditions (paying taxes), and the right to buy and sell:

“Now the place of their habitation which I acquired justly (for in the first place I obtained the hill partly with money and partly by exchange, while I received the valley by way of gift from some heirs) that place, I say, I transferred to them on condition that they pay annually 3 ½ pounds in silver for the use of the brethren. I have granted also to them within the district where they dwell, and from that district outside the town as far as the harbour, and within the harbour itself, full power to change gold and silver, and to buy and sell what they please.”

Flower in the Jewish Courtyard

They are given other rights, such as land for a cemetery, and freedom to mediate cases within their own community.

“And I have also given them license to do this throughout the state. Besides this I have given them land of the church for a cemetery with rights of inheritance. This also I have added that if any Jew should at any time stay with them he shall pay no thelony [toll or fee]. Then also just as the judge of the city hears cases between citizens, so the chief rabbi shall hear cases which arise between the Jews or against them. But if by chance he is unable to decide any of them they shall go to the bishop or his chamberlain.”

The charter granted by bishop Huzmann went well beyond contemporary practice anywhere else in the empire. The Jews of Speyer were allowed to carry out any kind of trade, exchange gold and money, own land, have their own laws, justice system and administration, employ non-Jews as servants, and were not required to pay tolls or duties at the city’s borders.

“They shall maintain watches, guards, and fortifications about their district, the guards in common with our vassals. They may lawfully employ nurses and servants from among our people. Slaughtered meat which they may not eat according to their law they may lawfully sell to Christians, and Christians may lawfully buy it. Finally, to round out these concessions, I have granted that they may enjoy the same privileges as the Jews in any other city of Germany. Lest any of my successors diminish this gift and concession, or constrain them to pay greater taxes, alleging that they have usurped these privileges, and have no episcopal warrant for them, I have left this charter as a suitable testimony of the said grant. And that this may never be forgotten, I have signed it, and confirmed it with my seal as may be seen below. Given on September 15, 1084.” ~ Wikipedia

In 1104 a new synagogue and Judenhof (Jewish courtyard) was consecrated in the center of their community. It contained a mikvah (pool for ritual baths) which still stands today. The ruins represent the oldest remnants of a mikvah in central Europe. The pool is still filled by groundwater and it is considered an archaeological heritage site. 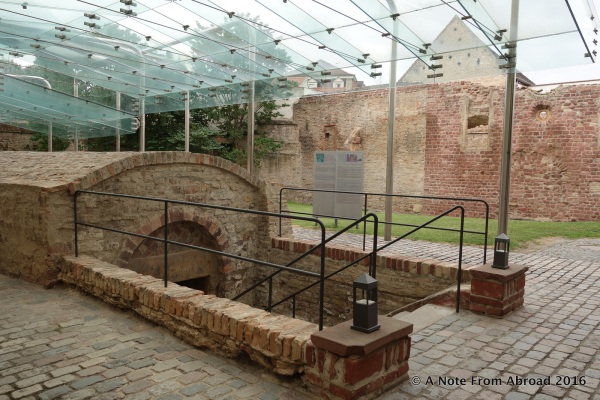 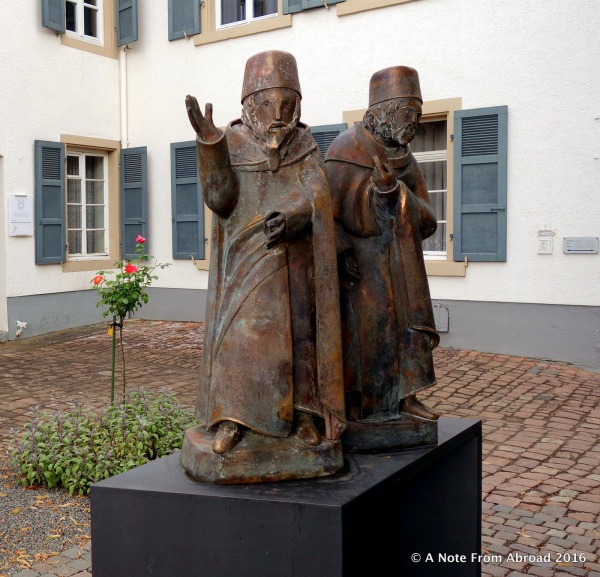 Statue in the Jewish courtyard

The Altpoertel is one of the original 68 towers in the old walls and gates. At 180 feet tall, it is the largest city gate remaining in Germany.

During the War of the Grand Alliance, back in 1689, the tower narrowly survived. Explosives had been placed in the tower by French troops, but before they could be detonated, the Carmelite community knelt in front of the troops pleading for the tower to be spared, claiming that the collapse would endanger the monastery. Seeing that the monastery had been taken over by Marshal Duras, and become his headquarters, the Marshal commanded the Carmelites to rise and cancelled the destruction of the tower.

And although the Old Gate was saved, the cathedral and most of the city of Speyer were later left in a pile of rubble. 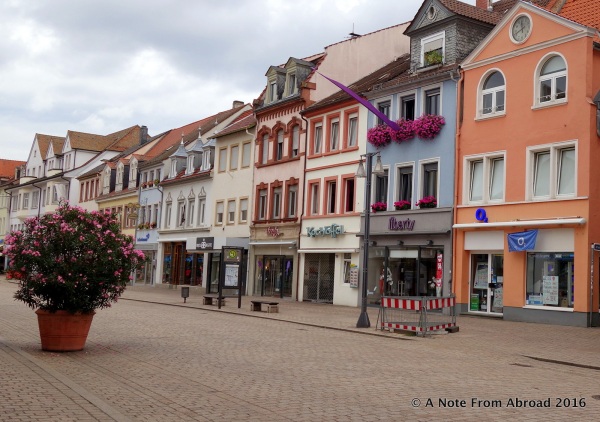 Today, all restored, the main pedestrian walking street (Maximilian straße) has all the charm you would expect from a German Old Town.

UP NEXT: The continuation of our day with a tour in Heidelberg (aka part 2 of a very full day)

GRATITUDE MOMENT: Today I am grateful to have learned more about how “rights” were assigned to certain groups of people back in the middle ages. Can you imagine a time when you were not free to buy and sell something, had to have permission to hire help, or needed to pay a tax just to enter the city. So much we take for granted. How blessed we are by our freedoms today. We still have room for improvements, of course, but I hope to never lose touch with what is RIGHT with our way of life.

Hi and welcome! We are Tim and Joanne Joseph and we have just embarked on our "next chapter". At a stage in life where traveling the world, taking pictures, and sharing our adventures with friends and family will be our dream come true.
View all posts by Tim and Joanne Joseph →
This entry was posted in Europe, Germany and tagged Altpoertel, Cathedral, Cathedral Bowl, Cruise, Domnapf, Europe, Germany, Jewish Courtyard, Judenhof, Legendary Rhine and Moselle, mikvah, Mikveh, Mittelalterlicher, Mount of Olives, Old Gate, Photography, Rhine River, River, River Queen, Sculpture, Speyer, Spier, The Camino, The Way, Travel, trip, UNESCO, Uniworld, vacation. Bookmark the permalink.

9 Responses to Speyer, Germany ~ A UNESCO Cathedral, 1500 Liters of Wine and a Charter for the Jews