Today was rather blah. We once again had some drizzle, interspersed with simply dark clouds and cool weather. The type of day that most people would prefer sitting in front of a warm fire, have a Hot Toddy and read a good book.

But as they say, something about “April showers bring forth May flowers.”

Tim was trying to come up with a good April Fools Day joke to pull on our tour leader, which he finally managed to do by dragging it out over several hours. I’ll explain more as the day goes on. 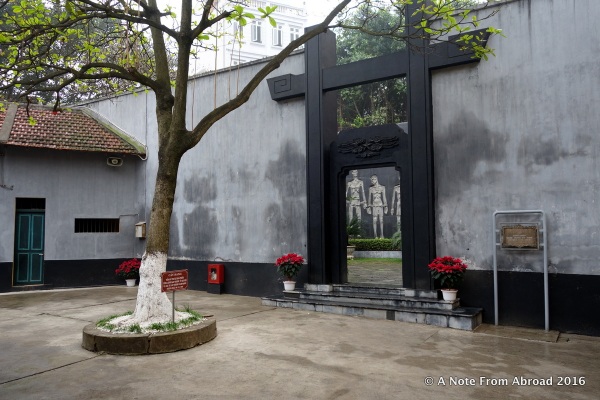 The first stop on today’s agenda was at Hao Lo Prison, or not so affectionately called “The Hanoi Hilton”.

Room showing how prisoners were shackled in place

First used as a French Prison for political prisoners when Vietnam was still part of French Indochina. This was a place known for its brutal treatment of the prisoners. With over-crowding and subhuman conditions, it became a “symbol of colonialist exploitation and of the bitterness of the Vietnamese towards the French”.

Section of the sewer system through which some prisoners famously escaped

After the French were defeated during the battle of Dien Bien Phu, the prison was turned over to the Democratic Republic of Vietnam in 1954 and served as an education center.

It was later used to house American POW’s during the Vietnam War, from August 5, 1964, to March 29, 1973, (which by-the-way is known as the American War here). John McCain was one of the most famous pilots to be detained here for part of his five + years as a POW.

John McCain being treated for his injuries while a POW here

Today the prison is only a small fraction of its original size and has been converted into a museum. The signs, posted in Vietnamese, English and French still serve as lop-sided propaganda that make it sound as though our soldiers were treated as honored guests and were lucky to have been imprisoned under such good and fair conditions.

It has been reported many, many times by the survivors, that the posted information is NOT accurate.

Following in the traditions of some Communist countries, four years after his death, the government of Vietnam constructed a marble crypt to house Ho Chi Minh’s embalmed body for public display. Other examples of this custom would include Lenin, Stalin, Kim Il-sung, and Mao Zedong. Every year the mausoleum is closed down for a month of two when Uncle Ho’s body is transported to Moscow to be refurbished.

“The Ho Chi Minh Mausoleum … is located in the center of Ba Dinh Square, which is the place where Vietnamese leader Ho Chi Minh, Chairman of the Communist Party of Vietnam from 1951 until his death in 1969, read the Declaration of Independence on 2 September 1945, establishing the Democratic Republic of Vietnam.” ~ Wikipedia

Our visit was timed just right to coincide with the changing of the guard ceremony.

While standing in front, our guide was telling us a bit more of the history of the mausoleum and a few facts about Ho Chi Minh. A man, not part of our group, seemed overly interested in what he had to say. As in many Communist countries, the guides are more discrete about what they say in public, but often tell a more thorough story when in private, or on the tour bus. Tim moved in to let Trong know he was being observed.

Considered one of Vietnam’s most iconic temples, this reproduction sitting in the middle of a lily pond left me scratching my head. The story of how and why it was built goes back almost 1000 years ago.

“The temple was built by Emperor Lý Thái Tông, who ruled from 1028 to 1054. According to the court records, Lý Thái Tông was childless and dreamt that he met the bodhisattva Avalokiteshvara, who handed him a baby son while seated on a lotus flower.

Lý Thái Tông then married a peasant girl that he had met and she bore him a son. The emperor constructed the temple in gratitude for this in 1049, having been told by a monk named Thiền Tuệ to build the temple, by erecting a pillar in the middle of a lotus pond, similar to the one he saw in the dream.” ~ Wikipedia

The French destroyed the original on their way out of the country in 1954, and the Vietnamese rebuilt it in the late 50’s, early 60’s.

Nice story and all, (and no disrespect intended) but somehow after seeing so many truly amazing, artful, impressive, colorful, well decorated, beautiful temples, to call this replica one of the two most iconic Buddhist temples in Vietnam is surprising at best. 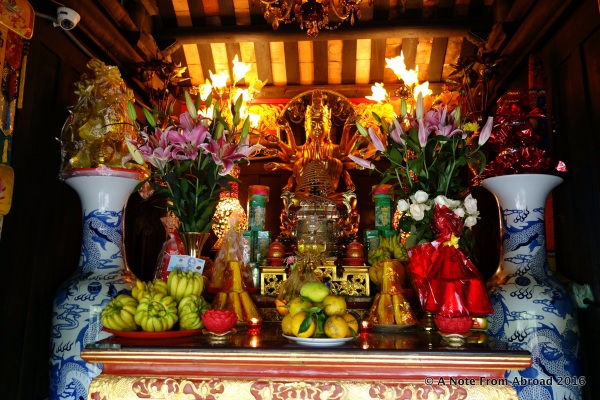 Interior of the One Pillar Pagoda

As I was waiting in line to walk up the stairs to see the inside, Tim casually mentioned once again to Trong that he had seen the same guy watching him.

Focusing on the 54 recognized ethnic groups within the country, it is considered one of the finest museums in Vietnam. The interior of the main building tells the story of the traditions, religious practices and events of the different peoples.

Ritual tree of the Thai

There was also a small section of art that I enjoyed and found both cheerful and colorful.

Outdoors, behind the museum is a collection of full-size houses, built and furnished in the traditional styles.

As we were leaving the museum, waiting for the rest of our group to come out of the gift shop, Tim followed up, telling Trong that there were now three men that had been following him and that one of them was taking pictures. By this time he was getting noticeably nervous, so Tim finally relieved him by saying, “April Fool’s”. I hope that translates well in Vietnamese 🙂

The fact that it started out with a truthful episode of him being watched, just made it more believable of course. The guys shared a good laugh, and hopefully all was forgiven.

I never thought about it until just now writing this, but I wonder if that had anything to do with Tim getting MSG so frequently in his meals that Trong helped order for him!

But no, that happened well before hand, so I’m sure there was no correlation…

Back in old town most of the group did a short walk along the shore of Hoan Kiem Lake, but four of us had so much fun riding on the cyclo a few days earlier that we chose to once again give it a try – anyway that’s my story and I’m sticking with it. This time is was much too short of a ride, and after haggling over fifty cents, got it straightened out, our fare paid, and we snapped a few shots while we waited for the group to catch up with us. 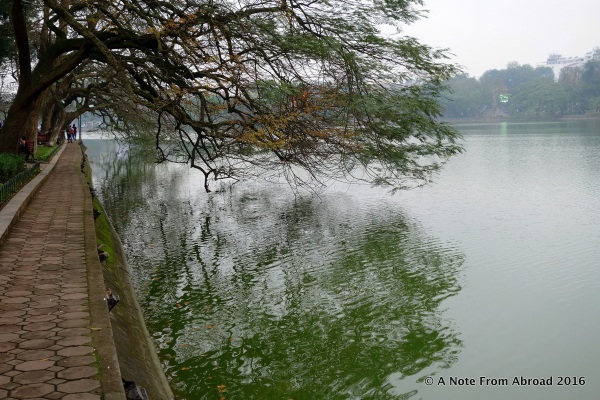 Along the shore of Hoan Kiem Lake

Stone pagoda in the middle of the lake 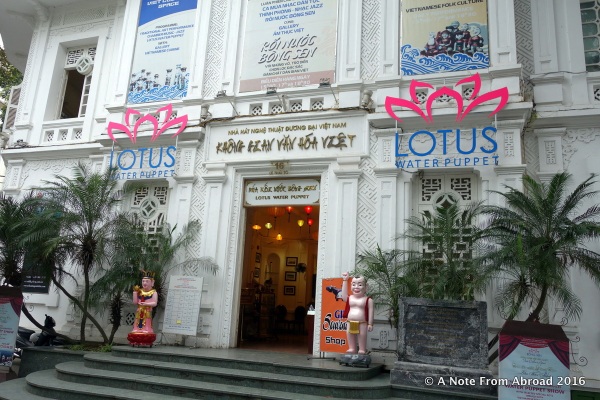 Another tradition – a Water Puppet Show

Inside the theater is a small stage with a pool of water in front of it. On either side are platforms for a small group of musicians to play Asian style music while the puppet masters recreate short stories. Traditional tales based on rural farm life, fishing, dragon dancing or tending buffalo are just some examples. 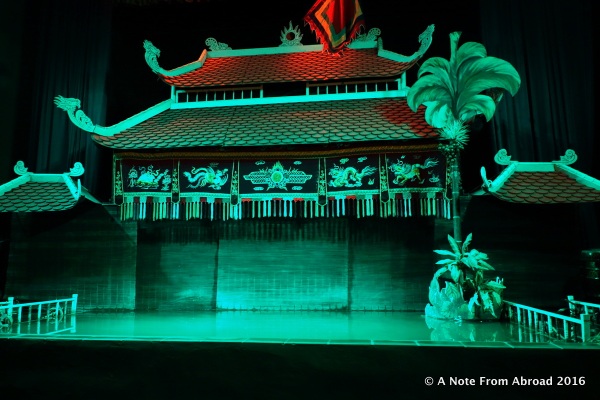 Stage with water prior to show

A moment during one of the acts

I believe the price is somewhere between $3-5 per person, but our performance was included in our tour, so I am not positive about that. We did have front row seats which was great fun to be able to see it up close.

Was it rather cheesy? Yes of course, but still something that should be seen at least once in your life. I mean after all – TRADITION…

To watch a few minutes of a Water Puppet Show, please click here.

We still had our evening explorations and dinner in old town to go, but this post is already quite long, so will end it here.

GRATITUDE MOMENT: Today I am grateful for my husbands wonderful sense of humor and how clever he is. Thankfully, I am seldom a victim in his trickery, but he does keep me entertained and we laugh hearty and often.