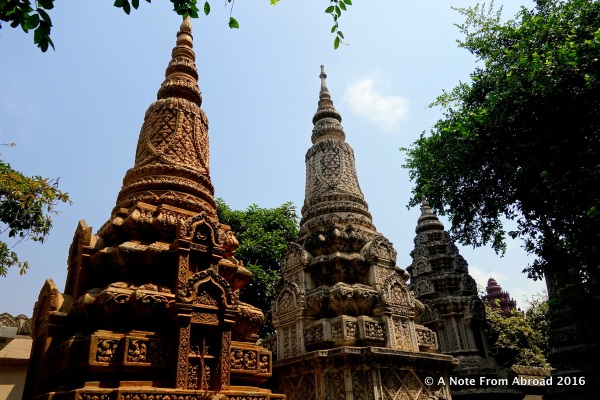 We started off the day with 12 of us plus Boreth loading into three Tuk Tuks and heading out for our morning optional city tour. Tim and I were joined by Jenny and Dave, the young couple from Wisconsin. Within about two minutes our driver had lost the group. He kept circling around a few blocks, passing by several sites, and I think eventually gave up on finding our group.

It took us about an hour to locate everyone else, but eventually we were reunited and our tour continued. 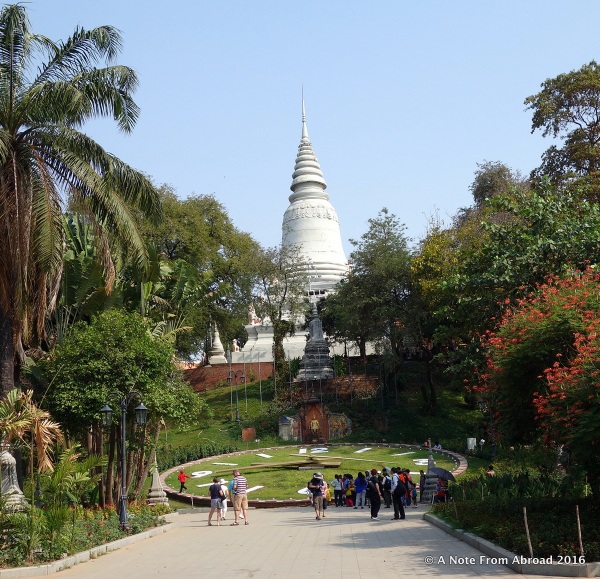 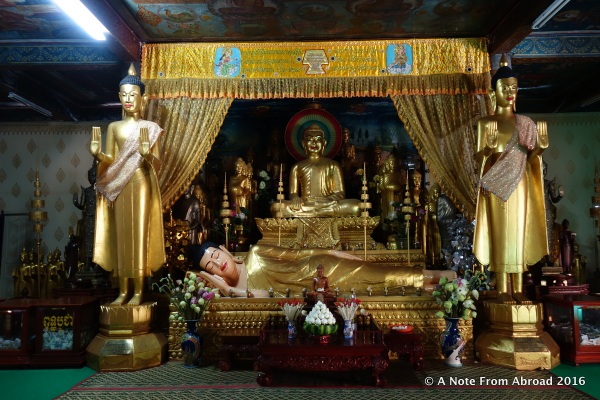 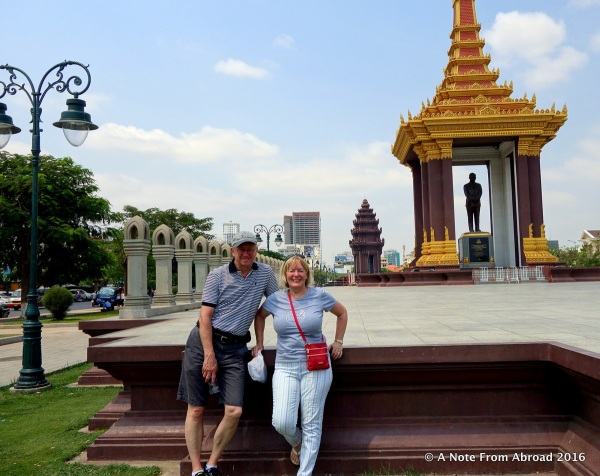 At Independence Monument (in background) and statue of Norodom Sihanouk

Tiny clams being sold on the street

In front of the Royal Palace

A bright moment in our day

Somehow I managed to slice open my big toe getting back into the Tuk Tuk after one of our stops. I’m now sporting a band aid on my foot, but other than internalizing a couple of naughty words and having to wash the blood off of my sandals, I’ll be just fine.

Back at the hotel for lunch we returned to the culinary school to get a quick bite before our afternoon tour. The highlights of the meal started with this cool beverage:

and ended with the refreshing dessert.

I knew that the afternoon was going to be emotional and difficult to deal with, but even knowing some of the violent history, I was not prepared for what we were about to experience. This time all 14 of us shared a roomy bus and were joined by a local guide. We were off to visit the Killing Fields and the Genocide Museum.

Pol Pot’s birth name was Saloth Sar. He was a Cambodian revolutionary who led the Khmer Rouge from 1963 until 1997. The Khmer Rouge regime arrested and eventually executed almost everyone suspected of connections with the former government or with foreign governments, as well as professionals and intellectuals.

It is estimated that 2.5 million people were killed or died from starvation during the Khmer Rouge regime.

Our guide was only a child during the time of mass killings. He lost his father and five brothers due to starvation. His stories based on his own experiences were chilling, sad, overwhelming and stretched the limits of my understanding.

I took quite a few pictures, but decided to only post a few, mainly to document that we were there, and to help jog my memory.

I do not want to share on my blog the extreme measures of torture that were used here. I had thought that the medical experimentation and torture we had learned about when touring Auschwitz and Birkenau were horrendous (and they were), but the methods of torture used here went so far beyond anything I had ever read about.

To say I was horrified would be an understatement.

The brutality that can be perpetrated from one person onto another person seemed to know no bounds. They found great pleasure in causing the utmost pain and cruelty.

The heat was starting to get to me by mid afternoon and my face turned bright red. Tim insisted that I stop and drink some cold water. So glad I did, as that revived me a little.

The site is a former high school which was used as the notorious Security Prison 21 (S-21) by the Khmer Rouge regime from its rise to power in 1975 to its fall in 1979.

As we neared the end of our tour, we were introduced to one of the very few remaining survivors of the prison, Mr. Chum Mey. I asked him how he managed to survive the torture. With our guide translating, he shared some of his story. He also has written a book which I purchased and plan to read while on this trip.

This day left me completely depleted.

GRATITUDE MOMENT: Today I am grateful…

Hi and welcome! We are Tim and Joanne Joseph and we have just embarked on our "next chapter". At a stage in life where traveling the world, taking pictures, and sharing our adventures with friends and family will be our dream come true.
View all posts by Tim and Joanne Joseph →
This entry was posted in Asia, Cambodia and tagged Cambodia, Chum Mey, Genocide Museum, Independent Monument, Intrepid, Killing Fields, Pagodas, Phnom Penh, Photography, Post Office, Royal Palace, Survivor, Tour, Travel, trip, UNESCO, vacation, Wat Phnom. Bookmark the permalink.

20 Responses to A brutal day in Phnom Penh – emotionally spent