Posted on September 6, 2015 by Tim and Joanne Joseph

We woke up to a light rain this morning that continued on and off throughout the day. It was refreshing and a welcome sight after enduring such a drastic drought up and down the west coast.

Just a short drive from our hotel in Astoria we spotted the Columbia River Maritime Museum. It had great reviews on Trip Advisor and our hotel also recommended it so after breakfast, off we went.

Fort Astoria was originally established as part of the lucrative fur trade industry in 1811 by John Jacob Astor, becoming the first permanent U.S. settlement on the Pacific coast.

But as the sea otter became scarce, the area shifted over to the salmon industry. There were 38 canneries on the lower Columbia at the height of the salmon canning boom.

We learned just how treacherous the Columbia River Bar is. Since 1792, over 2000 vessels, including 200 large ships, have been sunk at the entrance to the Columbia River. More than 700 people have lost their lives, earning this area the name “Graveyard of the Pacific”. 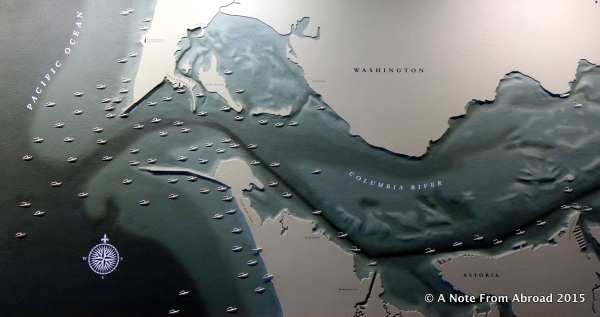 So why is this particular bar so dangerous?

“The Columbia is especially swift moving, flowing with the force of a fire hose. When it collides with the immense power of the Pacific Ocean, the two forces slam into each other at the entrance to the river creating the worst wave conditions on the planet.

Winter storms at the Columbia River Bar can create giant breaking waves, some over 40 feet tall. Even today’s largest cargo ships can be tossed around like bath toys in these fierce conditions.” ~ from wall posting at the museum

In 1977, the National Transportation Safety Board declared the Columbia River Bar to be a “specially hazardous area”. It is the only place so named of the entire 88,533 miles of the US Coastline!

Today specially trained river and bar Pilots who are among the best in the world are employed to guide ships in and out of the river entrance.

And have you ever seen a Lightship?

Entrance to the Columbia Lightship was included with our museum ticket. Anchored just beside the museum, we received an introduction and then toured through at our own pace.

“Serving as floating lighthouses, the lightships would anchor over treacherous reefs, or mark narrow approaches to channel, river or harbor entrances.

Lightships not only provided a beacon where a traditional lighthouse could not stand, but they could also be stationed offshore, where a beam from a coastal lighthouse would not reach.” ~ crmm.org 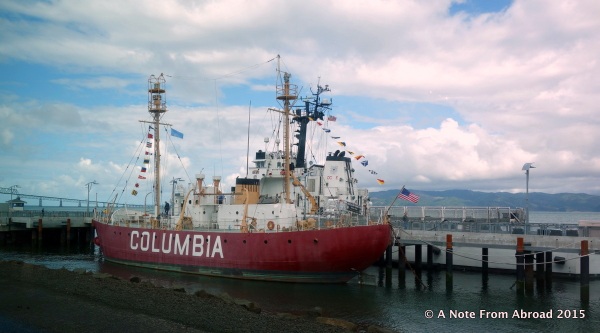 Facts and info about Lightships

We spent a couple of hours between the museum and lightship as well as enjoyed the 3D movie being shown on the Galapagos Islands. Tim commented that the $5 movie may end up being the most expensive movie we have ever seen, as we are now more interested than ever to see these isolated islands for ourselves.

Time for lunch. Having enjoyed the fresh fish and ambiance of the harbor the previous evening we returned for more fish and chips, this time made from halibut. They were fabulous!

Our view as we enjoyed our lunch

Tim snapped this picture of George cleaning a salmon. Doesn’t he just look the epitome of a fisherman? 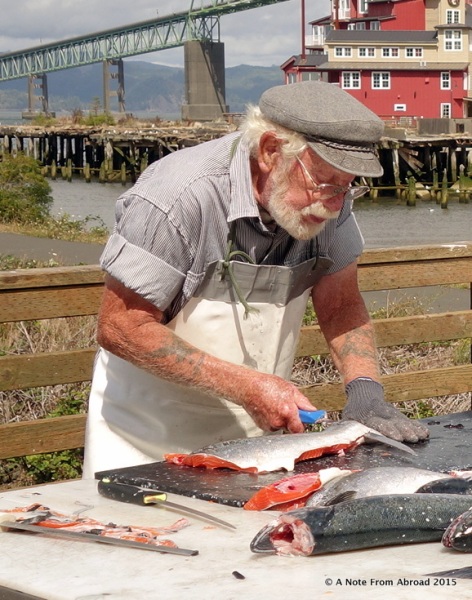 Fun Fact: The actor, Clark Gable, began his career at the Astoria Theatre in 1922.

It was time to get back on the road. The rest of the day was simply spent driving along the Columbia river, turning north and crossing into Washington at Longview. We are overnighting in Seattle.

GRATITUDE MOMENT: Today I am grateful for a word of encouragement I received from a dear friend about our blog. It meant a great deal!

We would like to extend a warm welcome to anyone new to our blog.

THANK YOU FOR JOINING US!

Hi and welcome! We are Tim and Joanne Joseph and we have just embarked on our "next chapter". At a stage in life where traveling the world, taking pictures, and sharing our adventures with friends and family will be our dream come true.
View all posts by Tim and Joanne Joseph →
This entry was posted in Oregon, United States, Washington and tagged Astoria, Astoria Harbor, Clark Gable, Columbia, Columbia River, Graveyard of the Pacific, Lightship, Maritime Museum, Oregon, Pacific Coast, Photography, Seattle, Travel, Washington. Bookmark the permalink.