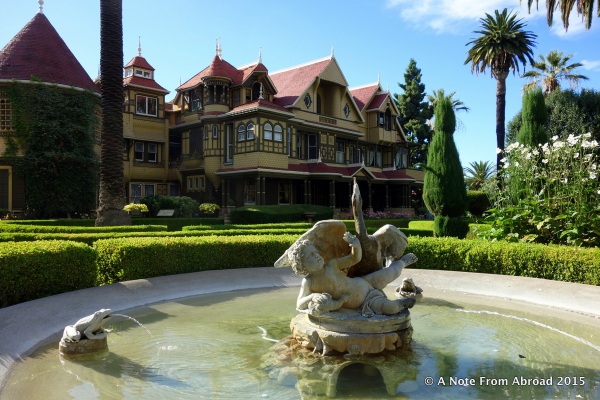 Most of our time was spent with family as we continued to celebrate the newlyweds.

We did slip away for a few hours and joined our son and his girlfriend on a tour through the Winchester Mystery House.

We could not take photos inside the home, but outside was OK.

The story behind the Winchester Mystery House is rather a sad one. Sarah Winchester lost her infant daughter, and then was widowed when her husband died prematurely from Tuberculosis.

Seeking comfort and answers, Sarah consulted a medium in Boston who advised her that both her daughter and husband had died because of the spirits of those killed by the Winchester rifle. The medium further suggested that she would be next unless she moved west. She was instructed to:

“…appease the spirits by building a great house for them. As long as construction of the house never ceased, Mrs. Winchester could rest assured that her life was not in danger. Building such a house was even supposed to bring her eternal life.” ~ WinchesterMysteryHouse.com

In 1884 she purchased a small farmhouse in San Jose, California and spent the next 38 years building non-stop. With no formal training, (or perhaps to confuse the spirits) she ended up with stairs that went no-where, windows that opened up onto walls, and an entire hodgepodge of rooms, halls, stairs, and windows that made no sense.

After touring through 110 of the 160 rooms, we also took a behind the scenes tour which covered the stables, garage, outbuildings, grounds and basement. Hard hats were required.

Hard hats are not the most flattering headwear

Gratitude Moment: Today I am grateful that our son and his girlfriend invited us to tag along with them. How I cherish these special family times!