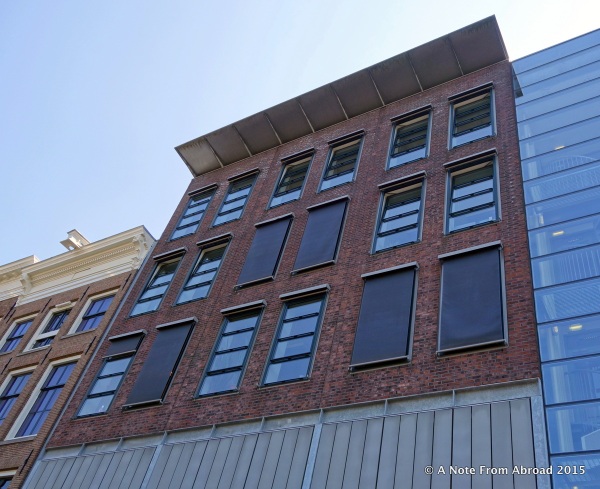 Everyone had warned us about the LONG lines to get into the Anne Frank House. Our hotel encouraged us to go first thing in the morning or suffer the consequences which would probably translate into waiting in line for 3-4 hours.

They officially open at 9:00 every morning, so we thought that arriving by 8:30 would be OK. Our friendly concierge advised us to go earlier, so we were IN LINE by 8:00, a full hour before opening time.

And I am so glad we listened as 75-100 people were already queued up when we arrived.

Tim had read on-line that it was not uncommon for them to open a little early, and true to form, at 8:40 the line began to move and by 9:00 we had progressed enough to enter the building to buy our ticket.

Just FYI, there are toilets available inside, just past the ticket office. No photography is allowed inside.

The Anne Frank House is a museum, as well as the actual place where Anne wrote her now famous diary while hidden in the upper floors during the Second World War.

The office/home is relatively small. It is empty and devoid of any furnishing. There is no “tour” per se, but instead we stayed in an orderly line for a set route, weaving along room by room, taking in the recorded videos and reading the numerous written messages that covered many of the walls.

This is the location where Anne, her older sister Margo, their parents (Otto and Edith), and four other jews were hidden and kept safe from the German’s starting on July 6th, 1942.

Anne had received a diary with a red checkered cover for her 13th birthday and she took it with her. The actual diary is on display near the end of the tour.

They remain in hiding until they were betrayed, and arrested on August 4th, 1944, just over two years later. The eight former inhabitants of the Secret Annexe were all deported to Auschwitz-Birkenau death camps. Of the eight, only Otto (Anne’s father) survived.

Two of the “helpers” who had provided food for the eight, found Anne’s diary and kept it safe. In 1945, Otto returns to Amsterdam, learns that none of his family survived. The diary is given to him.

Otto Frank finds a publisher and in 1947, the diary is published for the first time in The Netherlands.

This was obviously a very short version of the story. If you have never read the diary, I recommend doing so. You can get it on Amazon by clicking here.

Today was hotel moving day. I am going to miss our cozy room at the Die Port van Cleve Hotel. I would give it high marks for location, friendly and helpful staff. They made an effort to assist us with planning each days activities, gave helpful tips regarding how to get there and the best way to avoid wasting time waiting in lines.

The location is fabulous – 5-10 minute walking distance from Central Amsterdam train station, right across the street from Dam Square, 6 minute walk to Anne Frank House, and the tram stop is right in front of the hotel. 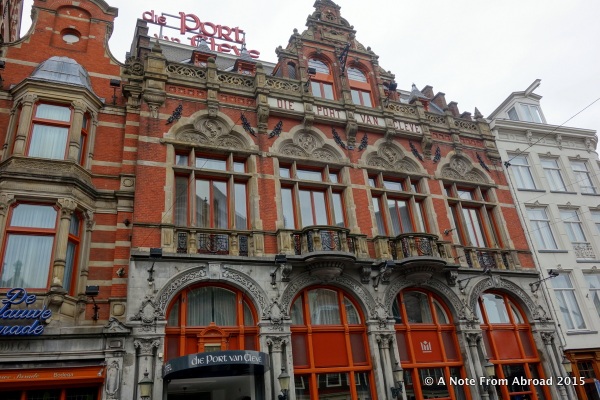 They have a strong no smoking policy which I appreciate. We were fortunate to have been given room #221 which has one of only two balconies that overlook the main boulevard. If you are overly sensitive to street noises, you may not want this room, but for us it was a bonus to look out onto the church and Royal Palace of Dam Square.

The internet was recently redone, and works well now. Refrigerator and a safe in the room that was large enough to hold our laptops. I was able to do my blog posts and upload pictures with a reasonable fast and free service. The breakfast buffet was filling, tasty and more than adequate.

My one small complaint, is that the shower was just OK. Plenty of hot water and average water pressure, but for some reason the shower curtain had been folded in half and put on the rod that way which resulted in only 1/2 of the shower/tub being covered. It made it more challenging than it should have been to get a proper shower. I’m also not a big fan of hand-held shower heads, but that is more a personal preference, and they are common in Europe.

We ventured out via the tram system with our luggage to move to our next hotel where we joined our Gate 1 tour group. 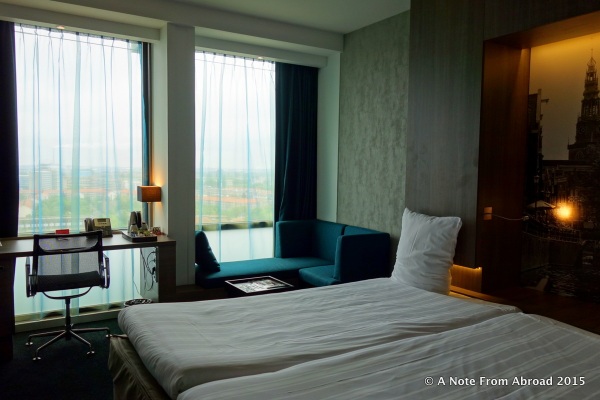 Gate 1 has selected the Ramada Apollo for this date, however I believe that other departures use a different hotel. The Ramada was formerly a bank and was only a few years ago remodeled and turned into a hotel. The room is comfortable, spacious, has a small sitting sofa/nook in the corner with a decent view of the city. We are in an end/corner room #1528 with nice large windows that let in good light. Nice perk – there is an iron and board in the room.

It is disappointing to be out so far from the heart of the city. Granted it is easy to hop on the tram to get anywhere, it is just a shame for those just arriving to not be able to simply walk out the door to explore the highlights of Amsterdam.

Gratitude Moment: Today I am grateful that places such as the Anne Frank House have been preserved so that we and generations to follow can see and learn from the past. I hope that as we progress as a civilization we will eliminate hatred and prejudices.

Hi and welcome! We are Tim and Joanne Joseph and we have just embarked on our "next chapter". At a stage in life where traveling the world, taking pictures, and sharing our adventures with friends and family will be our dream come true.
View all posts by Tim and Joanne Joseph →
This entry was posted in Europe, The Netherlands and tagged Amsterdam, Anne Frank House, Attic, Diary, Die Port van Cleve, Gate 1, Germany, Hiding place, Hitler, hotel, Jews, Museum, Ramada Apollo, Second World War, Secret, The Diary of Anne Frank, Tour, Travel, World War II. Bookmark the permalink.