Amsterdam ~ Bikes, UNESCO canals, color, and a bit of debauchery 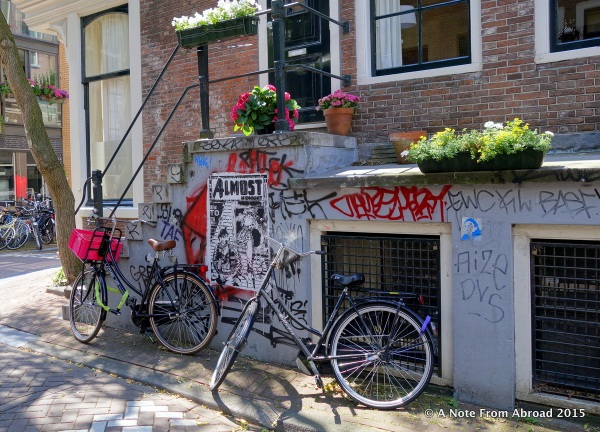 Amsterdam – It’s all about bikes, canals, tulips, color, fun, and a bit of debauchery.

We had a rather slow-paced day today due to limited sleep last night. I initially seemed to pass out and got a solid four hours, woke up at 12:30 this morning, wrote yesterdays blog post, and then could never go back to sleep. Perhaps a combination of wondering where in the world our luggage had disappeared to, as well as being about nine time zones from home and a bit upside down may have been factors.

Checking in with British Airlines our lost luggage claim showed that they were searching for it, but somewhere still to be found. I’m trying to stay jovial, but the thought of loosing my new wardrobe that my dear friend Terri had helped me put together, as well as Tim’s clothing was wearing on me (pun intended).

We got out bright and early to do some exploring at Dam Square which is only a block from our hotel. I was surprised at how empty the streets were in the morning vs. the night before. This seems to be much more a night-time town.

“The Dam derives its name from its original function: a dam on the Amstel River, hence also the name of the city. Built in approximately 1270, the dam formed the first connection between the settlements on the sides of the river.

As the dam was gradually built up it became wide enough for a town square, which remained the core of the town developing around it. Dam Square as it exists today grew out of what was originally two squares: the actual dam, called Middeldam; and Plaetse, an adjacent plaza to the west.” – Wikipedia

The Royal Palace is the highlight of Dam Square. Built in the 17th century, it was originally the city hall, but later became the royal palace for King Louis Napoleon.

“On top of the palace is a large domed cupola, topped by a weather vane in the form of a cog ship. This ship is a symbol of Amsterdam.” – Wikipedia

Right next to the palace is the 15th century Nieuwe Kerk (New Church) which is no longer used for religious services. We did not go inside, but may try to before we leave so we can see the Michiel de Ruyter memorial monument.

Obtaining our tickets for the Hop On Hop Off through our hotel gave us a small discount.

We were actually a little disappointed in the Hop On Hop Off bus tour here. Normally we enjoy getting a bit of an overview of a city this way, but not this time. There were no speakers on the upper deck, so you could not hear the narration being given over the microphone downstairs. Several of the ports where you would plug-in headphones were not working either. We felt like this was more a sales venue for the free tour at the diamond factory, which led to in-house shopping, and to push their other tours throughout the Netherlands.

We did see our first authentic wind mill however… 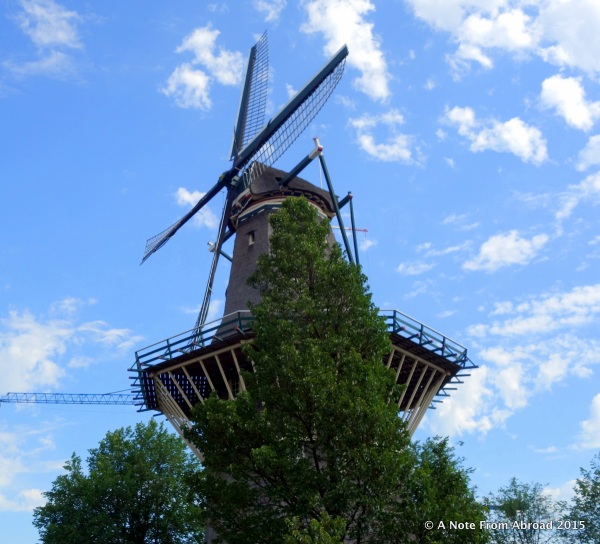 Yay! Finally got to see an original style wind mill.

I did pick up one tidbit of information from the tour though. I found out that carrots are orange because of Amsterdam. The color for the royal family is orange, but at the time there were many other colors of carrots out there, including while, red, purple, and yellow. Through cross breeding, the Dutch created the orange carrot for the monarchy.

In case you are dying for more information, click here for the history of the carrot. Yep, I bet my click stats will be soaring now 🙂

Next up was simply walking around the beautiful canal rings. In all seriousness, clicking on this link to read about the history of the canal rings is quite interesting. It covers aspects including the architecture, living on the canal, water management, the early beginnings, becoming a UNESCO site and much more.

Just roaming around, with no particular place in mind to just see whatever we came across is often my favorite way to spend my time getting to know a new city. Here are a few of the shots we captured as we explored.

Canal excursion boat. I think we will be taking a similar boat on our Gate 1 tour in a few days

Bikes are parked all along the bridges and sides of the canals, as well as just about everywhere else in Amsterdam

Our weather has been ideal, and walking the canal ring was a highlight for both of us

Finally, some tulips that are still in bloom

Side walk cafes line many of the canals

Children watch as small boats slowly cruise by. Many of the canals are tree-lined.

Bright flowers are common along the many bridges

The side streets were also pleasant to explore and we took our time simply looking.

The tall steeple in the background is another church, Westerkerk,  located right near the Anne Frank house.

We did go inside the Westerkerk (I think this translates to Western church, but not positive). It is not nearly as elaborate as many of the older churches we have visited. The exterior in my opinion was more interesting, but still glad we took a moment to check it out.

Fun Facts: Both Rembrandt and his son were buried in the floor of this church. Queen Beatrix and Prince Claus were married here. Anne Frank could see the tower and hear the bells from her attic window.

Interior of church, just below the organ pipes

There are interesting “souvenir” shops with a variety of products for sale, such as: 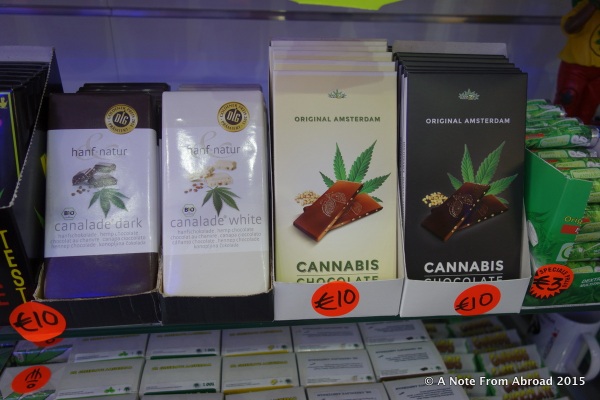 Finally returning to the hotel where I managed a couple hour “power nap” – not sure what that means, but I do know that I slept hard. In the meantime, Tim amused himself out on our balcony doing some serious people watching. He also played with his iPhone and learned how to do a time-lapse video.

Here is the view from the balcony of our hotel room. I have to say that it has been so nice to be able to get fresh air and see what is going on right from our room. It is only 20 seconds long, but it may give you some insight into a typical street scene. Be sure to notice all the bikes and frequent public transportation.

GRATITUDE MOMENT: Hooray, hooray, hooray, when I was almost done writing this post, our luggage was delivered to our room! I guess I get to wear something clean tomorrow!!!!

Hi and welcome! We are Tim and Joanne Joseph and we have just embarked on our latest adventure. We hope you will join us!
View all posts by Tim and Joanne Joseph →
This entry was posted in Europe, The Netherlands and tagged Amsterdam, Bicycles, Bus tour, Canal Ring, canals, Cannabis, Dam Square, Hop on Hop off, Photography, Royal Palace, Souvenirs, The Netherlands, Travel, Tulips, UNESCO, wind mill, wooden shoes. Bookmark the permalink.