Palm Springs ~ Tramway to the top of the mountain

With my mother-in-law in tow, our first big outing was a drive to Palm Springs to take the Palm Springs Aerial Tramway to the top of the mountain and visit Mount San Jacinto State Park.

It had been windy at the cabin and we had already delayed this trip a couple of days, knowing that if the winds exceeded a certain level, the tramway would be shut down for the duration.

But by Friday, the winds had calmed down, and we set out for some adventure and sightseeing… 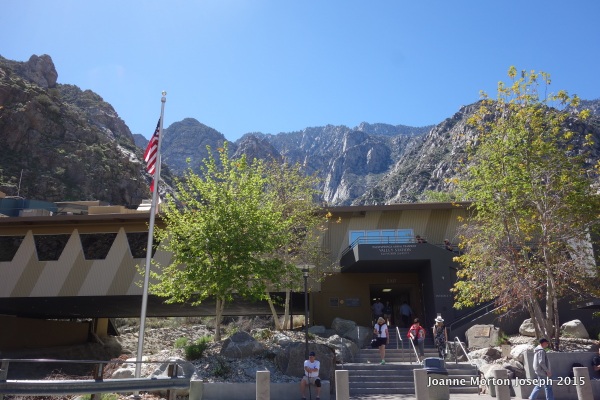 The Valley Station is at 2600 feet in elevation and we will ascend to just over 8500 feet at the Mountain Station.

The dream for a ride that would carry passengers from the heat of the dessert to the cooler mountain tops was first conceived in 1935 by a young electrical engineer, Francis Crocker. Met by enormous obstacles including public opinion, funding, bureaucratic red tape, and World War II, the project was shelved until 1945.

Finally a tram bill was passed and Governor Earl Warren signed the measure creating the Mount San Jacinto Winter Park Authority. By 1950, the wheels were put in motion to try to work out the technical aspects of road and tower construction as well as raising funds. Private revenue bonds were sold that raised the $8 million needed and land was donated for the project.

The Korean War caused further delay but by July of 1961, construction finally began. Building five towers that would support the tramway was a daunting task. The lowest tower is the only one that was accessible by road. The remaining four towers had to be built up the very steep canyon walls using helicopters.

“The helicopters flew some 23,000 missions during the 26 months of construction, hauling men and materials needed to erect the four other towers and the 35,000 sq. ft. Mountain Station.”

“Construction of the Tramway was an engineering challenge and was soon labeled the “eighth wonder of the world.” The superlative was earned because of the ingenious use of helicopters in erecting four of the five supporting towers. Twenty-years later, the Tramway was designated an historical civil engineering landmark.” ~ pstramway.com

Francis Crocker’s dream was completed in 1963.

One of only three rotating tramways in the world

There are only three rotating tramways in the world – Table Mountain in Capetown South Africa, Palm Springs California and in Engelberg Switzerland. Tim and I had not realized how unique this was, as just a few weeks ago we took #1 of 3 up to the top of Table Mountain. Now we just need to get to Switzerland for the trifecta! 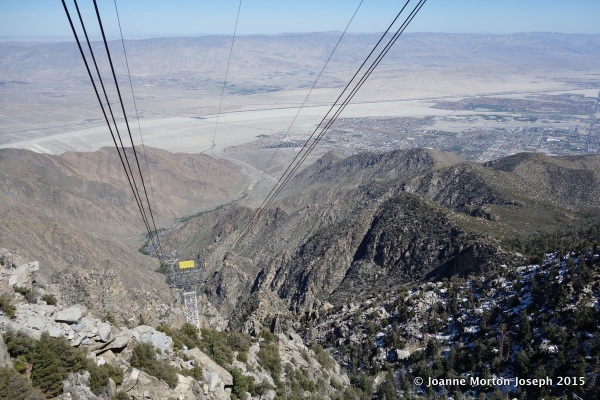 Going up the mountain. Take a look at the yellow square in this photo

It took 10 minutes to travel the 2.5 miles to reach the mountain station at 8500 feet. Slowing slightly as we passed by each of the tower stations, the tram would rock a bit but overall the ride was quite smooth.

In the picture above you can see a small yellow square platform. It is hard for me to imagine, but this is where the helicopter would land bringing in construction materials during the building of this tramway.

The weather was noticeably cooler at the top, but still comfortable for us to hike in light jackets. There are several scenic hikes you can take through the mountain parklands. We chose a short mile hike that would allow us to see some scenic lookouts. Tim and I would love to return later in the year to do some camping. 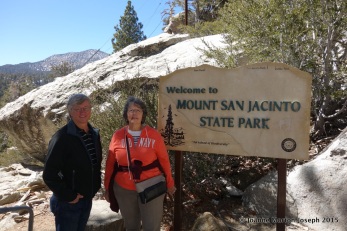 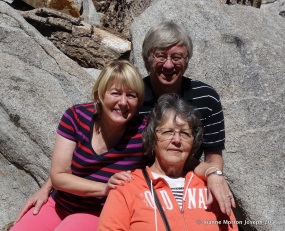 Some of the scenery: 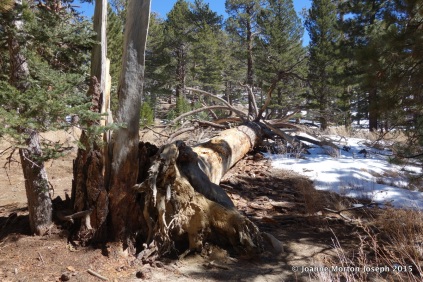 There are several scenic lookout points. My favorite was Notch 3, but you can also get some pretty great shots right from the platform at the top of the tramway. 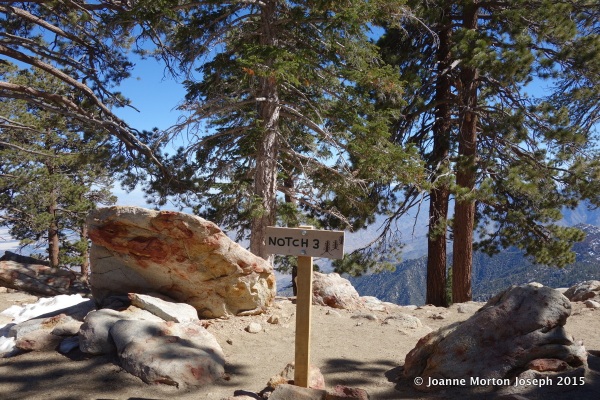 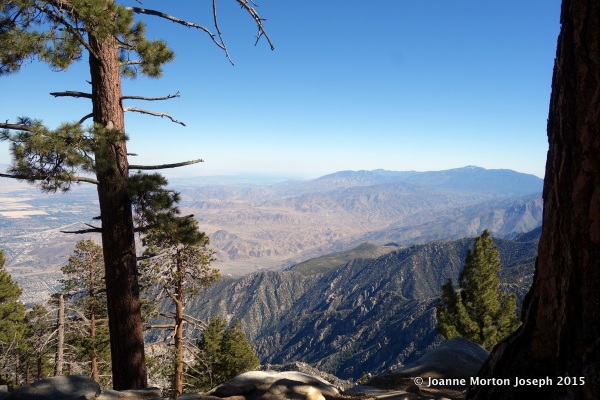 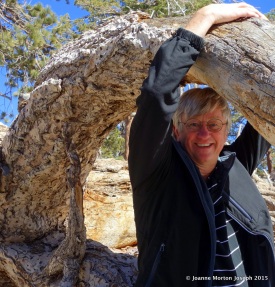 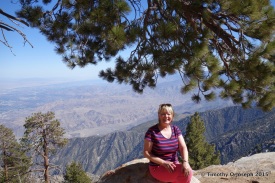 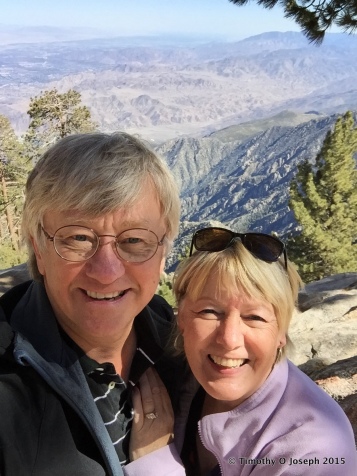 There are several options at the Mountain Station for a meal or liquid libation ~ Peak’s Restaurant is more fine dining or Pine’s Cafe for informal cafeteria style. The Lookout Lounge offers a full bar.

Old style tram car. These were replaced by the new revolving cars in 2000

And just in case you have some extra time on your way to Palm Springs or returning, a stop off option would include the 180 store Desert Springs Premium Outlet Mall in Cabazon for a little retail therapy.

Gratitude Moment: Today I am grateful for a man’s vision that he hung onto for 28 years to make this all possible.

Hi and welcome! We are Tim and Joanne Joseph and we have just embarked on our latest adventure. We hope you will join us!
View all posts by Tim and Joanne Joseph →
This entry was posted in California, United States and tagged Cabazon, California, Desert Springs Premium Outlet Mall, Hiking, Mount San Jacinto, Palm Springs, Photography, State Park, Tramway, Travel. Bookmark the permalink.