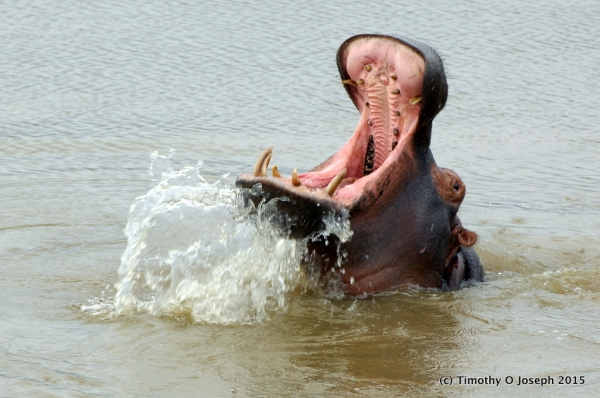 Warning – look at the size of those teeth

On the move again today with a flight out of Cape Town to Durban, South Africa. Since this was a domestic (within the same country) flight, the post 9/11 security check-in rules were much more lax. We were not required to take off shoes, computers stayed inside our bags, and we were allowed to take our water bottles through security and on to the flight. Our new bus with our driver, Donald, was waiting for us after we collected our luggage.

Cape Town from the air

We spent a good amount of time on the bus today, but once again Tesse kept us entertained with stories from her life, to the politics and policies of South Africa. We are really encouraging her to write her story, as her life experiences would make a fascination book and I would bet it would become a best seller.

Our bus route will take us from Durban to our overnight in Hluhluwe which is 163 miles (262 km). We have a couple of stops to break up the drive before a late afternoon nature cruise. 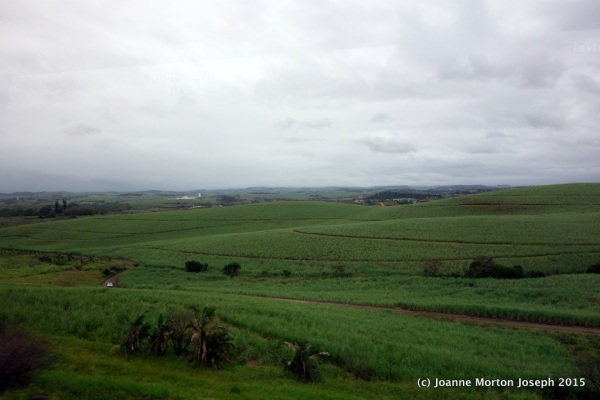 Country side with sugar cane crops

The area is green and lush with large farms on both sides of the road. Many crops are grown in this area, but I notice an abundance of sugar cane with some pineapples.

Jabula Beach was a quick stop for us to get our feet wet in the warm waters of the Indian Ocean. The light sand beach had a quick drop off with a wicked rip tide so we were cautioned to not venture far.

On the Indian Ocean at Jabula Beach

The sharp drop off, makes for a fisherman’s delight, but there were also crocodiles, hippos and the great white sharks in the water, so not an ideal combination for a swim! Sure makes our California beaches tame in comparison.

ST LUCIA ~  The area and scenery were beautiful but the highlight of our day was the late afternoon nature cruise on the St Lucia Estuary. This area has the highest concentration of hippos in South Africa.  The hippos are even known to roam the streets of the town in the evening.

The estuary is part of the Greater St Lucia Wetland Park, recently renamed the iSimangaliso Wetland Park which is a UNESCO World Heritage Site.

We found a seat on the upper deck right in the front which afforded us a great view and a perfect place from which to take pictures.

Prime viewing spot in the front of the boat

Right off the bat we spotted a Nile crocodile floating in the water not far from our boat. The are the largest crocodile in Africa and the second largest of the crocodilian family. Only the salt-water croc is larger.

And then the bright yellow weaver birds with an entire colony of nests along the water’s edge.

The main attraction of course is the hippopotamus and we were not disappointed. First a few small groups came into sight, and then the further we traveled into the estuary, we came across larger families. I counted 16 in the largest family group. 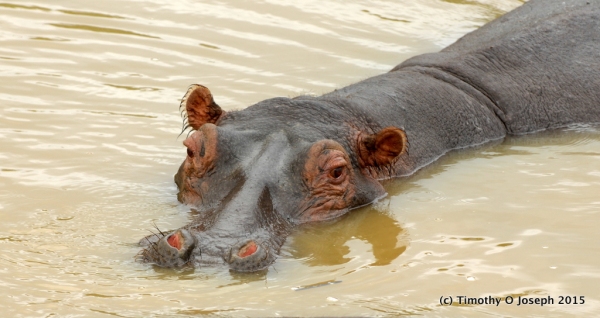 Here are a few fun facts we learned about the hippopotamus:

They don’t look all that dangerous

The hippos appear to be docile, looking at us with serene eyes, but we learned that they are ill-tempered and responsible for killing people every year. They can attack without provocation and at any time, however their “yawning” is a warning sign.

One of the biggest surprises for me was just how large their teeth are. The captain on our boat passed around one she classified as on the smaller side. The incisors can reach 40 cm (1.3 ft), while the canines reach up to 50 cm (1.6 ft). They are used primarily for fighting and not for eating. 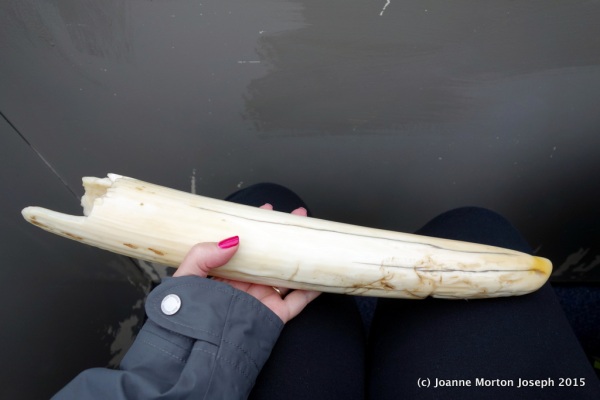 That is one massive hippo tooth

We also spotted a couple more crocs that were sunning themselves on the bank, as well as a large variety of birds. 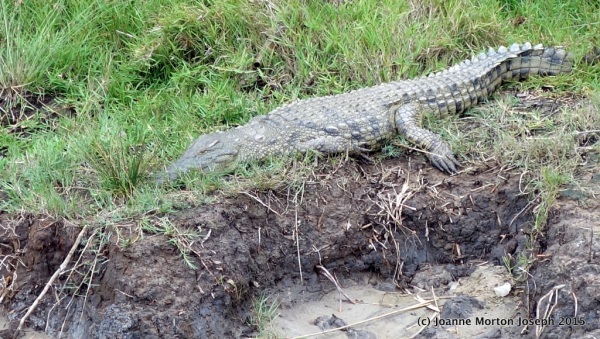 Catching a little sun on an overcast day

As we returned back to the dock just before sunset, the water was smooth and peaceful.

The end to another wonderful day!

GRATITUDE MOMENT: Today I am grateful to have been able to touch the Indian Ocean and to have observed hippos in their natural environment.

Hi and welcome! We are Tim and Joanne Joseph and we have just embarked on our latest adventure. We hope you will join us!
View all posts by Tim and Joanne Joseph →
This entry was posted in Africa, South Africa and tagged Crocodile, Gate 1, Gate 1 Travel, Hippo, Hippopotamus, Hluhluwe, Jabula Beach, Nile Crocodile, Photography, Ploceidae, South Africa, Tour, Travel, UNESCO, Weaver birds. Bookmark the permalink.