Part 2 of 3 – repost about our trip to Cuba almost three years ago.

A Note From Abroad 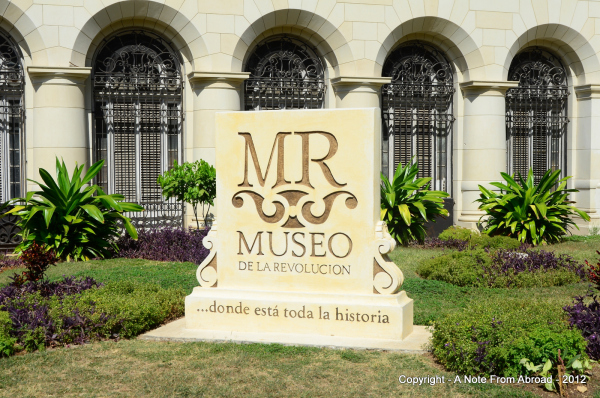 Museum of the Revolution

Housed in what was the former Presidential Palace up until 1959, the Museum of the Revolution is located in Old Havana, just a short walk from our hotel.  It is listed as a “must see” for Cuba, and was included in our tour.  The museum details the time frame when Cuba’s president Fulgencio Batista was in office, through the Cuban Revolution when Castro took control, the Bay of Pigs and the Cuban Missile Crisis.  The admission fee was low (approximately $6), but they did charge extra if you wanted to take pictures inside.  The building when in its prime was lavishly decorated, in part by Tiffany’s of New York.

Hi and welcome! We are Tim and Joanne Joseph and we have just embarked on our "next chapter". At a stage in life where traveling the world, taking pictures, and sharing our adventures with friends and family will be our dream come true.
View all posts by Tim and Joanne Joseph →
This entry was posted in Uncategorized and tagged Cuba, Photography, Travel. Bookmark the permalink.