Coban Marketplace and the Quetzal

On the road from Semuc Champey toward Coban

Just the three of us loaded up our traveling suitcases and backpacks and pointed the SUV toward Coban. Today we get to see the dirt road we had traveled two nights earlier draped in a thick fog. The countryside is lush, green and how you might picture a rainforest.

The road was still wet, slippery, and we once again dodged rock and mud slides. Several times Hugo needed to put our vehicle into 4 wheel drive to make it up steep inclines.

Broken down in the middle of the road

Coban was our destination with approximately 250,000 residents. The city was founded by Dominican friars in 1543 but did not flourish until a significant German population arrived at the end of the 19th century and developed a healthy coffee growing district.

In 1941, all of the Germans were expelled from Guatemala by then leader, Jorge Ubico. Some suspect this was in cooperation with the US government as many ended up in internment camps in Texas and were later traded for American POW’s held in Germany. Today the remaining Germans or those that returned after WWII, have been assimilated into the local society, mostly through intermarriage.

Church on the central plaza, Coban

Today we are here to walk through the large marketplace. If one wants to see the backbone and guts of a city, there is no place more authentic than where they go to buy their food.

This is a typical market day in the city. Once a street, the dirt pathway is now filled with vendors lined up trying to showcase their wares. There are boxes filled with fruits and vegetables, woven baskets with live chickens or turkeys with their feet tied together, a butcher, a baker and yes, even a candle stick maker.

A large wooden crate housed about twenty young pigs, cramped inside with pink snouts poking out. A man sat on a door sill mending well-worn shoes while another shouted to me to take his picture.

Tim and I were the only gringos wandering through the stalls. I’m guessing some were as curious about us as we were about their lives.

Wander a bit with us… 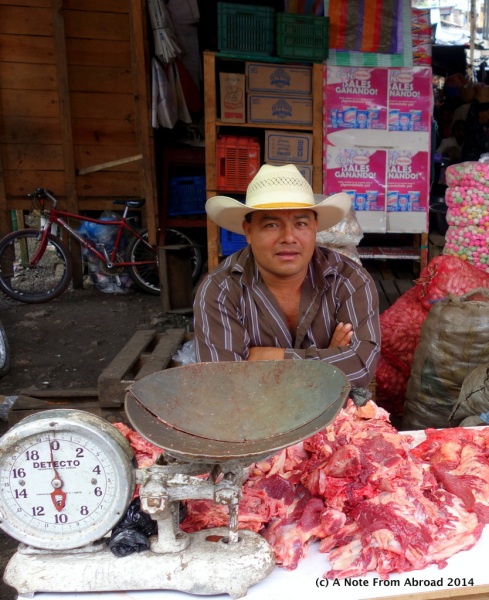 Raw meat ready to be weighed and wrapped 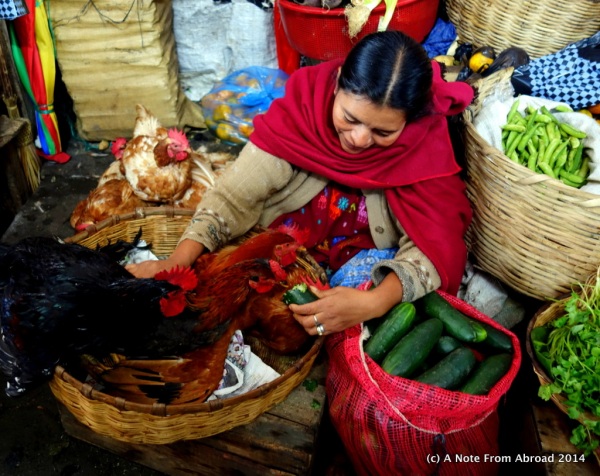 Lovingly feeding her chickens a cucumber

Women carry goods carefully balanced on top of their head 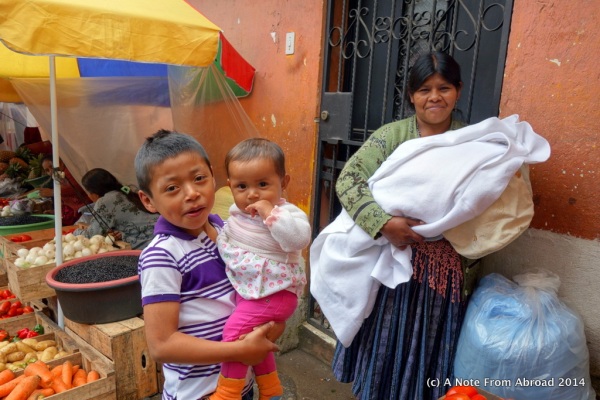 Mothers bring their children along 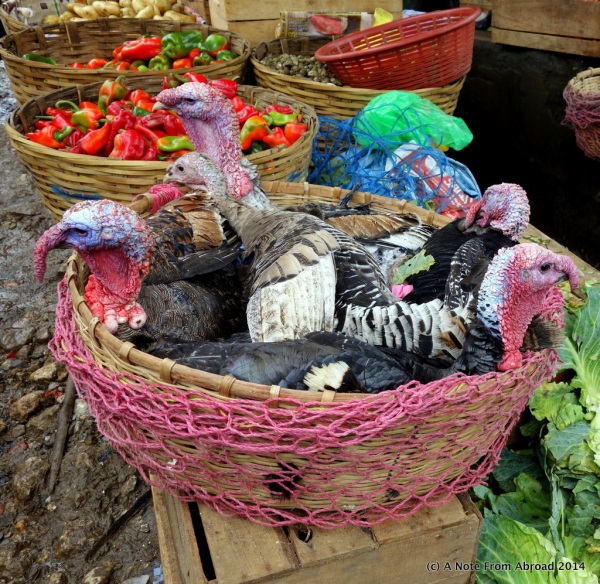 Baskets of peppers and turkeys 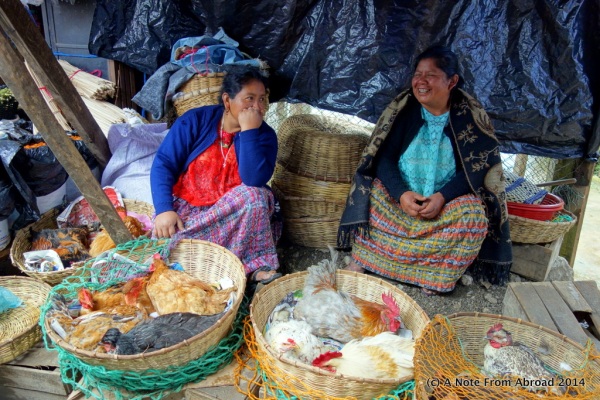 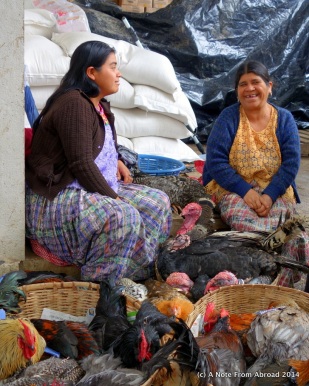 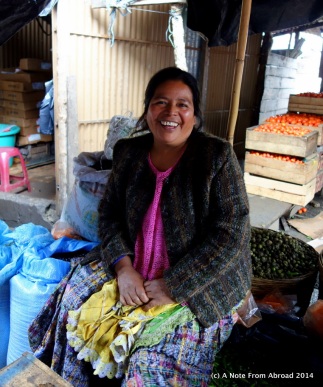 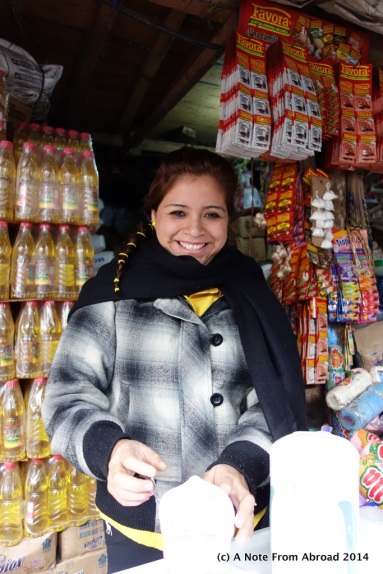 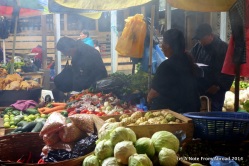 Time for a lunch break 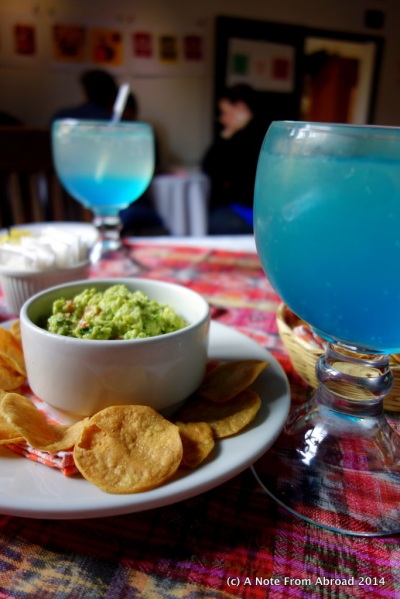 We had planned on stopping at the Biotopo Del Quetzal for a walk through the rainforest, hike past a waterfall and try to spot the very elusive Quetzal, the national bird of Guatemala. Hugo had already warned us that the chances were quite slim that we would see one of the birds. It had been 13 years since he had seen one in Guatemala. And since the sun was still playing hide-and-seek with the clouds, our hopes were not high.

The Quetzal is considered one of the most beautiful birds in the world. The male will sport brilliant tail feathers up to three feet in length during mating season, with brilliant green plumage on their back, head and wings, offset by a fire-engine red belly.

Quetzal is also the name of the currency in Guatemala which currently offers an exchange rate fluctuating from 7 to 8 quetzal per US dollar.

Driving into the entrance at the preserve, we were greeted by the park ranger, who nonchalantly mentioned that there was a large, full feathered Quetzal in the tree above the parking lot.  Thinking he was joking, Hugo parked the car and it was not until we saw it fly past us that we realized he just might make up for us not seeing any manatees a few days earlier.

Sure enough, by the time we got out of our car, Mr. Quetzal had circled back around and settled just above our heads. He seemed to be taunting us as he would flit and fly from tree to tree, remaining in the immediate area for over 1/2 an hour as we snapped away. Most of the time he was well sheltered by many leaves, but we did get lucky and captured a couple of kind-of decent pictures. 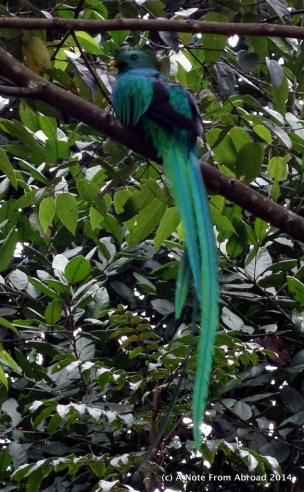 Since the weather was not optimal, and we had successfully seen the elusive Quetzal, we chose not to take the hike to the waterfall. With some daylight left, Hugo offered to take us to a church on the side of the hill with a nice panoramic view of the area.

Steps leading down the hill 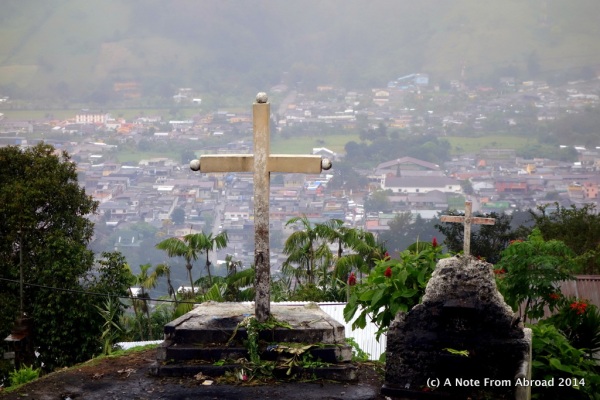 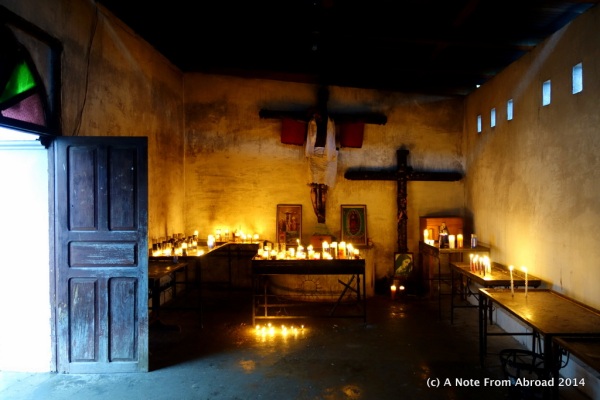 Lighting a candle, giving thanks for a wonderful, safe trip

Our time in Guatemala was almost over and we checked into our final hotel, Ram Tzul in Coban. Sadly this turned out to be my least favorite of our hotels. The setting was lovely, and the room had a charming wooden design with large windows overlooking a garden. 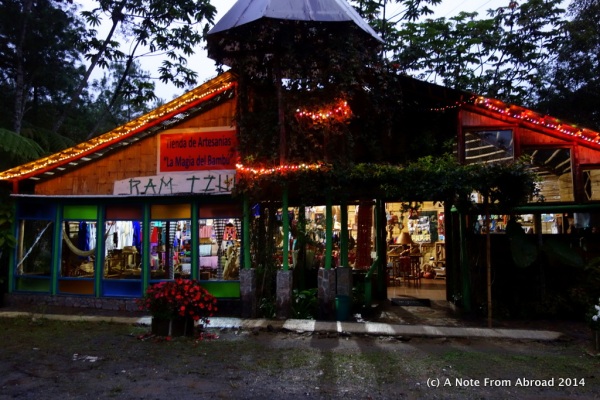 Room certainly had charm and potential 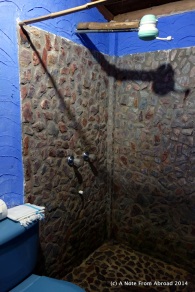 What was lacking, besides a hot shower, was no mattress cover and a sheet that was cut just the size of the mattress which meant that whenever you moved, the sheet rolled up and you were lying on a bare mattress. I was not excited about that, but made do. Waking up the next day covered in bed bug bites was the breaking point for me.

Man do those things itch!

Not how I wanted to remember my final night in my beloved Guatemala, but hey, we also got bed bug bites once in London…

Gratitude Moment: Today I am grateful for Hydrocortisone cream. Although it does not completely stop the bites from itching like crazy, it does help tame them a little.

Hi and welcome! We are Tim and Joanne Joseph and we have just embarked on our "next chapter". At a stage in life where traveling the world, taking pictures, and sharing our adventures with friends and family will be our dream come true.
View all posts by Tim and Joanne Joseph →
This entry was posted in Central America, Guatemala and tagged Church, Coban, Guatemala, Market, Photography, Quetzal, Travel. Bookmark the permalink.

11 Responses to Coban Marketplace and the Quetzal