There are sections of small rolling hills here compared to the flat farmlands of Illinois that I have become familiar with on frequent trips to visit Tim’s family. But the slight changes in elevation, are short-lived and we pass through miles and miles of corn and soy bean fields, broken up by cattle grazing on large open ranches. 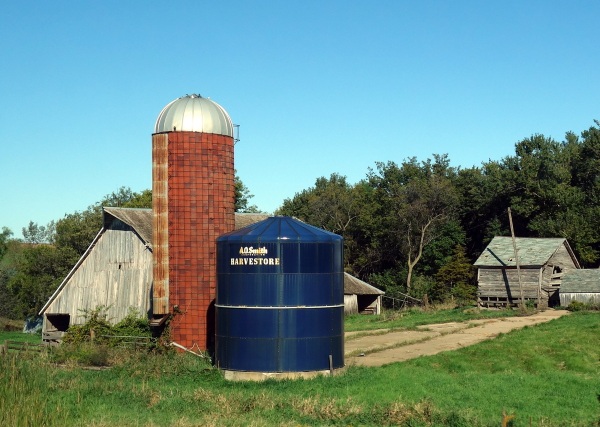 And some renewable energy.

Even the gas station was in the shape of a barn! 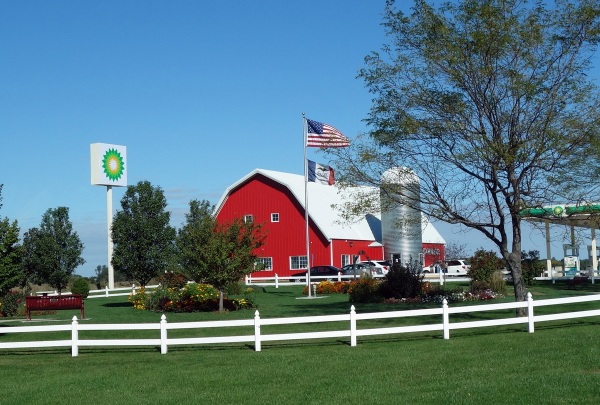 After a couple of hours we say goodbye to Iowa and move into South Dakota.

There are not a lot of things to see or do along the 90, the highway that will take us from Sioux Falls to Rapid City, but even 200 miles away, we are starting to see signs for Wall Drug Store. I would love to know how much they spend on advertising, as every few miles we are reminded that we must stop there for anything from 5¢ coffee, to ice-cold water, to see dinosaurs, or ???.  You can click here to see more examples of the creativity they put into their signs. 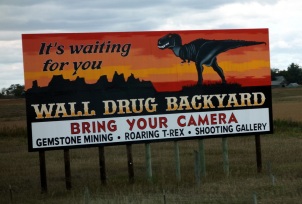 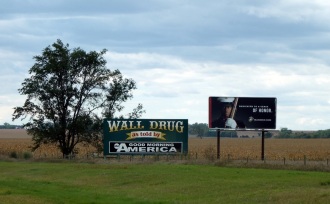 But the highlight today was seeing the “World’s Only Corn Palace“.

I’m not sure I’m ready for this one…

Located in Mitchell, South Dakota, “this uniquely American folk art icon” was built in 1892. The exterior and parts of the interior are decorated with corn, grain and grass in a theme that is changed each year. The building is used for concerts, basketball games, stage and trade shows, rodeos, and a variety of other activities.

They were in the process of a major renovation when we stopped in, but it was fun to see this “folk art wonder on the prairie”.

We were following the Purple Heart Memorial Highway. 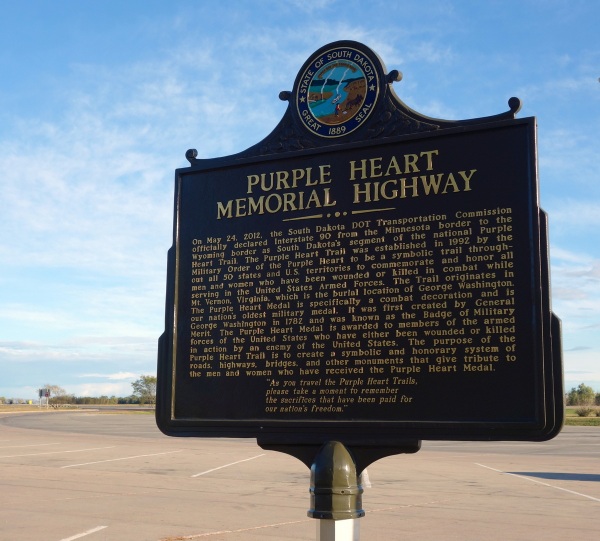 “The Purple Heart is specifically a combat decoration and it is our nation’s oldest military medal. It was first created by General George Washington in 1782 and was known as the Badge of Military Merit…The Purple Heart is awarded to members of the armed forces of the U.S who are wounded by an instrument of war in the hands of the enemy and posthumously to the next of kin in the name of those who are killed in action or die of wounds received in action. The heritage it represents is sacred to those who understand the price paid to wear it.” ~ PurpleHeart.org

The Purple Heart Trail was established in 1992, and intended to be a route throughout all 50 US States and territories to commemorate and honor all men and women who have been wounded or killed while serving in the military of the USA.

At the bottom of the sign, we are gently reminded to give thanks and appreciation to those that have given so much to ensure our freedom.

“As you travel the Purple Heart Trails, please take a moment to remember the sacrifices that have been paid for our nations freedom.”

How grand, how empty, how magnificent

How could I not today give a special “THANK YOU” to all those men and women that have made the sacrifice to serve our country. My grandfathers, uncles, father, father-in-law, cousins, a niece, numerous classmates and friends have enlisted in the service. Some volunteered, were drafted or chosen by lottery. Some spent the minimum time, others made a lifetime career. They were separated from family, parents, siblings, children and their community. Many came home wounded, mentally changed, sometimes unappreciated, suffered from PTSD, or became alcohol or drug addicted. Some did not come home at all or were in a flag covered coffin.

I am grateful that our country is finally recognizing the price that has been and continues to be paid for all of us, be it through a metal or designated highways. I hope that the trend continues and that when our warriors come home, they are warmly received and fully appreciated.

Hi and welcome! We are Tim and Joanne Joseph and we have just embarked on our latest adventure. We hope you will join us!
View all posts by Tim and Joanne Joseph →
This entry was posted in Iowa, South Dakota, United States and tagged barn, Corn Palace, farmland, Iowa, Memorial Highway, Photography, Purple Heart, South Dakota, Travel, United States, Wall Drug, Wind power. Bookmark the permalink.