An early nine-hour tour got us up at 6:00 a.m. and on the road by 7:30.Today’s outing was labeled Gullfoss, Geysir and Hot Spring and cost $149.75 USD per person. Described by Royal Caribbean as:

“A tour that takes in some of the most famous sites and sights in Iceland! The neo-volcanic rift at Thingvellir (A UNESCO site), a natural hot spring sauna experience, the spouting hot springs at Geysir and the spectacular Gullfoss waterfall. Traveling through what is considered to be the Golden Circle, an area of volcanic and natural wonders treasured above all others by Icelanders.”

This UNESCO World Heritage Site took us to where the world’s oldest legislative parliament met. It sits at the convergence of the American tectonic plate and the European/Asian plate.

At some places in the world where the plates meet, they collide with one plate going under the other, forcing one plate to rise up, such as we see in California along the San Andreas Fault line. But here in Iceland, the two plates are splitting apart instead. We had the opportunity to walk down inside the crevice where the fault line has created quite a gap. What an amazing opportunity! 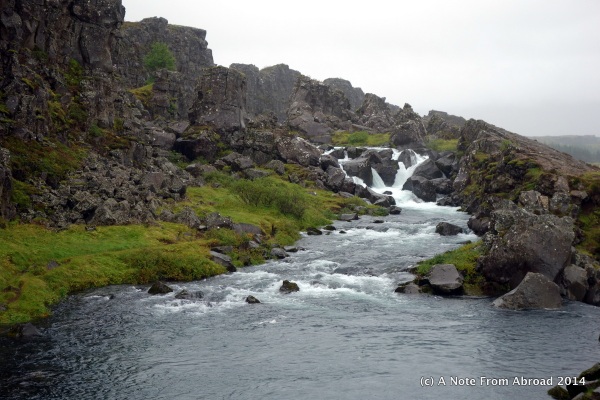 Women were drowned in this pool for committing adultery

The view out from the meeting site

After a shower and donning our bathing suits we walked outside and quickly entered steaming pools of water. They varied in temperature, but we were quite content in the 38 C natural pool with large rocks to sit on. Followed up with a sauna before changing back to our layers of warm clothing.

One of the pools at Fontana Health Spa

This two tiered waterfall is one of the wonders of Iceland and I can see why they are so proud of it. Even from way above the falls, looking down one got a feeling for their grander and power.

Tim and Joanne at Gullfoss 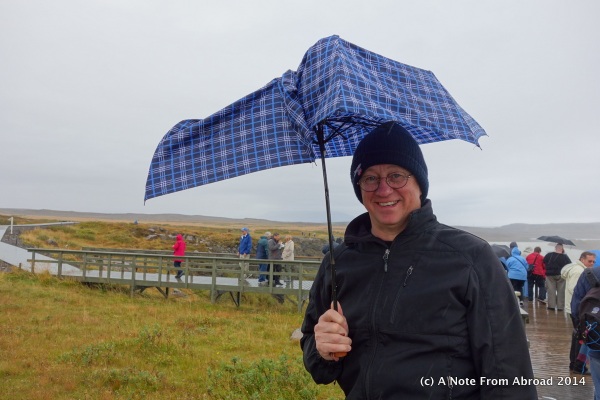 Our lunch was included and consisted of a bowl of Icelandic soup made from a warm broth, a couple chunks of lamb, and a mixture of vegetables including carrot, onion, and rutabaga. I only ate a small portion while waiting for the main course. I soon realized that the small dinner roll, butter, water and a minute piece of chocolate bar (about as much as in one Hershey’s Kiss) completed the meal. After eating like a king (or perhaps like a pig may be more accurate) ever since getting on the ship I was stunned. My dear husband thought my reaction was funny as I kept repeating, “no, surely there is more”.

They have their version of “Old Faithful” called Strokkur, a geyser that erupts every few minutes. People lined up along the fence, jockeying for a front row position to try to capture a shot as it burst forth. I was excited to capture the bubble just before it exploded and shot boiling water straight up toward the sky, and then the receding waters as they rushed to refill the gaping hole.

Geysir bubble just as it was erupting

I later walked the lower pathway and took this picture upward toward the crowd waiting for the next “show”. 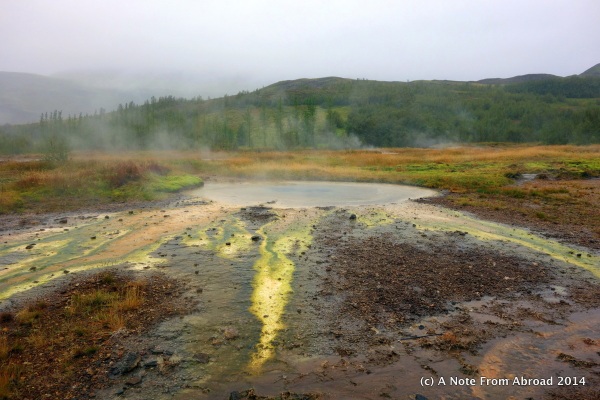 A volcanic crater that was formed about 6500 years ago.  It lies in a row of craters known as Tjarnarholar, located in the Grimsnes area.

It reminded me of Crater Lake near where I grew up in Oregon, but on a smaller scale. This crater was probably formed when a small magma chamber beneath the crater emptied after an explosion and then the land collapsed. Groundwater filled the caldera up to a level that varies from 7 to 14 meters, depending upon the water table.

Funded by Yoko Ono, the tower is illuminated with a beam shooting up into the sky every year from October 9th, John Lennon’s birthday until December 8th, the date he was assassinated.

Gratitude Moment: Today I am grateful for those peacemakers around the globe who truly believe that peace is possible and have devoted their lives through literature, prayer, music, lectures, peaceful protest or legislation toward making it happen. We have shed light on Nelson Mandela, The Dalai Lama, Martin Luther King, Mahatma Gandhi, Mother Theresa, Bobby Kennedy to name a few. May OUR generation be successful!

Hi and welcome! We are Tim and Joanne Joseph and we have just embarked on our "next chapter". At a stage in life where traveling the world, taking pictures, and sharing our adventures with friends and family will be our dream come true.
View all posts by Tim and Joanne Joseph →
This entry was posted in Europe, Iceland and tagged Brilliance of the Seas, Crater, Cruise, Geysir, Gullfoss, Iceland, Imagine Peace Tower, Kerid, National Park, Photography, Royal Caribbean, Thingvellir, Transatlantic, Travel, UNESCO. Bookmark the permalink.